Hubby and I tend to avoid restaurants with lots of publicity, as in it has been repeatedly featured, in big name newspapers, magazines, TV shows, etc. To this day, I think our single worst dining experience was Joe's Shanghai of Manhattan's Chinatown. The 2-hours wait in the northeast bitter cold, the rude young hostess who treated people like dirt because dare they want to eat at her restaurant, the scalding hot soup dumplings that burned all of us who took the first bite, the greasy "soup" that spilled out from those dumplings, still pink with curdles of bloody run-offs. Yeah, suffice to say I was traumatized.

So when hubby's colleague A-san visited us from Tokyo last fall and he wanted to go to R & G Lounge, my first reaction was, not that again! R & G Lounge has been featured extensively, you see. Anthony Bourdain nibbled on bites of their salt & pepper crab specialty back in 2010. And then there's A-san's Japanese sightseeing guidebook listing all the famous dishes one should definitely try.

Hubby snapped this calligraphy of this Bo Zhuyi poem to read while waiting for our food ^.^ 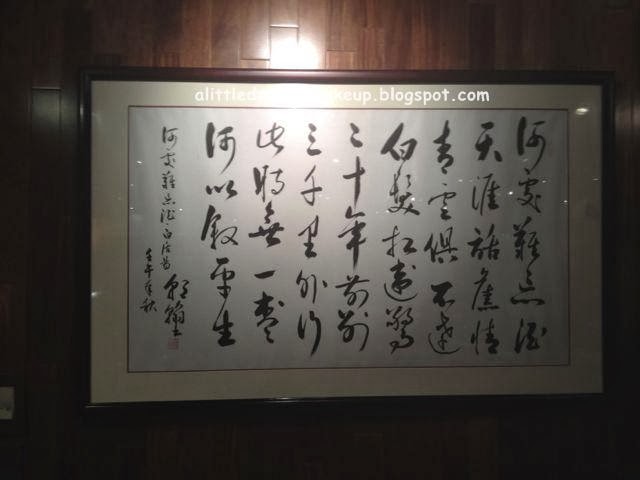 In the end, we couldn't say no to A-san. His enthusiasm for food was contagious. In the spirit of adventure (well, not really...) and hospitality, we caved and took a taxi to Kearney Street. It was around 7PM. The crowd was ridiculous and we were told the wait would be 1 hour and 45 minutes. Forget it, we made a reservation for the next night instead. The hostess was nice though, not fake-nice or pretend-accommodating. She was just nice, which was already a sharp contrast to that snot-nose at Joe's Shanghai. I actually looked forward to dining there.

We arrived 20 minutes early to our 6:30 reservation to find a crowd already gathered. There was a last minute guest for the night, H-sensei who flew in from NYC for the same conference A-san was attending. She was a longtime friend and colleague to K-sensei, who is advisor to both A-san and hubby, so their elder, basically. So our casual dinner suddenly because more formal, and so we backed off and let A-san go to town with his guidebook suggestions. It was a funny sight when the food came out. Hubby was chatting away with H-sensei while A-san and I snapped away photos of the food ^.^

The spread was perfectly sized for 4 people:
- Hot and Sour Soup (left): guidebook recommended but I thought it was just okay.
- A special green vegetable stir fried with whole garlic (right). I actually forgot to ask what it was, but the guidebook recommended it also. The online menu is actually not complete and the in-house menu is much larger. That's to say I can't find this dish online either. It was alright. 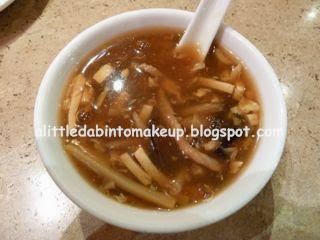 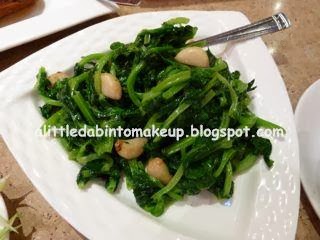 - Scallops with Ginger and Snap Peas: also okay. Nothing special.
- Clams in Black Bean Sauce: the supporting role of the show. This was delicious! The black beans sauce can get very strong and salty but this was well balanced, complete with a touch of sweetness. I remember watching H-sensei scooping up the sauce into her bowl to mix with her rice. I followed in the path of my sagely elder. Monkey see, monkey do, but there was wisdom to be savored in the mix. Tasty was the verdict. 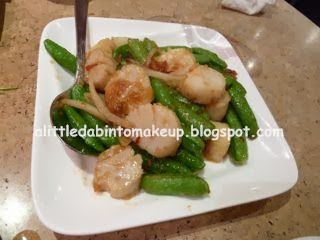 - Baked Black Cod: one of the stars of the show that totally stole the show and then some. God, this fish was heaven on a plate, easily the best cod I've ever had! Aside from the occasional sushi, we don't usually go for fish when dining out. I do cook fish at home but again, infrequent. But I digress. I'm still kicking myself for not taking a picture of the actual meat inside, which I used as an excuse to go back to R & G Lounge for our 12-years anniversary back in January :P May be I should apply to work here as a dish-washer, or floor-mopper, or deep-frier, or vegetable-chopper, anything that would allow me to stay in the kitchen to spy on the chef's secret. Just look at that darn cod! It was caramelized on the outside, slightly crispy around the edges, with the meat inside cooked through but not overcooked, retaining all the moisture as to jiggle like silken tofu and slightly translucent like porcelain. I died with each bite that melted in my mouth. Damn. You bet I'll be back for more, and I'll bring all my friends and family. 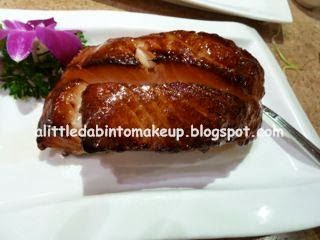 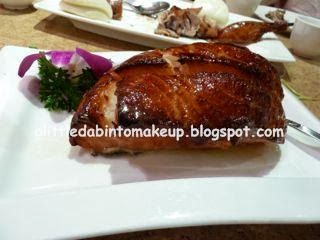 - Peking Duck, half: another star of the show that got its red carpet pulled from the underneath its feet. This was also delicious, although slightly greasy as expected of duck. Loved the thin and crispy skin. The meat was tender and chewy and well flavored.
- R & G Special Beef (secret recipe): this looked yummy but turned out to be oddly sweet. I enjoyed how tender the beef slices were inside their crispy outer shell, but they were too sweet. A-san joked (in Japanese, and in a whisper) that the secret recipe was the leftover beef and they had to douse it with sugar to mask the bad taste. OMG he was so mean LOL! But yeah, I won't order this again. 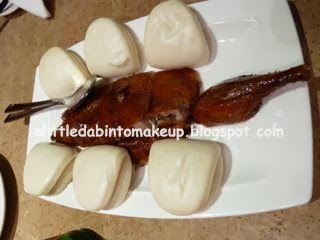 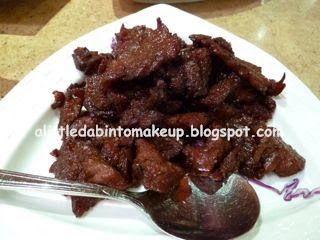 Anyway, hubby and I went back in January. Because our first taste of the cod, the duck, and the clams were so phenomenon we had to try again and confirm it wasn't just a fluke. The waitstaff was nice as the last time, and our waiter didn't hesitate to tell us we'd ordered way too much. Hubby's prepared reply is always, "She wants leftovers," which is a complete truth. Whenever hubby and I go out I always order enough for at least two meals. I did tell you I'm a piggie. That was not a joke.

We tried something different this time, and we were about to order to special house fried rice when our waiter suggested we try the sticky rice instead. Sure, why not? So glad we took his suggestion!
- House Special Sticky Rice: superb with bits of sausages and BBQ pork. Careful though, sticky rice is not like your average Jasmine rice - it's glutinous and it's very filling. Just 3/4 of small bowl later and both hubby and I were stuffed. There was about 70% of the sticky rice left which we took home and enjoyed the next day, and the day after that ^.^ (did I mention it's very filling?). Will definitely order again!
- Black Mushroom and Mustard Greens: also yummy and well flavored. The mushrooms were jelly-like and chewy at the same time. Yum! 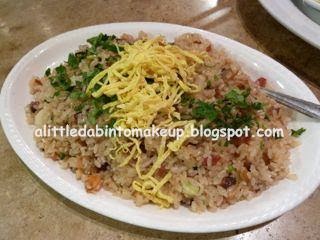 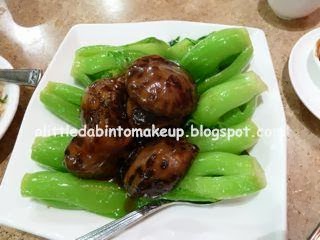 - Clams in Black Bean Sauce: yes, again, you know, for quality check :P It passed.
- There's a new option now to order a small lobster tail if you just want a taste of the different cooking styles. We ordered one and asked for it to be done with the Black Bean Sauce, thinking of the yummy clams. It came out steamed with a huge goop of black bean paste on it - emphasize: paste, not sauce! Not at all what we had in mind. And I told you this stuff is pretty strong and salty, so we had to scrape the paste off and whatever smears leftover was enough to flavor the lobster. Not trying that one again. 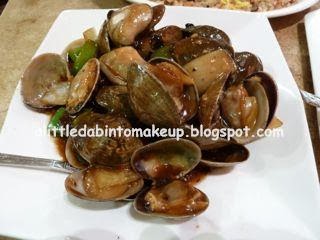 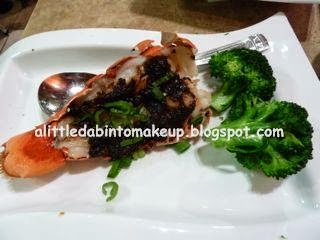 - Baked Black Cod: what, I came back for the picture of the meat inside, remember? Damn, it was as good as I remember, although I wished they had caramelized this piece a little better so that it's crispy like the last piece. But I didn't complain. Nope. We ate half and took the rest home again. 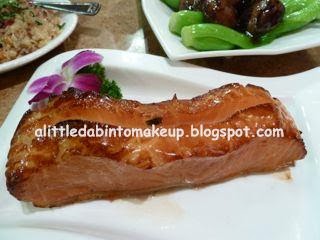 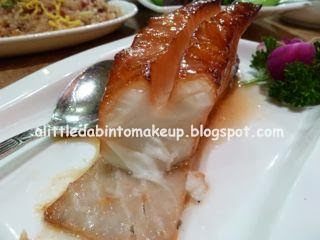 - Peking Duck, half: yup, again. We didn't leave a bite of this behind because it was just that good, and Peking Duck wouldn't be any good the next day anyway. 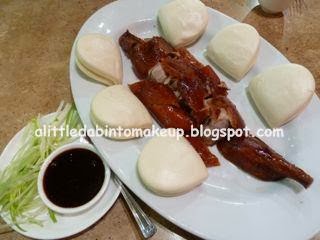 Had room for dessert, of course! Red bean and tapioca dessert soup, which was good and not too sweet at all! 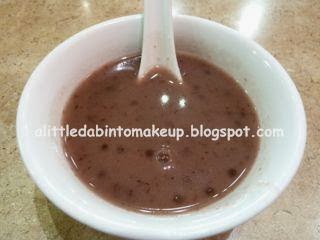 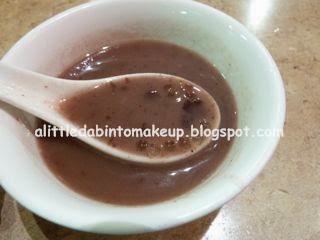 I will have to skip this post I'm on diet! T_T

But Chinese me want!