I'm 2/3 of the way through the 50mL/1.7fl oz. this mister bottle of Jurlique Rosewater Balancing Mist. Like Boscia Balancing Facial Tonic, this is a multi-purpose mist to be used as toner right after cleansing or throughout the day as needed. After "demoting" the Boscia tonic to daytime freshener use, I started using this Jurlique one as a toner instead.

Even though both Boscia and Jurlique products are runny and watery, the Jurlique Balancing Mist feels substantially more moisturizing while still maintaining that super watery light, barely there feel. In fact, on some nights I spray this onto my neck and décolletage and it feels adequate just like that! That said, in contrast with the alcohol-free and unscented Boscia, this Jurlique mist is scented and contains alcohol! Note alcohol as the second ingredient on the list, although since this is coming from Australia I'm not sure if the listing order signifies concentration. As for the scent, it is a very strong rose fragrance. It's not perfumey or fake but more herbal, and either way it took a while for me to get used to. So it really depends on how much you like roses and rose fragrances. 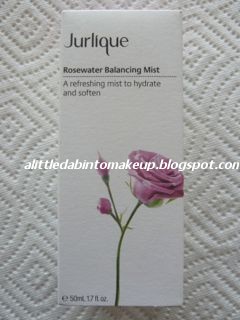 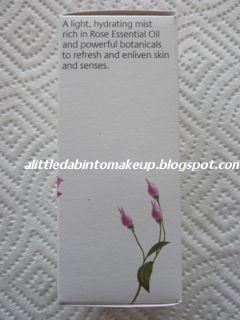 Continue reading »
Posted by D. at Sunday, August 11, 2013 No comments: Links to this post

Back in early May, after accidentally discovering the winning combination of SK-II Facial Treatment Essence, Facial Treatment Clear Lotion, and Astalift Jelly Aquarysta works really well for my skin I immediately took it to the internet to restock my supply of SK-II.

Of all the online options, ironically I found buying directly from Japan was most economical, even with international shipping. It's not that the US retailers were marking them up - they actually retail for cheaper here when you consider the exchange rates! It's more like Japanese (and Taiwanese, Korean, HK, Singaporean, etc.) retailers often bundle gift sets with full size purchases, so in paying full retail, I also get more than just the full size item. And I don't know about other places, but gift set bundles are available year round in Japan, though of course they get super crazy around special events and holidays. 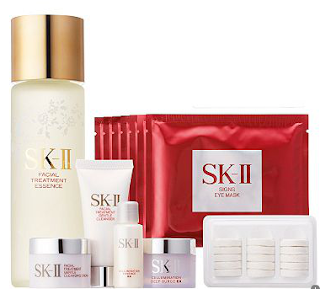 ***Screencaps from Isetan JP.
Continue reading »
Posted by D. at Friday, August 09, 2013 No comments: Links to this post

Ulta offered a decent GWP back in May, just the right excuse I need to pick up the 4 new Revlon ColorBurst Lip Butter as well as the Nivea Lip Butters I spotted from Citrine.

Ulta GWP May 2013. All pictures taken in natural light without flash. 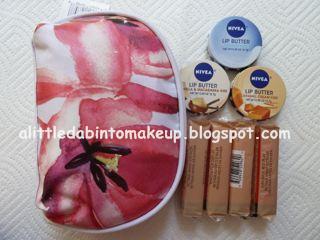 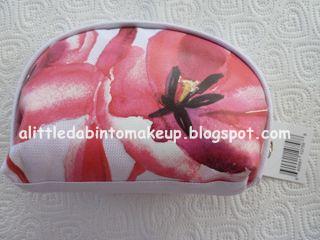 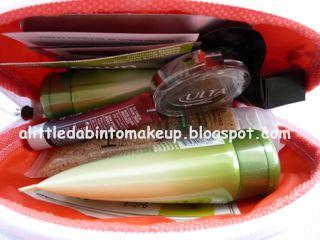 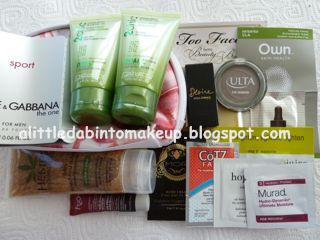 I finally finally got to the rest of my Revlon ColorBurst Lip Butter ^.^ So far, I've collected 18, with the exception of 30 Fig Jam (too brown) and 60 Gumdrop (too pale), plus the 4 new colors, which I will post next.

I have already reviewed 001 Pink Truffle, 025 Peach Parfait, 045 Cotton Candy, 050 Berry Smoothie, 070 Cherry Tart, and 085 Sugar Plum in detail, along with their texture and wear, etc., so there will only be color descriptions in this post. I will say, though, that there are many colors in this batch that are just utterly unwearable for me. It's too bad, but I expected this, sort of. After all, it's a range of 20 colors and some are bound to clash, but I guess I was hoping to be able to wear more. Oh well. 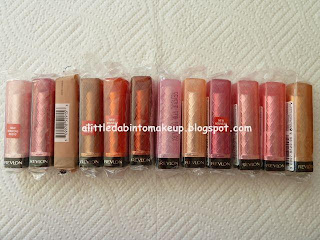 Continue reading »
Posted by D. at Sunday, August 04, 2013 No comments: Links to this post

Almost through with this 60mL/2fl oz. deluxe GWP tube of Lancome Creme Douceur Cream-to-Oil Massage Cleanser. Having been introduced in summer 2011, it was promoted as a part of the Nordstrom Spring 2012 Cheek GWP. However, I'd been away until fall 2012 and couldn't get around to using it until now. Oh well.

Despite the prevalence of oil cleansers in Asia, they've only come around to main stream American consumers within the past few years and even then, quite slowly. I do admit that the stigma of "oil" as something "icky" and problem-causing is pretty hard to dispel. In my own case, it took me a year in Japan to work up the nerve to try an oil cleanser. My first was DHC Deep Cleansing Oil back in the fall of 2007 and it was only with the Oil Cleansing Method the year after that my fear of oil was gone for good. Since then, my religious daily use of Japanese sweat and water resistant sunscreens has a huge role cementing my loyalty to the oil cleanser camp. So a cream-to-oil cleanser from Lancome? Bring it.

The Nordstrom Spring 2012 Cheek came with Renergie Lift Volumetry 15g, Volumetry Eye 7g, both of which went to my mum, Color Design Lipstick in Fashion Icon, this Creme Douceur Cream-to-Oil Massage Cleanser, Visionnaire Advanced Skin Corrector 7mL (will review next!), and Tonique Radiance 50mL/1.7fl oz. Despite what the screencap lists, I received slightly different items my GWP, not that I'm complaining, mind you ^.^ 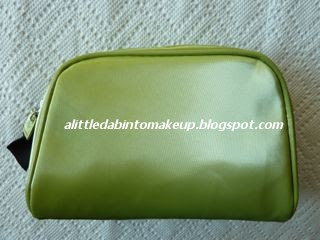 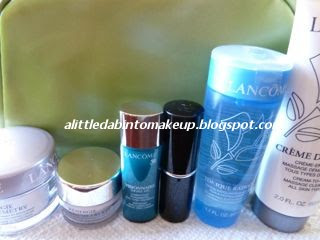 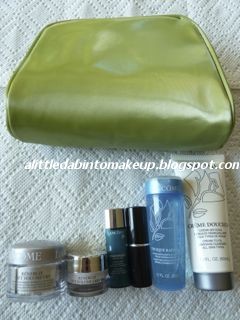 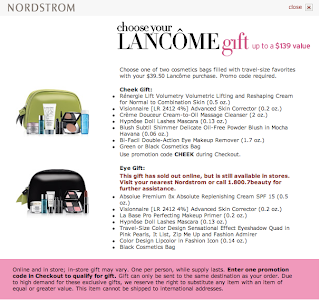 Continue reading »
Posted by D. at Saturday, August 03, 2013 No comments: Links to this post

I have a few of these 30mL/1fl oz. bottles of Clinique Clarifying Lotion 1 and have been taking them with me on travels here and there in the past year. I've been meaning to review these, but keep forgetting :( Clarifying Lotion 1 is the second mildest toner from Clinique, after the Mild Clarifying Lotion, both marketed towards very dry to dry skin. The only difference is the that the Mild lotion is alcohol-free, and this Lotion 1 contains alcohol. 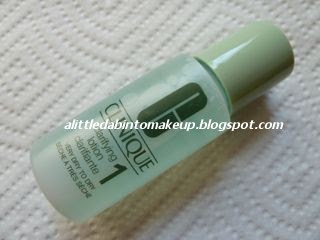 Continue reading »
Posted by D. at Friday, August 02, 2013 No comments: Links to this post

A long overdue follow up for SF Japantown, since these pictures were taken back in April-May T.T 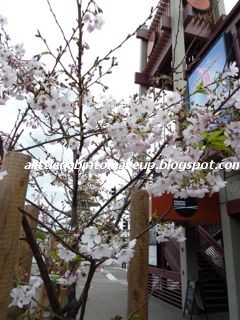 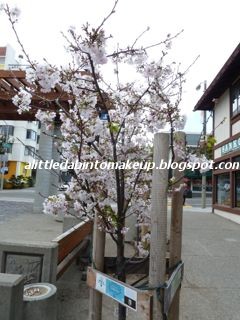 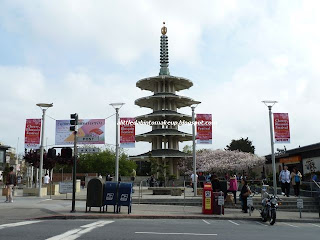 I'm loathed to say this, but the Japanese food at Japantown leaves little to be desired. How ironic that it's Japantown, and you would think there are things reminiscent of Japan food wise. But nope. What you see may resemble Japanese food in appearance, and with the exception of a couple of okay places, the rest are either meh or down right disgusting. 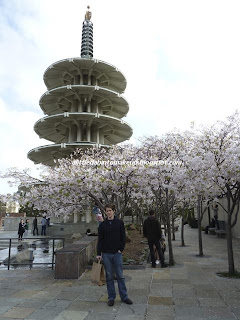 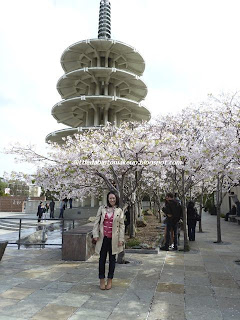 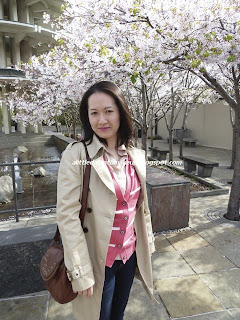 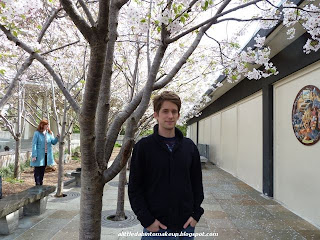 Continue reading »
Posted by D. at Thursday, August 01, 2013 No comments: Links to this post