Thanks to Ratzilla who pointed out that the picture posted below is actually of the revamped 2009 version, renamed Precious Barrier Sunscreen WaterTouch. The 2008 Allie Comfortable Sunscreen EX Watertouch had been discontinued as of 2009, so I had been sloppy in calling it the 2008's "new packaging." My bad!

By the way, this 2009 version had also been discontinued as of 2010. I haven't even gotten around to reviewing mine yet, and I think I'm not going to. Looks like Allie is going to change the formula yearly, and plus the naming convention is getting more and more convoluted and confusing (what's with the "N"?), so I'm not going to bother chasing after them.

I switched from my favorite Allie Comfortable Sunscreen EX Perfect to EX WaterTouch simply because I ran out of the former. Yep, I ran out of it while away on vacation, and the only sunscreen we had with us then was the EX WaterTouch version that hubby was using because he didn't want to fuss with the oil cleansers and whatnot. So yes, this EX WaterTouch version is the non-waterproof version of the Allie sunscreen that does not need an oil cleanser for complete removal. 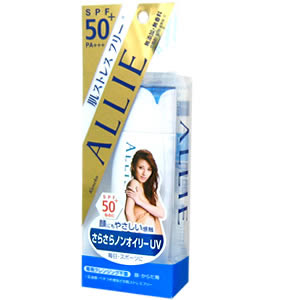 And guess what - I totally fell in love with it. Even after coming home to more EX Perfect, I actually continued to use and preferred EX WaterTouch. How can that be, right? There were reasons, of course, the most important of which was that I couldn't wear my Cetaphil Moisturizing Cream with EX Perfect. Yes, I did say I didn't need extra moisturizer with EX Perfect, but mind you that review was written back in September when it was still very humid outside. Came January, I returned home to a total drought and then went on to battle skin dehydration, so going without a moisturizer was no longer an option for me.

Another surprise was that I didn't have any problem rubbing in EX WaterTouch over my moisturizer! It rubbed in fine, just like the Sofina Perfect UV once did, and dried down to the usual semi-matte finish. It even performed well with an extra layer of the hydrator (see my Moisturizers VS. Hydrators post), the Clinique Moisture Surge Extended Thirst Relief (will review very soon, I promise!), that I layered over my moisturizer to help with my skin's dehydration. Oh, and I suppose an added bonus would be the fact that I could totally skip my oil cleanser whenever I don't feel like using it, since EX WaterTouch doesn't not require an oil cleanser for complete removal :D I'm super lazy, I know.

Of course I will have to switch back to EX Perfect, or at least a more substantive sunscreen, at some point when it gets more humid outside. Because EX WaterTouch is not waterproof, the humidity will, more or less, do away with it by the end of the day. For now though, it's EX WaterTouch all the way! :D

Not sure whether you know but you're either linking to the wrong product or you're mistaking yours for something else.

The sunscreen pictured in your post is actually the Allie Precious Barrier Sunscreen (Water Touch) -from 2009-, which is not the same thing.

Allie Comfortable Screen EX (Water Touch) -from 2008- in your post is actually waterproof.

Yes, I do know I posted the revamped 2009 version. When I was reviewing the 2008 version, it had already discontinued and I had thrown out my bottle/packaging without taking a picture, so I lazily grabbed the current picture from Adambeauty.com. But you're right, I should have known better and a search for the correct picture wouldn't have taken much. I will update my review accordingly. Thanks for the note.

Of course, by the time I come around to review this 2009 version, it had also been discontinued this year. Urgh.

As for the waterproof-ness, the most I will give it is water/sweat-resistant. As much the product claimed to be waterproof, I'm afraid it wasn't.

By the way, thanks so much for translating the ingredients for many Japanese skincare products. It's very helpful, and I hope you don't mind I link to your site for them.