I know I'm just now posting this, but the below were all pre-holiday appetite whetting, not that I was eating the darn (albeit yummy smelling) soaps or anything...

Anyway, I'm not sure if my family/friends are all sick of soaps now since they get soaps from me a lot :X Don't get me wrong, I never ever EVER sell these soaps for money. Most are given to my immediate family or to close friends/colleagues. I only keep a few to myself and hubby to use. And yes, everyone got even more soaps from me for presents this holiday :D So there will be a major soap post coming soon in January LOL!

- Oatmeal Milk & Honey Exfoliating Soap: after the very first use, hubby exclaimed "Wow, I love this soap!" and asked me if we have any more of it. Given that he rarely expresses such enthusiasm with any of the stuff I blog about, this bar of soap was impressive indeed. Its name makes you expect a warm and sweet scent, but it had a warm and woodsy scent instead, which was why hubby liked it so much. The soap itself was also surprisingly milder than most soaps from Anderson Soap Company. Loved it and will probably buy again and again. 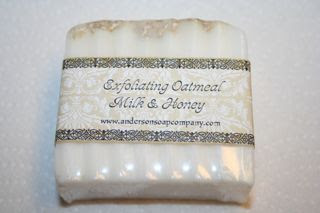 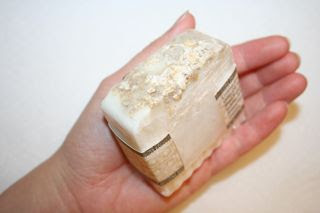 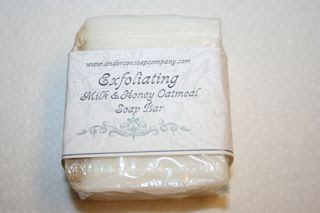 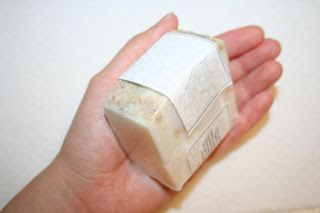 - Peppermint Oatmeal Exfoliating Soap: this soap smelled heavenly pepperminty but not too overwhelming like the Heathen's Hearth Tea Tree & Peppermint Glycerin Soap below. I'm using this right now while visiting with my folks. Out here, it's brutally dry and I'm very thankful this soap hasn't crack up my hands yet! 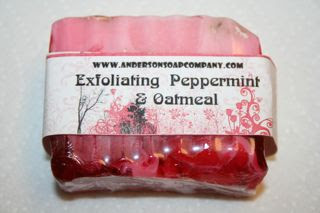 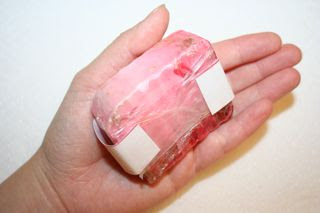 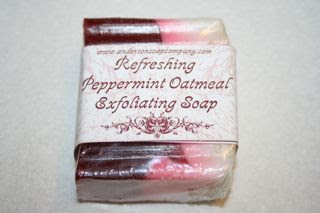 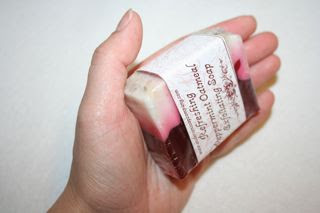 - The Body Shop Daisy Soap: I bought this soap because for some reason, when I saw "Daisy Soap" I thought, aww...how cute, soap with a daisy picture on it. Little did I expect for it to smell like a freakin' daisy bush too! Yikes. I'm soooooo not a floral person and this bar went straight to my mum, who probably appreciated it more than I did. 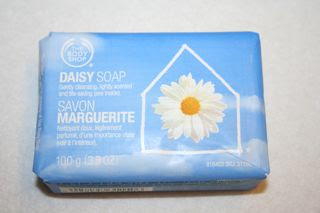 And the last of my Heathen's Hearth bars.

- Tea Tree & Peppermint All Natural Glycerin Soap: This bar made an appearance in my very first Soap Crazy post. I love peppermint anything and had wanted to keep it to myself but in the end, it became a present to a dear friend, who peeled the wrapper back to give me a whiff of the soap. The tea tree and peppermint combination was ridiculously fresh and invigorating, and soon after I went back for a second bar for myself. When I was communicating with the seller, she mentioned she had 2 types of Tea Tree & Peppermint soaps, one regular and one with activated clay, which turns the soap black. In fact, the label on the bar below had a line that was crossed out with black marker, that line was supposed to say "with Activated Clay." Now I'm fine with black soaps, but I wanted to the try the regular bar since that was what my friend let me smell and I LOVED that smell! So in the end I went with the original, good ol' regular bar. 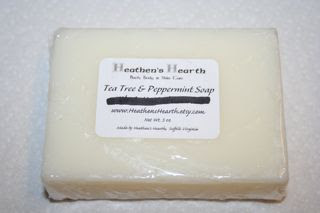 But boy, oh, boy I got a bit of a shock when I actually got my bar. Before removing the plastic wrap I smelled the soap again and it smelled like what I had hoped. Then I peeled back the wrap and took a whiff, just like I had done with my friend's, and thought, hmm, it smelled...different. Very different. This time, the tea tree and peppermint combination was much, much, stronger than the bar I first bought for my friend. So strong that it began to smell like...gasoline. I mean, woo wee, it stank! I quickly got rid of the plastic wrap, thinking it was just the concentration of the scent that repulsed me. After all, these soaps are scented with oils, which are all pretty damn potent. Sadly, however, after more than half way through and the bar still had this lingering odor of gasoline, I concluded that this batch of soap was unfortunately botched and over-scented. Yuck. So glad my friend's bar was way better. I guess that's the risk with hand-poured/homemade soaps. Each batch is made slightly different than the last, and sometimes, that difference is killer! 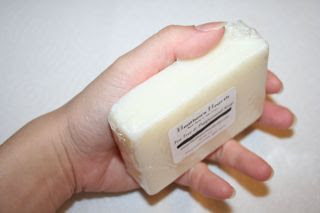 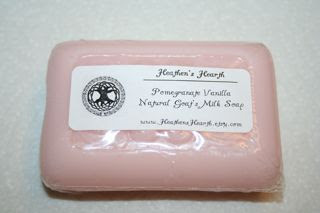 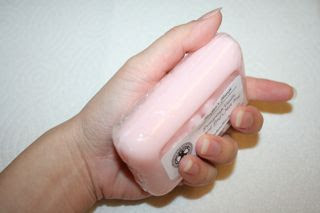 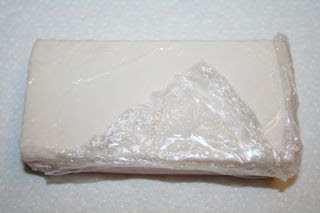 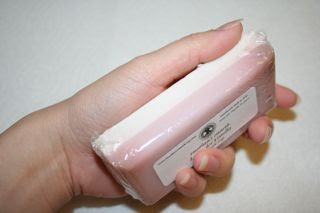 - Oatmeal Milk & Honey All Natural Goat's Milk Soap: I also have a thing for the combination of oatmeal, milk, and honey and I have several bars of soap in this exact same scent from different Etsy shops LOL! Anyway, so it was hard for me to part with this bar too, but it ended up going to another friend. 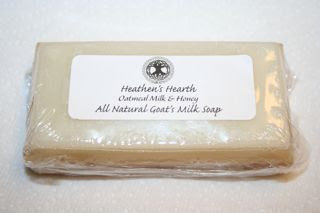 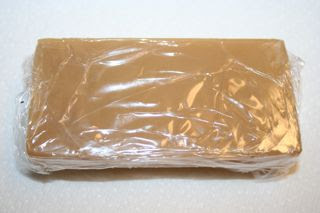 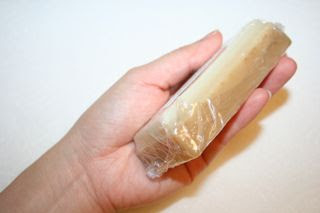 - Vanilla Brown Sugar Natural Goat's Milk Soap: I was hoping for something more original but this turned out to be the Bath & Body Works-type Vanilla Brown Sugar. Yeah, I was a bit disappointed, so off it went to yet another friend. 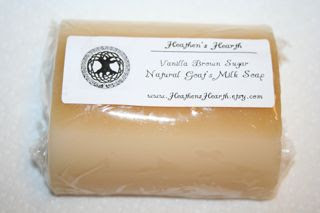 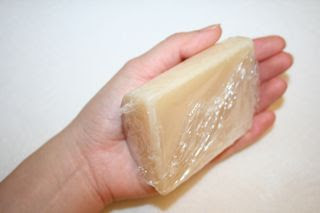 - White Tea Natural Goat's Milk Soap: Same here. I was expecting a tea-like scent, what I got was spiced tea, which was really too spicy for me. I passed it on to a dear friend who loves tea. 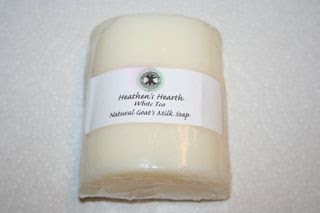 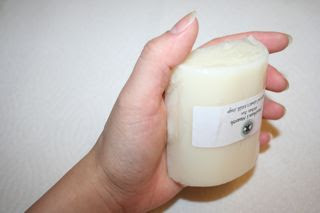 - Pelican Rice Bran Amino Soap: Pelican is a Japanese brand, but all I could find was another soap they make though, the Deitanseki Clay & Charcoal Facial Cleansing Bar for sale at Amazon.com, nothing else though, unfortunately. The Rice Bran Amino Soap itself was just okay. It smelled good, a light soft scent, but upon washing there was another slight odor very similar the plastic-y foamy odor in cold process soaps that I hated. Luckily, this odor didn't linger on and went away quickly as soon as my hands dried. Other than that, the soap was very drying. I've read that rice bran is a very gentle and mild ingredient in cosmetics, but this soap sucked the moisture out of my skin and turned it into a dry twig. So yeah, I probably won't buy this again. 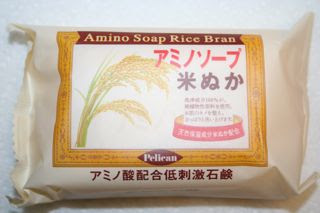