Somehow, I became a recipient of L'Occitane junk mails, but because of that, I ended up with a bunch of samples of this Immortelle Cream Mask. Of course I kept the goodies and recycled the rest :P Yeah, I'm heartless. Totally. 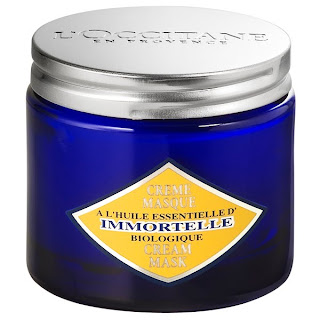 So being a cream mask, I'm supposed to goop this stuff on, leave it for 5-10 minutes and then tissue off the excess. Umm...no. While I'm sure this usage is beneficial for some, I preferred to use this cream mask like any other night cream, i.e. putting on a small amount, just enough to moisturize my face (and neck and decolletage). So just one sample packet lasted me 5-6 weeks, using once every 2 nights, and after finishing 2 packets, I...got sick of it...

Don't get me wrong, the stuff was nice. My skin felt super soft just after application, and the next morning it wasn't oily, which was very impressive considering how thick the cream was. Immortelle is an anti-aging line, so I had the expectation that this cream mask was going to be rich and greasy. And it was rich, but surprisingly was not greasy at all! In fact, it absorbed so quickly I couldn't spread it around fast enough and would often end up applying too much, which would then leave my skin with an odd dampness (thank goodness it wasn't sticky) that I didn't like.

Oh, and the fragrance. I must warn you that not only the cream mask was scented, it had a fairly unique scent I haven't seen among skin care items. It smelled like crushed dandelions. Given that the stuff contains immortelle flower essential oil, that fragrance made perfect sense, but that didn't change the fact that the scent was very different. So different, in fact, that according to the reviews I read, most people either hate it or love it. I happened to like it.

So why did I get sick of it? Probably because of the price. A 4.4 oz jar goes for a whopping $60! Yeah, that just sums it up for me - no thanks. I know that gigantic jar is probably going to last me lifetime considering one sample packet lasted 5-6 weeks, but I really don't feel like shelling out an outrageous $60 for a night cream, let alone wasting it as a mask. Why can't they make a smaller size and charge less? Hmph.