Wow, November is almost over already, eeps! Sorry I've been neglecting on posting, having my behinds royally kicked with classes and such. Today is the last day of class and exams are in 2 weeks, so I should be able to post something between now and then ^.^

Let's start (again) with this Tsubaki Tsubaki Water. I got this 250mL spray bottle from the Tsubaki LE Shining Water Gift Set at Don Quixote last summer. It's basically a spray on and leave in hair conditioner, which I usually stay away because they tend to weigh my hair down the next day and make it oily and greasy. But I've been using this for the past couple of months and it's actually very nice! 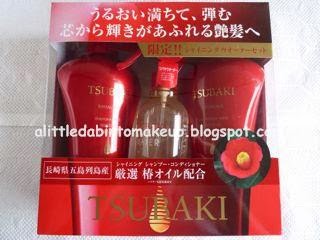 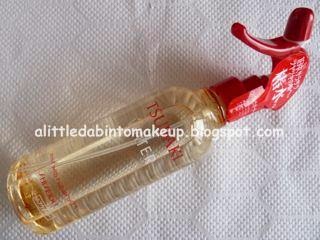 It smells nice, like the shampoo minus the slight cherry notes. It mists well, not shooting in streams. And it's very light. Basically, I wash my hair and whenever I'm too lazy to use conditioner in the shower, I would use this instead. Before brushing my hair after washing, I spray twice on each side - leaning my head, let my hair curtains over one shoulder, spray both sides, then repeat on the other shoulder, then brush through. It would immediately detangles my freshly washed hair. The next day, I would still have nicely conditioned hair that's soft and smells nice.

Overall, this is a nice product. There are a few water out there though, so I'll probably move on after this bottle is done. May be whenever it's warmer, I'll probably reduce to just 2 sprays, one on each side. For now, 4 sprays work well since I blow dry my hair a lot.
Posted by D. at Wednesday, November 27, 2013

I like this too. I should use it more, heh.

Yeah this and a similar Hair Water from Oshima Tsubaki, which I have a sample bottle of and am looking forward to try. I wonder how they compare for sure!