No, no, I haven't gone mad for Revlon. I've gone mad because I actually bought some Revlon!

I mean, what was I thinking? Revlon is utter crap! Hubby's mum was once loyal to this Revlon lipstick she'd worn for some 20+ years. And then when I started dating her son, I gave her a Lancome Le Rouge Absolu and she's never looked back since. And here I am buying Revlon. Shoot me. Now.

I first spotted these from a magazine. I don't remember if it was Allure or Elle, probably Allure. And then I saw several ads for them from some other magazine spreads. Blame the marketing, but I went out and bought a few, out of curiosity or whatnot. I guess sometimes stuff disappoint you in 3D, but these actually don't look so bad. I haven't tried any of them yet, so we'll have to see how they fare quality-wise later. For now, they're pretty to look at.

I got Golden Affair Sculpting Blush in 2 out of 4 shades available. And even though they're "limited edition," they're available still online even though they were out more than 2 years ago. They feel okay, not too silky but not rough to the touch either.
- Rose Rapture: A nudish tawny color and pigmented I'd say. The gold is sprayed on though. It would have been nice if it was actually embedded, but it's also Revlon, of course. 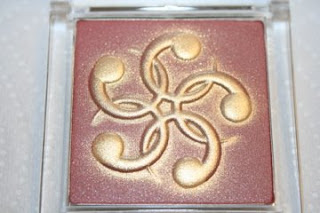 - Berry Daring: I don't what got over me when I bought this shade. It's a pretty deep berry color but it might be too harsh on me. And it's very pigmented too, so we'll see...Who knows, it might work out. If not... 9.9 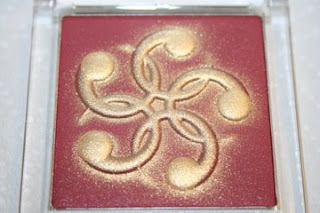 I also got all 4 shades of the Floral Affair Sheer Powder Blush. The reviews say these are very sheer, but I think they're just right, not too sheer, not too pigmented like the Golden Affair Sculpting Blush. I like how these look in the pan. Very pretty. And I could also use them on my eyes :D Oh, and these are much softer than the Golden Affair blushes too. 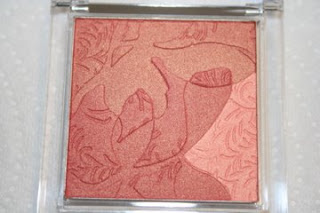 - Hushed Blush: I like this one the best because I can use the lightest shade as a highlighter too and it doesn't seem to be too pigmented. 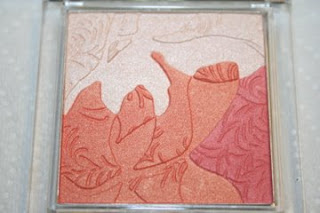 - Honey Bunch: probably the most pigmented one out of the lot. - Pinking of You: As you can see, this one is actually matte! And I usually don't like matte blushes, but it looks interesting and the pink is really bright and fresh. I'll have to try it out and see... 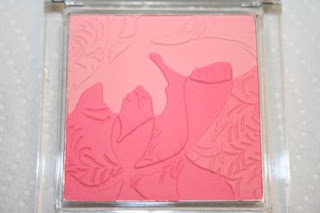 I also got 1 Make a Sheen Lustrous Shadow in Olive it Up. The other palettes didn't interest me at all but this one has the most beautiful olive and gold, both of which I love. Again, they feel average, not the most satiny eye shadow you've tried, but not crap either. Gotta see how they perform though, especially on my oily lids. 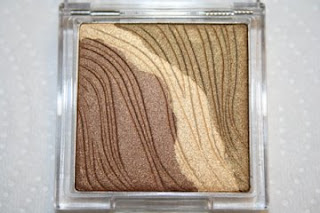 Clinique's stab at plumping lip gloss, I guess. And good thing I got this Full Potential Lips in Cherry Bomb as a GWP because I would never buy it full size.

It's nothing special, to be honest. In fact, there are lots of room for improvement on this one. First off, the stuff's waaaaay too sticky, much worse than Stila Lip Glaze, can you believe that? It took me several re-dips just to get enough gloss on my lips because it was just too thick to spread. Second, I didn't like the tingling feeling as the gloss works to "plump" my lips either. It wasn't an icy good minty sensation, but rather a weird tingling that made me feel like the gloss's gone bad. So did it actually plump my lips? Kind of, not really. It worked a little on my lower lip, but no effect on my upper lip. So yeah, I had weird looking lips for a while until I got fed up and wiped it off. Oh, and the color too, it settled in patches because the gloss was too thick for the color to spread evenly. Urgh. Now that I think about it, I don't like this gloss at all!

To be fair though, there are couple of good things about this stuff:
- It doesn't stink. Unlike the other Clinique glosses, this surprisingly doesn't have that nasty chemical smell. In fact, it barely has any scent at all, which is interesting.
- It does make my lips very glossy, but so do TONS of other glosses, so I guess this doesn't count :P
- The color is nice, very subtle like Cherry Chapstick. Now, if it would spread evenly... 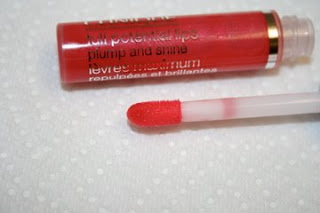 I'm in the mood for lipstick lately :D
These Clinique Colour Surge Bare Brilliance lipsticks are just right, not too pigmented but not too sheer. However, this also means they are thinner in consistency and not as creamy and moisturizing. Oh well, I wear them on top of base anyway, so it really doesn't matter. All pictures taken indoor with flash unless otherwise noted.

I have 3 Bare Brilliance lipsticks, one I bought and the other 2 are GWP:

- Pink Beach: a very pretty blush pink with hints of gold. When I first tried it on the back of my hand, it looked very subtle and muted. But then I put it on my lips and -bam!- it turned almost bubblegum pink with gold shimmers. What the hell? I still like the color a lot though :D 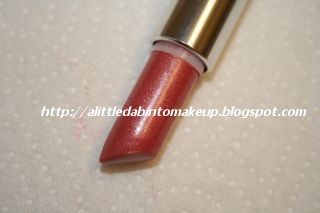 Continue reading »
Posted by D. at Saturday, April 26, 2008 No comments: Links to this post

The Clinique Long Last Soft Shine supposed to have moderate coverage, but in my opinion the coverage is pretty inconsistent. Among my 3 lipsticks, Red Red Red is very pigmented with full coverage, Bamboo Pink is moderate, and Golden Coral is sheer, very much like a Bare Brilliance lipstick. And I actually bought 2 out of these 3, so that's pretty unusual for me because I'm so picky with lipsticks that I rarely buy one unless I absolutely love the shade! The majority of the time, the cosmetic companies would have to bribe me into trying their new lippies, which explains why most of the lipsticks I own are GWP. Mind you, the purchases were seldom lipsticks :P

All pictures taken indoor with flash unless otherwise noted.

- Red Red Red: I have already reviewed this beauty in this Red Lipsticks! post, so I'm not going to bore you again with my babblings. 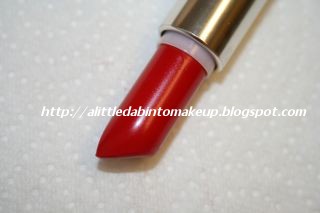 I actually don't know the difference between Le Rouge Absolu Creme and Le Rouge Absolu, but they feel great on my lips. Very soft and creamy and extremely pigmented, at least Rosiere is.

I have 2 Le Rouge Absolu Creme, one I actually bought and the other is a GWP :D After going post-less for nearly 3 weeks, I'm easing back slowly. I've been so busy for the past couple of months that sitting down to write a blog entry is such a production that I ended up bumming out and surfed the web instead :P

Anyways, back to makeup :D

These Lancome Rouge Sensations are the first lipsticks I owned. Well, not specifically these colors I am reviewing, I can't imagine holding on to a lipstick for that long - eww, but the line. The Rouge Sensations are decent, I like the Rouge Absolu line better because they are softer and more moisturizing. The Rouge Sensations are best worn with some sort of base, which I always wear anyway. I started out wearing lipstick by themselves, but then the intensity of most colors was just too much for me so I usually tone them down with a base - chapstick, lip balm, clear gloss, whichever happens to be nearby.

I only have the Rouge Sensations in 2 colors, both are GWP as I already threw out the ones I actually bought because they were so old and I take forever to use up a tube of lipstick!

- Mandarin Velvet: My favorite lipstick color, actually. It's such a natural tawny red that I just dab it onto my lips (with lipstick base) and then I'll have naturally red lips! Super lazy, I know. 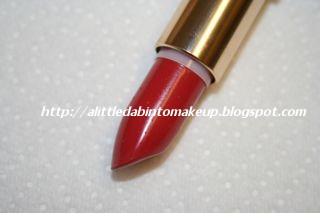