I forgot to post a review for this Revue Essence in Moisture Liquid Foundation for, like, 2 years -.- Woops. That's what happens when you start a draft post and then...forget about it...

Anyway, there was a lot of hype when this liquid foundation first came out (late 2007?). It did well in rankings and reviews in most major forums in Japan, and seeing that there was the word "moisture" in its name, I had to try it since my skin is dry, even though I don't ever really wear foundation. Curiosity kills the cat, they say, well, it didn't kill me in this instance, but the foundation was expensive ($30-35?). I bought in January of 2008 and only used it a few times before tossing it into the back of the cabinet. I felt very guilty for a long time, I tell you! So yes, the below review I wrote a loooong time ago while I was trying out the foundation but forgot to post. No worries though, the liquid foundation is still sold in stores, so it's not like the review is irrelevant now, even if it's old.

Here it is, the much-hyped liquid foundation! I don't wear foundation of any type, but I bought it anyway. I have the shade OC-B. When I was still in Japan, my girlie neighbor matched my skin tone with OC-A for a Kate foundation during a "makeover" session, but then I didn't see an OC-A for this liquid foundation so I bought OC-B instead, hoping it would work. Well, as you can in the swatch below, it sort of...didn't work :( OC-B looks just a tad darker and a bit too warm. Perhaps I should have bought Beige-B? Grr...it's so hard to buy a foundation, especially when you can't be there to try an get a match for your skin. 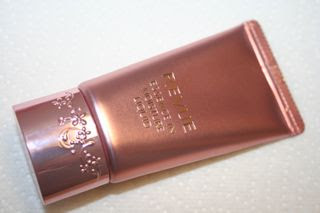 Anyway, blah, this foundation doesn't work too well for me. Even with my waterproof Sofina Perfect UV SPF50 PA+++, it melts like butter and after just an hour or so, my face is a shiny mirror. Yuck! The only good thing I see so far is right after application, it makes my face looks flawless, that is, until it turns all nasty and greasy. And it's January too! So cold and dry! Can't even imagine wearing in the heat and humidity of the summer. Urgh. May be I should try it a few more times skipping the sunscreen? 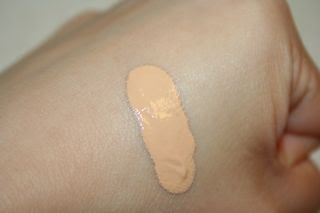 Email ThisBlogThis!Share to TwitterShare to FacebookShare to Pinterest
Labels: base makeup, Kanebo, Revue

Thanks for the review! It's too bad the foundation didn't last at all. I'd be curious how it works when you don't use sunscreen, but it doesn't really matter, since you should always wear sunscreen :P

Yep, no way I'm leaving my house without any sunscreen, unless it really really late at night :)

I don't wear foundation anyway. Do you?

I do wear foundation half of the time, but I'm usually too lazy to put on liquid/cream foundation. Powder's just much faster :)

Oh, I guess I do wear powder too, although translucent and only on the t-zones. too lazy for anything else :P