I figured all the sparklies in Makemania Sparkle Glitter Eye Shadow would be best to ring in the new year with ^.^ Plus I did promise to review them in the Kiss Kiss My Eyes Glamorize Shadow post. These are super duper sparkly eye shadows that can be worn as a sparkling top wash or by themselves. Totally my style xD They only come in 3 colors: SV - Silver, GD - Gold, and BR - Brown. These have been out since 2010, so not too long ago, but I don't see them in the stores anymore so I'm not sure if this means they have been discontinued and no longer available. 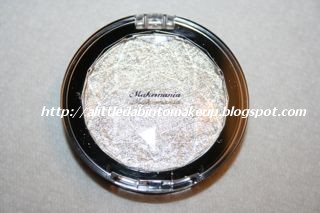 These Sparkle Glitter Eye Shadows certainly look frightening, don't they? Their name alone would probably scare off most people. But fear not, these are actually very lovely and I can't believe it took me this long to get to them! Despite the "glitter" in their name and appearance, their shimmer particles small enough to retain the softness of the eye shadows. Of course there is a tiny bit of grittiness in their texture, though this is because of the sheer amount of shimmers in them and not because of the chunky-sized glitters. There actually aren't any chunky glitters in these at all!
GD (Gold) 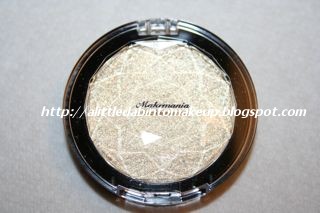 Secondly, unlike your average super sheer sparkling top washes, these babies are on the pigmented side. As mentioned above, they are pigmented enough to be worn by themselves as gorgeous super sparkly metallic eye shadows. These don't give a foiled effect, nor are they frosty. If I have to make a comparison, I'd say these are softer, smoother, and more pigmented than the vast majority of the sparkly top washes I have tried.
BR (Brown) 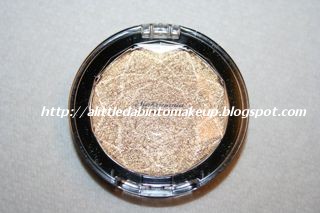 I don't wear them by themselves though ^.^' Instead, using the Sephora Crease brush I dab just a tiny bit of these Sparkle Glitter Eye Shadow, tap off the excess, and dust what's left on the brush as a finishing touch for the Kiss Kiss My Eyes Glamorized Shadow. When applied as a light dusting this way, they are translucent enough as a top wash and still enlivens the Kiss eye shadows since those aren't very shimmery and I need some sparkles xD Despite what you would expect, I haven't experienced any fall out with these at all. Perfecto!
- SV (Silver): metallic with high shimmers, medium intensity. Not a true silver but more of a whitish silver. The silver comes out a bit more when used alone as an eye shadow, but when dusted as a top wash, it's pretty much just white shimmers. 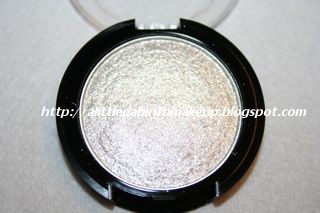 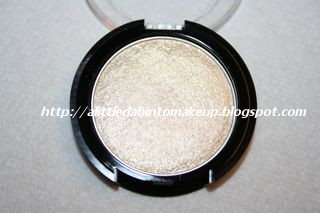 - BR (Brown): metallic with high shimmers, medium intensity. Not brown at all but rather a bronze with some copper, and the redness of which makes it rather warm. I tend to use the Silver and Gold more often than this one, but that doesn't mean I like it any less. Just that I tend to not wear warm eye shadows, that's all. 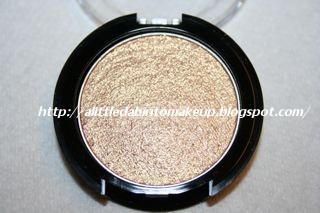 This swatch picture was taken in natural light without flash, and as such it really doesn't do these eye shadows any justice because you can't see their true pigmentation level as well as their full mother load shimmery prowess ^.^ You'll just have to trust me that these are really crazy f*ckin sparkly and are pigmented! No jokes. 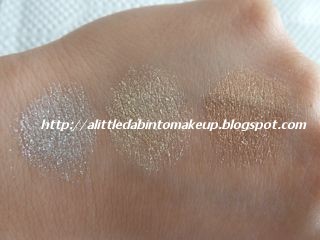 Photos can never capture the absolute "bling factor" of eyeshadows, but I can tell that those look very nice :)

That's the thing with no-flash photography. At least with flash it will catch a little bit of "bling" ^.^