Finally found a list of ingredients from Makeup Alley member ditto1973's review posted on July 9, 2004. This definitely confirms the Water Sleeping Pack a hydrator as there is not an oil ingredient in it!

My sister flew home from Japan to visit my parents, and since I haven't seen her since last December, I flew home too for a brief family reunion. And knowing how hot and dry it would be where my parents are, I packed myself a tiny jar of the Laneige Water Sleeping Pack. It was quite easy, I just had to scoop a bit out into a tiny reusable glass jar that used to hold my Avon Hydrofirming Eye Cream. At the time, I thought it might have been a bit unnecessary since I don't really follow the instructions and use the product the way it was intended anyway, but boy am I glad I brought some with me now. It literally saved my skin and I finally finally finally understand why folks are raving about it now! 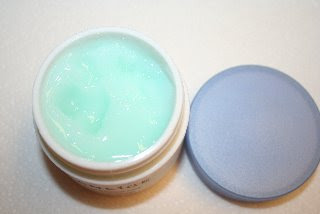 That's not all, I've figured out how to use it too (I think), which makes me super excited to come home and try this method with my other sleeping packs, including the Etude House Moistfull 3-in-1 Massage Mask! You see, after about 5 days at significantly higher elevation (about 5,300 feet above sea level) where it's super duper dry and ultraviolet radiation from the sun is much harsher (because there are less atmosphere here to block the rays), I started getting these odd red itchy bumps on my cheek - a clear indication of dehydrated and stressed out skin!

So what did I do but whooped out that nifty little glass jar and plopped some of this good Laneige Water Sleeping Pack stuff on my face? The thing is, when I was at home I would just wear it as a day mask when I'm lounging around doing nothing for several hours. Here, hubby and I are driving back and forth dividing our time between our families, we don't have several hours to lounge around doing nothing and I was actually forced to follow the instructions and use it as a, whoop-dee-doo, sleeping pack. Yes, overnight, with my face smashed into the pillow and everything. 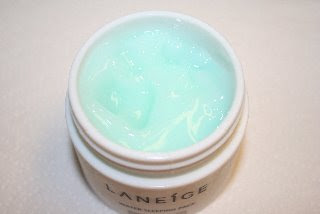 That said, I didn't goop on as much as the instructions said I should. After putting on my eye cream, I skipped moisturizer and used just this sleeping pack, applying it sparingly in light dabs as though it is an intense hydrator, a maximum-strength Clinique Moisture Surge Extended Thirst Relief so to speak. After all, it doesn't have any oil ingredients and I don't see why I can't use it as a hydrator :) And what do you know, it sank right into my skin without leaving any traces of stickiness behind! Best of all, after just 2 consecutive nights of use I woke up this morning to skin that has been restored to its original smooth and supple state! It was like those red and itchy bumps were never even there! Holy crap this stuff is freakin' awesome! I will never ever travel without it again!

And now that I've figured out how to get this Laneige Water Sleeping Pack to work with my skin, I'm beginning to think $30 for a jar of 80 mL (2.7 fl oz.) is worth every penny, not to mention soooooo much cheaper than its fellow hydrator, the Clinique Moisture Surge's $46/75 mL (2.5 fl. oz) or $34/50 mL (1.7 fl oz.). I said below I probably won't buy it again, but scrap that, this experience totally changed my mind and I already thought about getting a back up even though with my light dabs for each use, the jar will probably last me much much longer than just months and months. Yes, I love it that much.

I heard loads about this Laneige Water Sleeping Pack and how it restored people's skin from environmental dehydration (due to pollution, long flight, dry weather, ...stress?), so I just had to try it despite my aversion to sleeping packs (and I've already bought quite a few different ones prior to this...oi...how do I ever cure me of my curiosity?). It is supposedly very hydrating. I even checked the ingredients and didn't find any oil ingredients indeed! 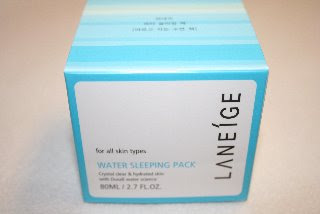 The sleeping pack comes in a pool-blue gel-cream (will update with a picture of the actual gel-cream later). It is scented with a brisk springy water/soapy fragrance, quite perfumy, unfortunately. I honestly don't know what the heck I was expecting, because it was sticky as f*ck! The first few times, I tried using the recommended dime-sized amount. I waited and waited for it to dry up but nope, it felt like I had applied syrup on my face. Then I thought, what the hell, and I gooped a bunch on my face the next few times. Let's just say the syrup upgraded to honey, ick. And then for the past several times, I used, like, a pea-size amount, which dried a bit more decently but was still a bit sticky for me to go to bed with. So every time, I ended up washing it off after a few hours before going to bed. Oh well, I'll use this as another day/evening pack just like the Etude House Moistfull Massage Mask. Doesn't hurt my feelings :) 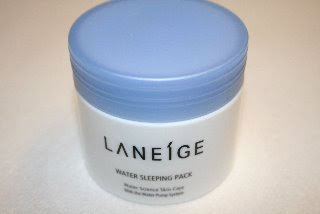 With all that said though, the thing really does what it claims. My skin felt nicely hydrated and SUPER SOFT after washing it off, yep, in this hot and already humid weather, so I would imagine my skin will only feel better if I were to use it during the dry and cold winter months. And as usual, I store the jar in the fridge in my "skin care" section :D Upon application, it was like, "Ahh...relief..." I probably won't buy this again though as the jar is big enough to last me probably months and months. If anything, I'm going to try the newer and better version of this pack, the Water Sleeping Pack Plus. Apparently this "plus" version has less ingredients and not sticky at all! Sold!
Posted by D. at Friday, March 05, 2010

I'm not even sure how I stumbled upon your blog but I'm glad I did, - it's so hard to find good reviews (and especially ingredient lists) for asian products in english, so thank you! :)

You are very welcome! I got really lucky with a lot of the ingredients list actually, so I don't want to take the credit for them. That said, I'm very glad you found my reviews helpful :)

Thank you for reading!

Hi, I live in Europe and looking for a place to buy the water sleeping pack; can you help? or can I buy it online?

Also, have you tried searching on Ebay? Many Ebay sellers will also ship worldwide, with the exception of certain European countries.

I hope this helps.

I just bought this product and stumbled upon your blog. i noticed you used the product for consecutive days, and i was wondering if you think that is safe, seeing as though it says to use it once a week. also do you still use it daily?
Thanks for your input

Actually, I don't use Laneige Sleeping Pack every night. I use it every 3rd night, so at most I use it twice a week skipping 2 nights in between. Even if I were to use this product every night, I still wouldn't be in a position to tell you whether it would be safe. What works for my skin might not work for yours.

Why don't you start out using it once a week as the packaging instructs, then if you feel your skin is ready for a 2nd session in the same week, try it then?

I hope this helps.

I suppose so, since it is among the ingredients list. The ingredients listed is for the very first Water Sleeping Pack, which Laneige doesn't make anymore and anything available online is via Ebay or other sellers, which means they may be old stock.

The most current formulation is the Sleeping Pack EX, which doesn't have straight up Ammonium but instead Ammonium acryloydimethil taurate/VP copolymer, a gelling agent commonly used in cosmetics and skincare (source - http://truthinaging.com/ingredients/ammonium-acryloyldimethyltaurate).

If you are iffy about using a product with Ammonium in it, you might want to take a look at this newest formulation instead.

I hope this helps.
D.