A reader, Ann, wanted to clarify whether these pearls are truly colorless, so I have posted a swatch photo, which I should have done to begin with ^.^ By the way, from playing with these pearls, I learned they are buttery and silky to the touch!

The pearls are of 3 colors (left to right): peachy pink (less than 20%), pearly shell pink (about 40%), and pearly gold (about 40%). To get each swatch, I literally picked one out and rubbed it many times to get a color to show up. Only the peach pink would work as a blush, and that's if you were to apply the same way I swatched, as in picking that specific color out and rub it heavily onto your cheek xD Technically, you can separate the peachy pink pearls and use a blush brush to pick up the color as blush. Otherwise, given the percentage of the color distribution and the disperse of a stippling or highlighting brush, there will only a brightening veil of warmth (due to the peach pink and gold). 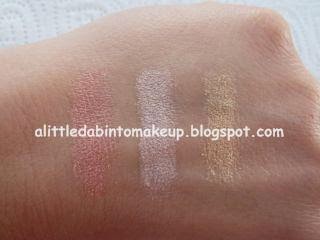 Picked up this Body Shop Lily Cole Puff On Radiance at the same time as the sheer and bulky Lip & Cheek Domes and have been using this powder since. It's in a giant ball jar with a flat base, which makes it both bulky and difficult to store, but thankfully the powder itself is quite nice ^.^ 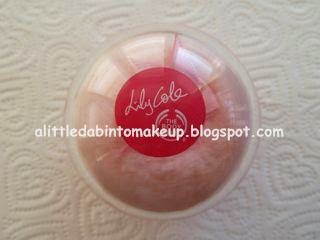 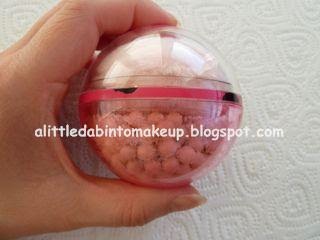 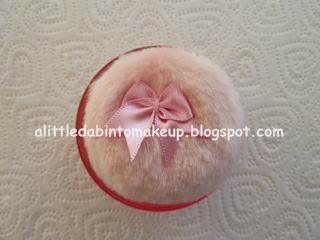 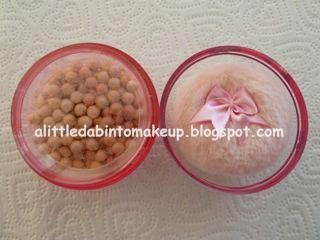 There are a good amount of products but the pearls themselves are small, like the standard size on a pearl necklace. I've been using Lancome's crappy Highlighting Brush #3 (not yet reviewed, probably never will...) with it for the past two years, and whenever I whirl the brush over the pearls I'd have to be super careful because the pearls are small enough to get stuck in the gaps between the brush's dual fibers.

Aside from the packaging and the size of the pearls, I like the powder a lot. It's unscented, and it imparts just enough to give a glow without any obvious shimmers. Despite the overall golden pinky peach this is a highlighter and there's absolutely no color in it. It adds brightening warmth and that's it, but this warmth makes a huge difference on cloudy days that make me look ashy and ill. Given the size and amount of product, I probably won't ever finish it, so it'll be an ornament with mini pearly marbles on my table for a long long time. 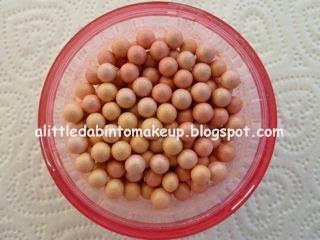 It look pretty!!! Are you sure the color didn't show up? I have very very (like nw 5) fair skin and everything with orange/brown (even if it is a little bit) will show on my skin what skin tone are you? Do you think it can suit me?

So I went back and did a swatch for this powder, just for you ^.^ I'll post the pictures with explanations soon.

Check back in a couple of days!

I will check in a few days then :)

My city doesn't have body shop but next month I'm going to travel to a city that have it , so this little pearls are going to be mine!!! :D

And if my skin decided to show the colors there are always my sisters who can use them.

Thank you again! You are really kind :)

You're so welcome! I hope you will like these pearls.

And my philosophy is the same too, my mum and sister always have a good stock of skincare and cosmetics ^.^