I'd mentioned that my queue for cleansing oils was down to a couple of bottles and that it was time to restock. What I didn't say was that I went a bit nutty and bought about two dozen bottles (oils) and jars (balms), so I think I'm set for the next few years ^.^"

This time around, I picked mostly US drugstore and Korean brands and went with only a few Japanese ones. Among the new items were these 150mL/5fl. oz. The Face Shop Rice Water Bright Cleansing Oil in two formulas, Light (left bottle, pink font) and Rich (right bottle, dark red font). I'm reviewing the Rich one today. 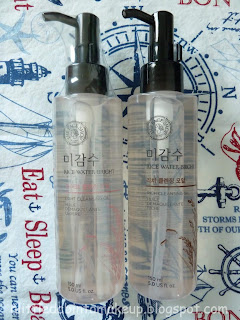 I remember browsing the Walgreens store on the corner of Bush and Fillmore in San Francisco one afternoon in early 2013. Hubby and I had moved home from Taipei just weeks before, and this was a few years after the bb cream had made a big splash with Sephora and K-beauty products had started to inundate the US market. There I was, delighted to have found some cleansing oils on the shelves of Walgreens.

Next thing I knew, brands like The Body Shop and Lancome were offering cleansing oils in all sorts of formulations: straight up oil, gel-to-oil, cream-to-oil, balm-to-oil, etc. I didn't buy the cleansing oils I saw at that Walgreens that day. I'd just lugged home a dozen bottles from Taipei after all. By the time I went through the Taipei supply, hubby and I were in Tokyo again and of course I hoarded some more. And now that I'm almost through with the Tokyo supply also, my excitement just ran amok to see that the cleansing oil and its kins are readily available at every price point. 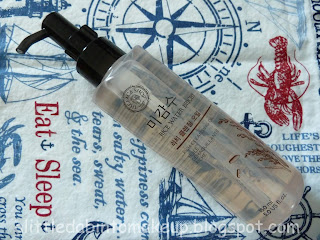 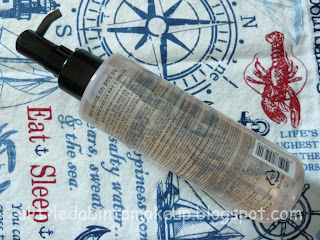 But I digress. This Face Shop Rice Water Bright bottle jumped my remaining queue of Astalift and Maihada (a relatively new Kose brand). Actually, the L'Occitane Immortelle did too, and for the same reason: they were both leaking. And this queue-jumping won't stop anytime soon either, because the Light version as well as three others from Nature Republic were all leaking. What gives?! Sure, I can excuse the crappy and unsealed L'Occitane sample bottle, but both The Face Shop bottles leaked inside their manufacturer shrink-wrap and all three Nature Republic bottles leaked inside their outer boxes, this despite each arrived well-wrapped and in perfect condition. What the hell's going on?

Talk about mind-boggling! Folks, I've been using cleansing oils for 12+ years and have never had a single leaking incident with a new and unopened bottle. And I've subjected my supply to out-of-state and international moves too! Do The Face Shop and Nature Republic just make shitty pump bottles or what? How else do I explain five out of nine Korean cleansing oil bottles leaking inside their pristine packaging? Either way, I stopped buying Korean cleansing oils and only bought Korean cleansing balms after that :P 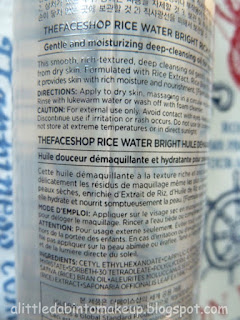 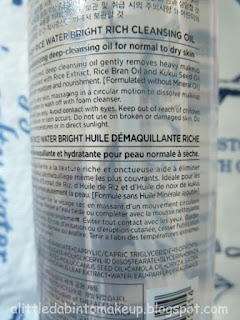 Anyway, onward to the actual cleansing oil. Aside from the leaking, it's not bad. That said, being "rich" but it's rather thin and super runny, possibly one of the runniest cleansing oils I've used thus far. It's like holding water. I pump some into the palm of my hands and by the time my hand reaches my face, I've already lost half of it! It doesn't rinse quite clean and does leave a slippery silicone-y layer on my skin that bugs me a little bit but isn't anything unbearable. I've had worse and plus the follow up cleanser gets rid of that slipperiness so it's not a big deal. What I unexpectedly enjoy about this cleansing oil is the fragrance, a lovely creamy-powdery scent with a whiff of fresh-cooked rice. I won't repurchase because I don't want another leaky unopened bottle, but I'm glad to be using it now.
Posted by D. at Saturday, December 08, 2018