These are more generous presents from Yuki-chan! Thank you!
Similar to the Canmake Cheek Gradation, these Highlight Gradations are in a clear rectangular case with a small brush. They also have the 4 horizontal blocks each has a different shade. I have both the shades available:

- 01 White: this shade is designed to cut the red, or so I think. My face often gets red in the heat of the summer, so this is supposed to be a nice little highlighter that will tone my lobster scale down. It looks all white, but all 4 blocks actually have different shades. The top block has blue iridescent shimmers, 2nd from the top has green iridescent shimmers, 3rd from the top has gold shimmers, and the bottommost just has white shimmers. 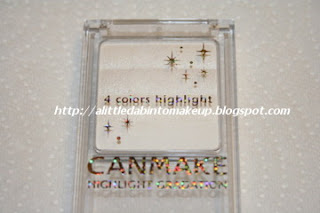 I'm sad to report, however, that this highlighter doesn't really work. First off, it's waaaay too dusty. When I swirl my brush and shake off the excess, it looks as though I've been playing with flour! It did brightened my face a littie, but by the end of the night, it also settled, magnifying all my pores and lines...Ack!! 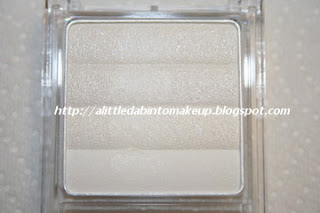 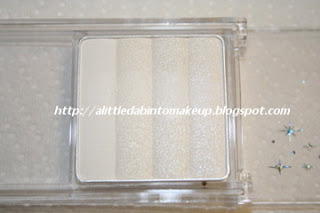 Just thought you'll be able to tell between the gold, green, and blue iridescent shimmers with this picture.

- 02 Pink: this one is supposedly for my ghost face days when I'm paler than death. Again, although it's hard to tell with my picture, but the blocks are actual gradation of pinks. Also, this pink highlighter is a bit more shimmery than the white, so I guess they were also aiming for nightly usage? 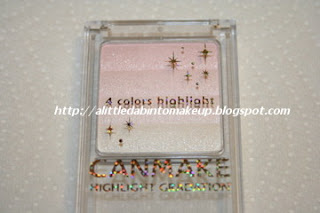 Anyhow, this powder also didn't work so well with all the same faulty points as the White Highlight Gradation above, unfortunately. Actually, this one was worse! I barely noticed any difference with it on! I need to try using both of these highlighters again in the summer, but these are just not the best fall/winter highlighters in my opinion :( 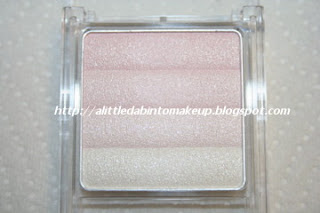