Bought this Asience Shine Therapy Shampoo after having had a good experience with the Nature Smooth kind in the silver bottle. This was the day after our arrival into Taipei late at night and so I wasn't paying much attention to what I was buying. So despite having Japanese on the front of the bottle, this is actually a localized product, made in Thailand, and not a Japanese import, which I have noted with a "TW". Again, this is not a comment on the quality of the product, but if you were to buy the Japanese made one, be aware that it may or may not perform the same way this one does. 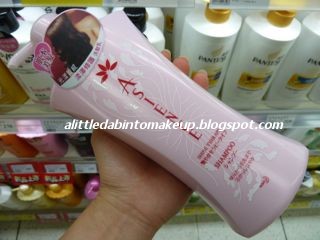 This shampoo is just okay. I don't like it more than the Nature Smooth, but I don't hate it either. They both have the same scent, and I can't tell at all whether it makes my hair any shinier. What I do know is that my hair seems to be more oily the next when I use this shampoo, then again it may very well be the fact that it's more humid here and I sweat buckets load with my walk to and from school every day.

The funny thing is, after just a few days of using this I went out and bought another bottle of Tsubaki Shining Shampoo, which made hubby wondered out loud whether we can finish both bottles of shampoo within the few months we're here. I guess that means I actually miss the Tsubaki shampoo ^.^ Moving out of Japan, we handed over our apartment in its entirety, including all furniture and whatever shampoo and washes we haven't used up in the bathroom, to hubby's kohai who came to Japan on the same fellowship he did. And we had only used up less than half of our bottle of Tsubaki at the time (a bottle usually lasts the both of us about half a year!), so I still haven't had enough of it yet ^.^
Posted by D. at Tuesday, October 02, 2012