My recent obsession with Coffret D'Or Premium Stay Rouge has nudged my curiosity towards Maquillage Dramatic Rouge. I've mostly resisted, because the formula didn't impress me when I swatched them and I don't like the packaging. But some colors did catch my eyes, and so I picked up PK433 Pink Joker and limited edition RD351 Red Fizz, both released fall 2015, and RD425 Innocent Glamour and limited edition RD454 Red Bloom, both released spring 2015. With the addition of the recently released #10 Lady Red from the 10th Anniversary Collection, these are probably some of the brightest and boldest in the line.

All pictures taken in natural light without flash. Clickable = zoomable. 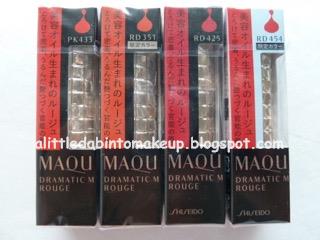 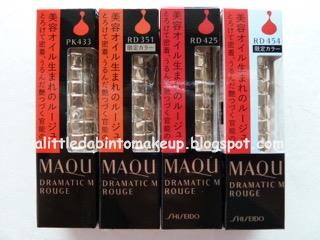 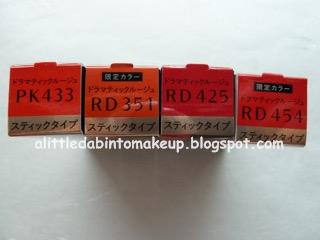 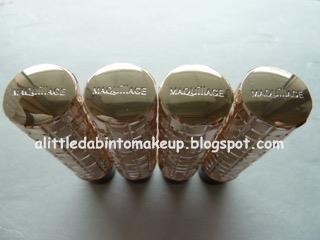 Let's talk about the packaging. I like the slim inner bullet tube, but I think the faux-sequin cap is gaudy and ugly. First off, they're plastic and they look and feel like it. Sure, Coffret D'Or makes shiny plastic lipstick packaging too that's unfortunately growing in size. The difference here is that they don't look or feel plastic. Whereas Maquillage makes these faux-sequin cap with an uneven surface, which I guess is supposed to be interesting but turned out to be just lumpy. And because it's lumpy, it doesn't store well next to each other or to other lipsticks. 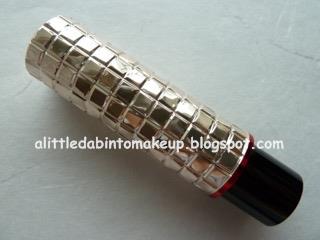 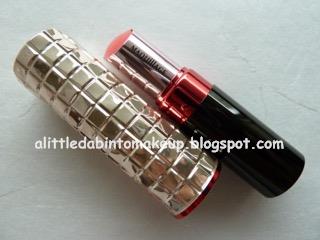 My humble opinion is that the formula tries so hard but ultimately doesn't win me over. These lipsticks are unscented and supposedly contain rose oil and other beauty oils. But the result is that they're quite oily, and not in a good way. From an oil-based lip balm like Victoria's Secret Beauty Rush Soothing Lip Balm (which has made a comeback by the way, and you bet I stocked up), I'd expect a cushiony, thick, and smooth texture. Instead, I get thin, silicone slick-n-slip. In short, they literally feel like a thin film of silicone-oil on my lips. Not a good feeling, not for me at least. This surprises me, as I've read glowing reviews of these lipsticks.

Despite having all those oils in their ingredients, I don't find them moisturizing :( They may feel oily going on, but after an hour or two my lips wither up all the same. You know what the worst part is? They cost 3,000yen a piece before tax, the same price as Lunasol! This pisses me off, because I can tell you right here and now Lunasol makes a better lipstick than Maquillage. My love Coffret D'Or Premium Stay Rouge is 2,500yen a piece, and I often can find it on Rakuten JP for around 2,000yen! See why Maquillage is losing this battle? 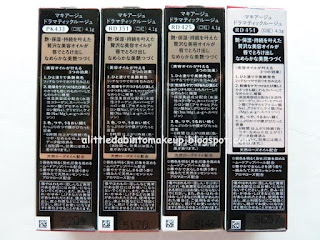 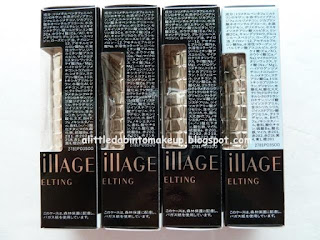 But I'll be fair: there are some pros to these lipsticks too. Their finish is glossy and totally translucent but build-able, which you know I appreciate. There are colors with shimmers, but the shimmers are so fine they don't show at all. Pigmentation is on par with Coffret D'Or, so no complaints here either. Color selection is decent, mostly my-lip-but-better colors that are safe to wear but with a few gems here and there if you care to look.

Honestly though, I feel the cons far out-weight the pros. Some folks out there buy lipsticks for the color, but for me the texture and the wear come first. And if I ever wanted to spend more money for a lipstick, there are plenty of other choices with much better texture and wear than these. 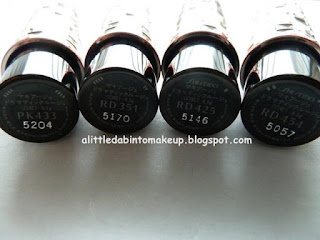 - PK433 Pink Joker: vibrant coral with gold shimmers that are visible in the tube but apply more of a gold sheen. 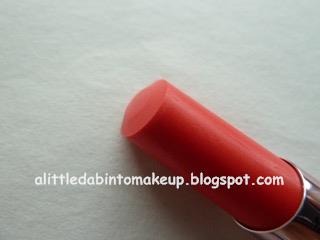 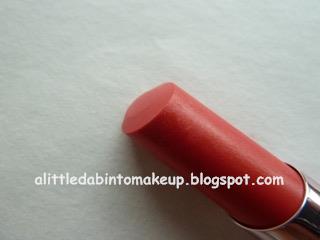 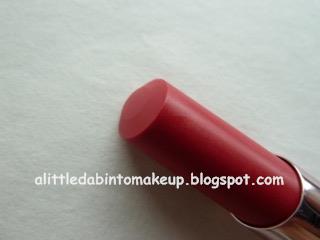 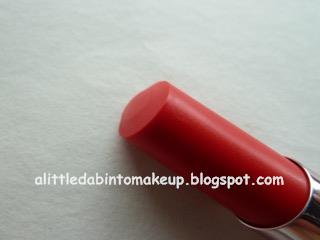 See how the oil bleeds at around the edge of the swatches? Thankfully, they don't bleed on my lips. Also, see how the colors didn't swatch evenly and instead migrate towards the top of the swatch? Funny enough they also apply more evenly on my lips. 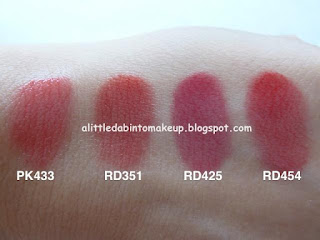 Of course I have to compare these with my Coffret D'Or loves ^.^ 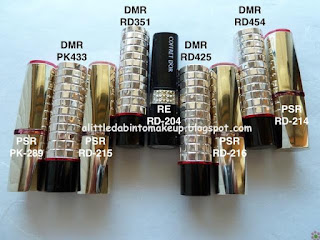 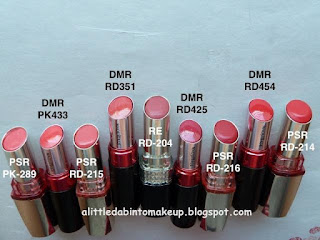 Against Premium Stay Rouge PK-289 and RD-215, PK433 is peachier, probably because of the gold sheen. 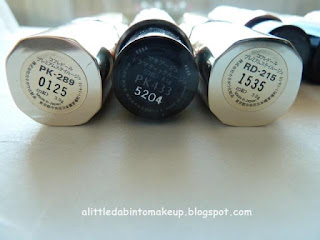 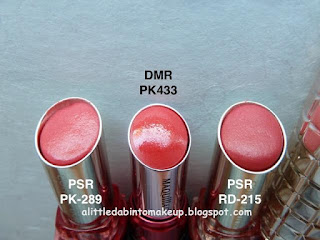 Interestingly enough, Rouge Essence RD-204 appears a much cooler red next to the orangey red RD351. 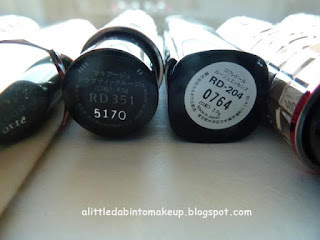 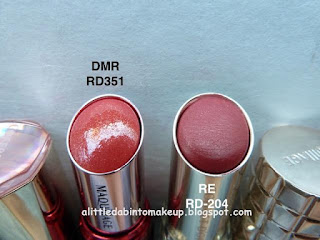 RD425 look almost berry in the tube, but as it happens Premium Stay Rouge RD-216 is the cooler-toned and more pigmented! 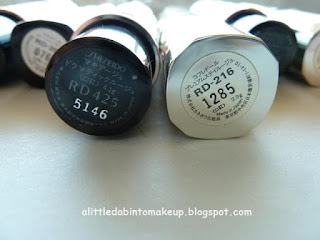 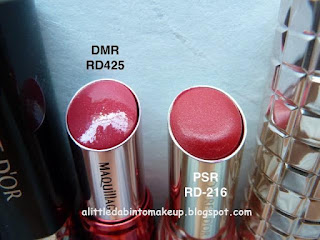 This pair does a switcheroo on me too, with RD454 appearing cooler in the tube but swatched warmer, if not orangey against Premium Stay Rouge RD-214. 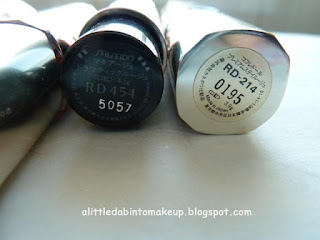 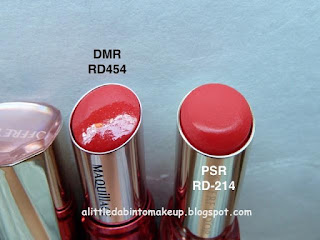 See how the Coffret D'Or lipsticks swatched a lot more evenly than the Maquillages? 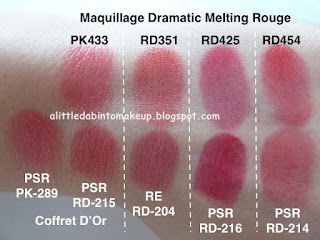 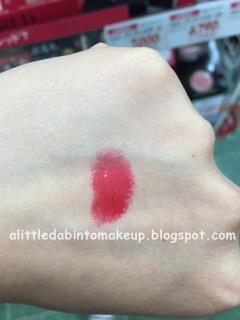 Glad to read your review. I was tempted by the lady red color but not enough to make the purchase.

I bought Lady Red, actually! Because I just love reds and will review it soon (spoiler: formula still sucks =.=). So that will be the last of these Dramatic Rouges for me, unless they come out with another striking red to temp me. I'd rather save my money for Coffret D'Or!

Oh, I actually love the maquillage gaudy plastic tube (i guess I love I t when they overkill)but I guess I will skip it and go for lunasol when I gather enough things to rakuten... What do you think about Lunasol's sparkling eyes(for this spring)? For some reasons they look quite bland to me (and I hate that the eyeliner takes a whole pan for the duos)....

This packaging actually looks a lot better in photos than it does in real life. I didn't mind it at all looking at the online photos until I saw the store displays and played with them. And yes, my Lunasol lipstick definitely feels so much better on my lips than these.

As for the Lunasol Sparkling Eyes, I actually swatched them and am writing the swatch post as we speak ^.^ You're psychic! Will post either tomorrow or Monday so stay tuned!