Funny how I started out poo-pooing these Maquillage Dramatic Melting Rouge, only to have that same oily formula grow on me over the past two years. So now I can just sit back and pick from the new colors they release each season, this is great! ...Not. They just released the Dramatic Rouge P last November, which probably means the original line will get discontinued sooner or later. Urgh. So I went ahead and picked up several more colors before they're gone for good. Here are the first three: RD324 Red Velvet, RD533 Vintage Red, and RS547 Grace Rose. 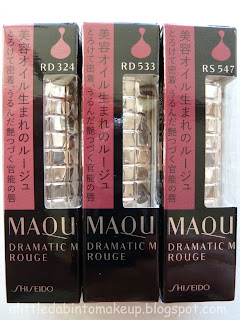 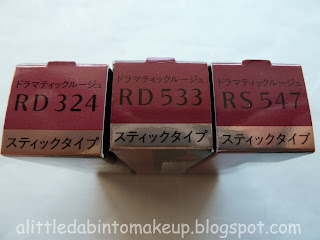 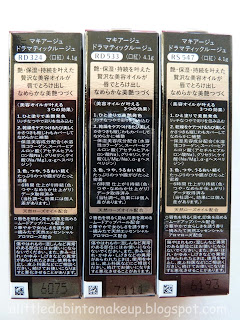 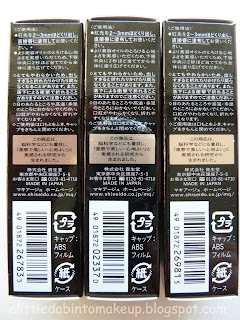 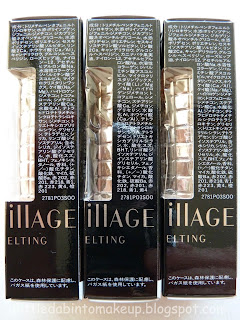 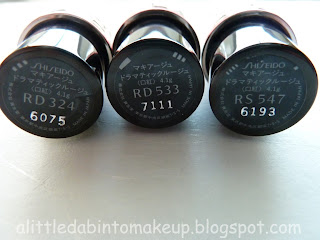 Let's talk about the new Dramatic Rouge P for a moment. I don't love the original line's packaging and I dislike like the new packaging even more. It's shorter and chubbier just like the Dual Color Rouge (most probably discontinued, by the way, as I don't see it on Maquillage's official website anymore), only with a black base. 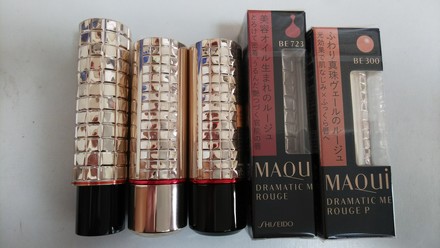 ***Photo courtesy of this cosme.net review.

From what I've seen of the Dramatic Rouge P swatches online, they seem to be mostly opaque and a lot more pigmented, which probably means Maquillage might have changed the formula also. Then again, online swatches are notoriously unreliable, so in the end I can only stick to what I know and like--the original stuff.

When I first looked at the swatch photo I took of these three colors, I thought I'd gone color-blind. I could barely distinguish between them! It was a clear, sunny day so I blamed the blue wash and waited to retake the swatches on a different day. And yet despite the warmer light, the colors still look so similar. Ha.


- RD324 Red Velvet: opaque and warm rosy red with white and gold shimmers. The opacity is a clear departure from the rest of the colors in my collection so I'm less happy about this color. Contemplating passing it on. 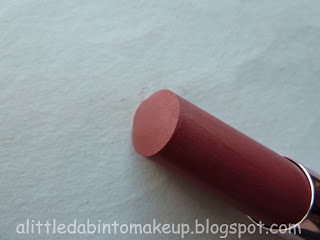 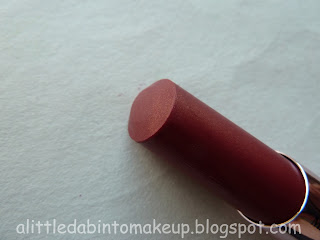 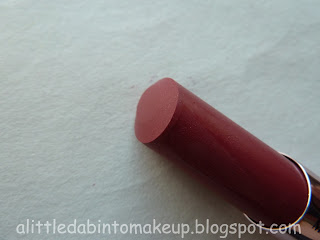 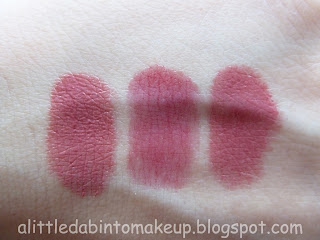 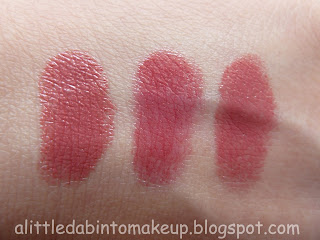 This is what you happen when you have a type lol. But those colors are right up my alley as well, and I do opaque too, so that wouldn't bother me. (I often wear bright red as well - I'm super pale, so my face needs some color. Plus it makes me less depressed in bad weather.)

These do look good, but the packaging is so tacky. I think Maquillage makes great lipsticks (as does Coffret d'Or), but I hate these tubes. For my semester reward, I might just spring for Jill Stuart again or get my first Suqqu.

But thanks for the swatches! How are you?

I'm well. Super busy these days because we're moving (yet yet again, though only to a nearby suburb this time =.=), but otherwise well. How are you?

I know. I hate the packaging too. Over two years and the formula grew on me. But the packaging, not so much. Let's hope the other colors I bought aren't so similar looking.

I would totally recommend Suqqu but I don't love that new packaging either. At least it's just big and bulky and not as tacky as these ^.^"

Oh, moving is really stressful! I hope it goes well and ends soon.
I'm mostly good, but my thesis is stressing me out, and I need to find a job for after grad school, which is hard because my husband needs to be able to work in the same city...

I'll try to go to the Suqqu counter while I'm still in Tokyo and try one of their lipsticks. If I actually graduate, a I deserve a giant reward!

My husband and I went through the same thing when he was finishing his grad school. He was stressed out about finding a job and where, because I'd have to be able to work there also. It's tough, so hang in there. I hope things will work out well for you and your husband. がんばってね! Let me know when you graduate. Best of luck to you!

And yes, try that Suqqu lipstick when you have a chance!

Thank you! It's so good to hear this from a sempai :)

If I actually graduate this summer, I'll be buying all the things I want to take with me from Japan. I already gave my mother a huge bag of duty-free (she was a tourist, so I made her buy it lol) mascara and sunscreen to take home to Germany for me. X'D

Why not make good use of those tourist discounts, right? :D

I think Rakuten ships internationally now also, though I've never tried so I don't know how well it works. My husband has been buying books from Amazon Japan and paid less to have them sent to us than if he were to buy from Kinokuniya USA! Finally, if you really love Suqqu (or Cosme Decorte aka Decorte, RMK, Paul & Joe, etc.), consider Selfridges UK+ Global (or something like that), where you pay GBP40 for a whole year of free worldwide express delivery!

Best of luck and let me know when you graduate!

I think I ordered from Rakuten before, but skincare. I need to see lipsticks before I buy them, especially in this price range! So I think this Suqqu will be my only one until I go back to Japan to visit people. But thanks for the Selfridges tip, maybe some day when we're rich lol. Although I have drastically reduced my make-up spending these days in favor of eating out with friends, buying books, meditation apps etc. - and I also want to take singing lessons once we're settled in, to fulfill a life-long dream of mine.

That's true about the lipsticks. I'm buying blind and good thing my family and friends are always eager to take things off of my hands. In fact, if you don't mind the lipstick has been swatched and sampled, would you like to try this Dramatic Rouge in the color RD324 Red Velvet--it's the opaque one, since you say you do opaque? I'd be happy to sanitize and send it to you in Tokyo. Spell out your email address for me and I'll be in touch.

By the way, I'm curious to know too what your "type(s)" (of colors) is when it comes to lipsticks :P

You know what's interesting, Suqqu is actually more affordable through Selfridges UK than if you were to purchase domestically in Japan. For some reason, it's priced lower than the Japanese retail and is reduced further still when you buy internationally without VAT *wink*wink*

I'm so sorry, I didn't mean to just leave you hanging! I posted a reply on my school laptop and I guess something went wrong there. >.<

I do go to karaoke quite often in Japan, often just with my best friend to sing for hours, but I need better technique to fulfill my dream of being in a real musical at least once.

Thank you very much for your offer! If there is anything I could send you from Japn (or Germany, if you can wait a little) in return, I would gladly accept.
My email adress is julia.kaczmarczyckATgooglemail.com (Germany only got gmail years after I got this lol)

Types of colors I like...? I guess neutral reds and berries and maybe some pink and not too warm coral for summer. I definitely do opaque colors, but not exclusively. What I can't do is too pale or too much of a white base, as well as either warm or really cool colors. It seems like we're not so far apart here?

If I ever see myself becoming a regular Suqqu customer (I wish), I'll keep that in mind, thank you! For now, I want to go swatch and buy in Tokyo as soon as I finish my stupid thesis ;_;

It's quite alright to say no to me, or to stay silent and not answer, but I'm glad you said yes ^.^