My hair washing routine always include a clarifying/deep cleansing shampoo twice a week even though I don't use any styling products. I have an oily scalp, you see, and my hair gets greasy easily so I have to use clarifying/deep cleansing shampoo regularly to keep my scalp clean and my hair roots clear from oil build up.
Usually, I just pick whatever that's on sale or cheapest, like Suave Daily Clarifying Shampoo, but of course since that's not available here, I'd have to find something else.

***Picture from Suave.com.
And you wouldn't guessed it, but finding something is rather challenging. Out of the gazillion choices of shampoos at the drug store, all were for moisturizing, damage repair, shiny, or smoothing. There were several other shampoos for color protection, but I actually found very few clarifying/deep cleansing shampoos! That's odd. May be I'm missing something. Anyway, out of the couple choices I had for clarifying shampoo, this Sunstar Tonic Shampoo looks most promising, so I grabbed it. And actually, there are 2 different colored bottles, green and blue, and I tried the green first. 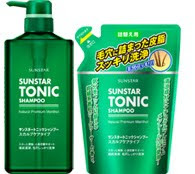 ***Picture from Sunstar Tonic.
I'm not sure why it's called "Tonic" Shampoo, perhaps because of the menthol? Either way, it's supposed to make your scalp tingly and the scent is supposed to be energizing. Well, let's just say it delivers, and then some. Holy crap this stuff is strong!!! The clear shampoo looks innocent enough, but the first time I washed my hair with it, I had to hurry and rinse it off because the tingly sensation quickly turned into burning sensation.
Over time, I guess I've gotten used to it and the strong tingly sensation is actually feels really nice. After rinsing, my hair feels super clean and my sinus is cleared! Two birds with one stone, haha! And surprisingly, this tonic shampoo works better for hubby's hair than mine, as it makes his hair super soft for days after too! He liked it so much that for a week or two, he kept using it every other day instead of twice a week and I had to remind him he doesn't want to strip his scalp too much. I guess this means we'll have to go back and try the blue color bottle as well :)
Posted by D. at Sunday, October 10, 2010

I like that shampoo, the green pack.
The blue one is softer.
But after some use, it gives little effect so I use it im my face and body too.
I don't recommend it for use in the winter lol.

Thank you for your comment! I am trying the blue one next! Can't wait ^.^