After having had the most unbelievable Black Pork at Arisan last month, I was determined to learn how to make it myself. After all, it is the Chinese cousin of the Vietnamese Caramelized Pork (Thịt Kho, and I know the first link will take you to the Caramelized Tofu & Eggs recipe, but I also made a pork version). There's a Japanese cousin too, called Nihon ni Buta (日本煮豚), or Japanese Simmered Pork, which I've had at a Japanese get together but didn't like as much. 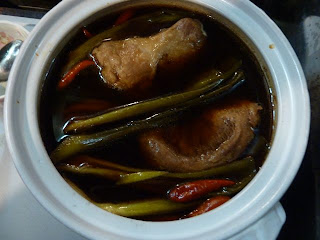 But oh heck, I tried making them both just for the hell of it. Citrine had kindly sent me a couple of Youtube links to cooking videos for the Chinese version called Dongpo Rou (東坡肉, see them here and here, both are in Mandarin), and hubby helped me dug out the Japanese Nihon ni Buta recipe from Cookpad. You can also see drool-worthy pictures of Dongpo Rou from Almost Bourdain, and the blog author also has much better pictures the Vietnamese Caramelized Pork too by the way! Since the recipe for Dongpo Rou is already aplenty from both the Youtube links as well as the blog link, I won't list again what I used. The Nihon ni Buta recipe is similar, only a whole lot simpler than Dongpo Rou ^.^
Also, now that you've seen marvelous pictures of this dish, you'll have to excuse my less-than-glistening photography :P
Yes, there were no fat in my Nihon ni Buta because I was too chicken to get the fattiest piece of pork belly. Hubby liked it, but we both wish it was more fatty. And the pork chunks were so big because they sort of just fell apart after being simmered for a few hours. 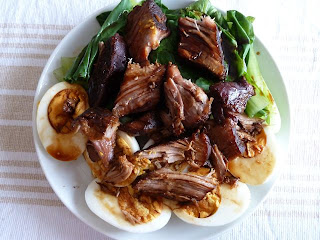 I served my Nihon ni Buta on a bed of steamed bokchoy and boiled eggs. 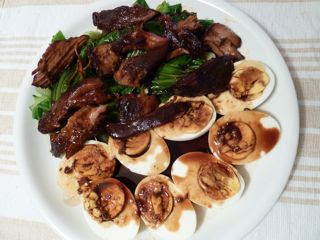 Preparation for Dongpo Rou, and I actually bought fatty pork belly this time too! Also, the pork cubes look red still because I only boiled it for a 1-2 minutes when it should have been 5. 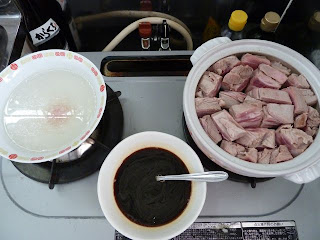 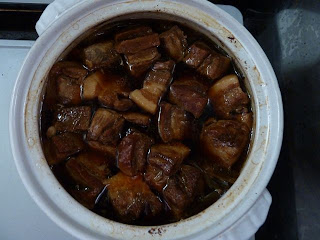 The final results, also served on a bed of steamed bokchoy and boiled eggs. I liked this version much, much, much better than my Nihon ni Buta version. I fed it to my sister who crashed for a weekend and she approved ^.^ 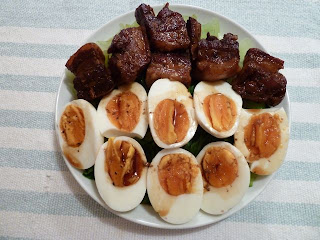