My friend M. who recommended Kiki's to us also recommended Ding Wang Spicy Hotpot (鼎旺麻辣鍋). She said whenever she visits in Taipei, this is the first meal she'd have with her friends and family the day she arrives.

But here's the funny story: there are actually two Ding Wang's! M. told me about a Ding Wang, with the name in Romanized letters instead of the Chinese name in characters. So I unwittingly googled "Ding Wang" and found a Ding Wang Spicy Hotpot (鼎旺麻辣鍋) with 2 locations and an official FB page. I called and made a reservation for a super early dinner at 5:30pm. 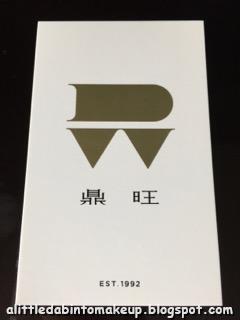 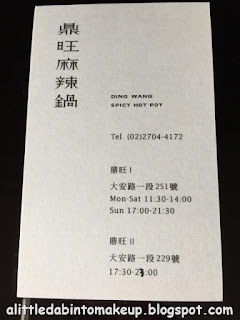 Then a short while later, trying to confirm their location I googled "Ding Wang" again, this time coming upon a second Ding Wang Spicy Hotpot (鼎王麻辣鍋) with 4 locations and an entirely different official FB page. See the difference in the characters there: 鼎旺 versus 鼎王, both romanized as and pronounced Ding Wang, and both are on this Foursquare top 15 Best Hotpot places in Taipei. How confusing is that?!?

Anyway, I'd already made a reservation with the former Ding Wang (鼎旺) and so we stuck by it. I thought of moving our reservation back an hour or so because we were still somewhat full from the big lunch at Shin Yeh, but in the end we decided to just go with it. Good thing too, because we came in at 5:30pm and the place was already hall full. By 6pm, it was packed and subsequent diners without prior reservations were turned away before our very eyes.

I did like our dinner even though it wasn't as spicy as I'd like. It wasn't the place's fault at all--hubby can't eat as spicy as I do is all, and so I had to go easy on him :P As you can see, all the ingredients were fresh and of superb quality. 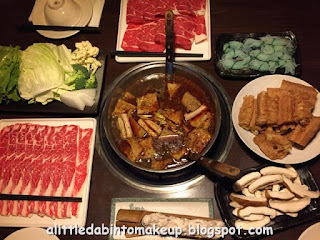 The service was great too I thought, and the people were really nice. M. recommended that I try their plum juice, and I made sure to ask for a bottle. But they'd just sold out of it, and one of the staff actually ran down the street to the second location to grab some for me. Wow! So I'd definitely go here again, although I'd be open to try the other Ding Wang (鼎王) as well to compare. 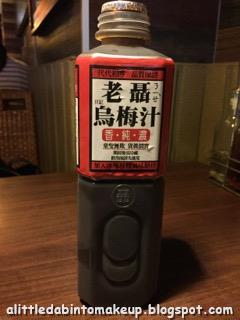