After a failed attempt to visit the National Palace Museum, we took J. to Ximending (西門町) for her to try Yu's Almond Tofu (于記杏仁豆腐). Yup, even a typhoon couldn't stop us from getting some delicious almond shaved ice and as you can see, we weren't the only ones there. 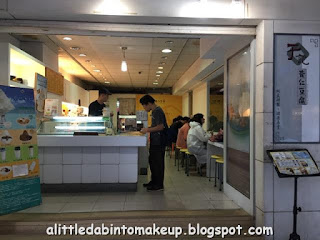 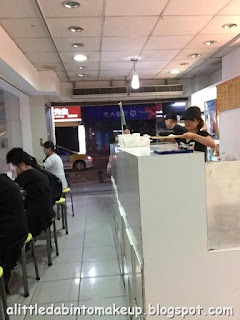 I ordered my favorite for J., the almond shaved ice with 4 toppings buried underneath. Hubby had the same thing on a different tray (unpictured), and I tried something new: almond tofu with warm almond milk (in the heated packet to be opened and poured into the lidded bow). Wow, it was just as good as I remembered. J. finished that whole big bowl of shaved ice all by herself! 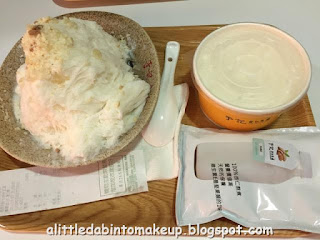 In fact, it was so good J. proposed we come back again the next night for an encore ^.^ This time, all three of us opted for the warm almond milk poured over 4 toppings of our choice. 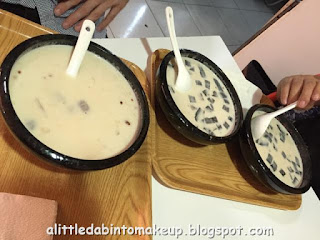 I liked mine with taro balls and other chewies and squishies, hubby liked his with extra grass jelly, and J. liked chopped fruits to go with her grass jelly and a few chewies. Will definitely, happily eat again and again and again. 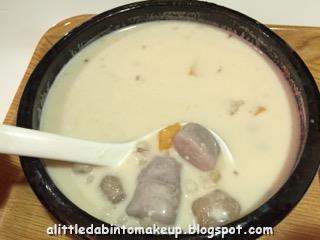 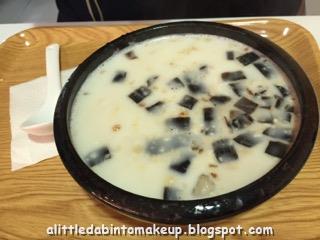 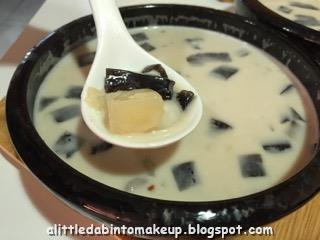 But back to the typhoon day. We decided to bear with the rain and explore Ximending a bit. Hubby wanted to visit a Sanmin (三民) Book Co. bookstore, and on the way there we walked by this cool building and Taiwan City God Temple (臺灣城皇廟), which I'll post about in a separate post. 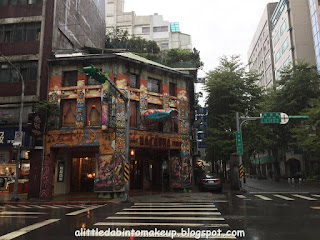 After the bookstore, it started raining harder and we found our way to Fong Da Coffee (蜂大咖啡) for a quick respite until the weather calms down again. Now, Fong Da isn't one of the "hip and modern" coffee shops ubiquitous around Taipei. It's been around since 1956, is hailed as one of the "originals," and it sure looked it. As in, it looked just like any good ol' Taiwanese store front and you wouldn't have known it had quite a reputation unless you look it up. 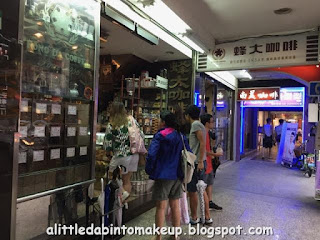 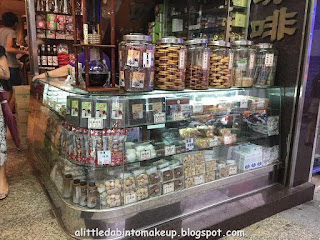 But boy oh boy they were serious about their coffee. Look at all these different types of beans and roasts. 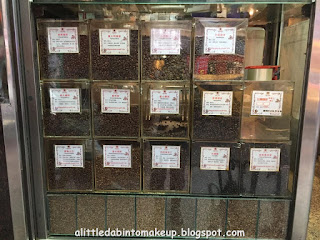 Inside, Fong Da looked a lot more like a mad scientist's lab than a coffee shop. Check out all these stockpiles and equipment! 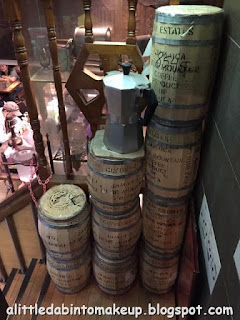 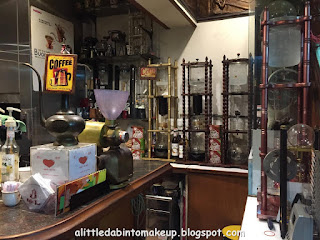 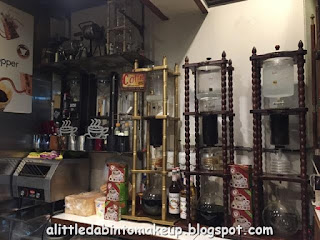 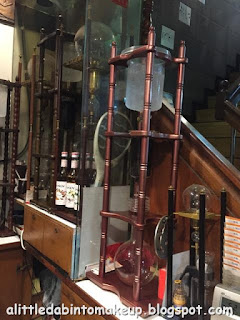 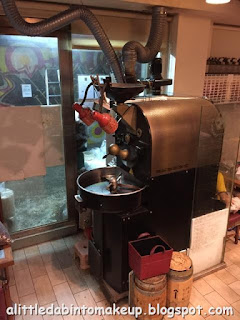 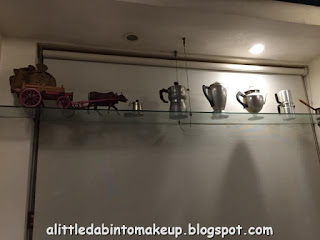 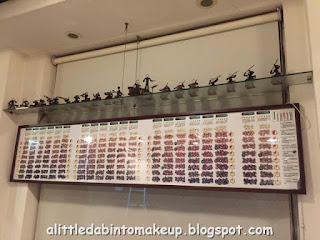 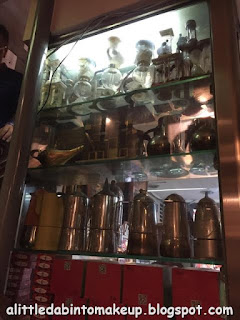 Other than coffee, Fong Da offered a host of other beverages, light meals (sandwiches), snacks, and desserts! 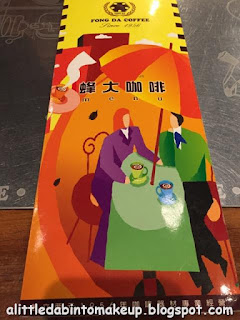 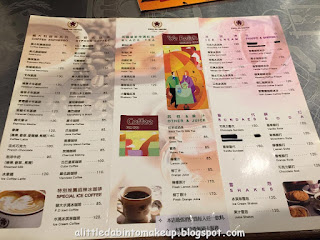 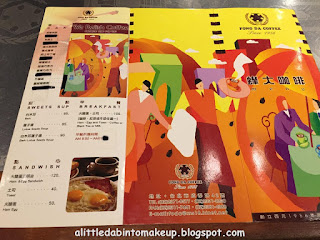 We weren't the only ones riding out the typhoon in a coffee shop, that's for sure! 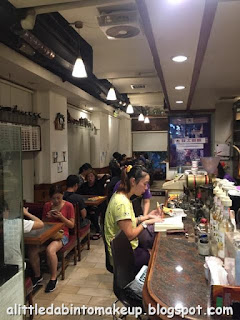 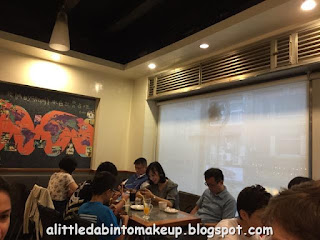 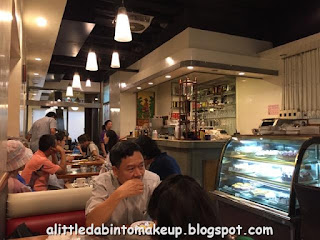 Their tabletops were steel. Neat huh? I'm not as big a coffee enthusiast as hubby and J. are so I let hubby pick my cup for me. I figured it'd end up being his anyway, might as well let him choose something else he'd like to try. I don't remember what he and J. ordered, and I'm not really qualified to pass any judgement on coffee either way. The spoiler is that all three cups got two thumbs up from them both, and we're talking about folks who are spoiled rotten with gourmet/artisan coffee like Blue Bottle (with two branches in Tokyo, which I'll post about later). Read more about Fong Da Coffee here, here, here, and here. 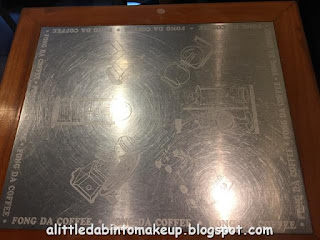 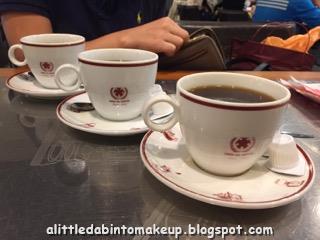 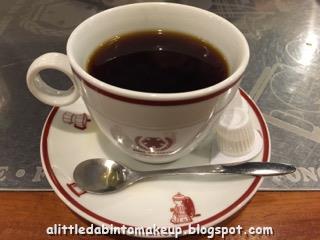 While hubby and J. sipped their coffee, I opted for something else more interesting to my taste buds: two Jizai Bing ("chicken biscuits," 雞仔餅) from one of the huge glass jars at the store front (photo above). Also known as Xiao Feng Bing (小鳳餅), these Cantonese cookies don't contain chicken but pork instead, and they are sweet and savory--think a Cantonese-style mooncake. I let hubby and J. try a bite and they both hated it. By all means it looked like a cookie so they expected a sweet cookie taste and got quite a surprise ^.^ I rather enjoyed it myself, having brought up on Vietnamese and Cantonese-style mooncakes. 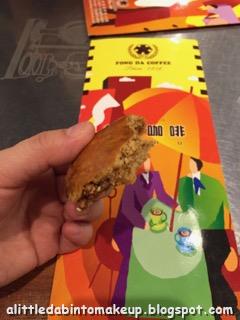 Leaving Fong Da Coffee, we spotted yet another interesting sight right across the street: Taipei Tianhou Temple (臺北天后宮). Will post these photos in a separate post also. In all, despite the typhoon the three of us had great fun wandering the Ximending area, unknowingly stumbling onto a few rather famous spots, namely this coffee shop and the two aforementioned temples. Good times, folks, good times.