Generally, Estee Lauder is kind of blah for me, nonetheless I check out their website every now and then to see what's going on. I do own several items from them, with my favorite being the Tender Blush in Peach Nuance, which is just absolutely beautiful to look at (just not so convenient to carry...). That said, the rest of their stuff is sorta just ho hum, which is why I seriously did a double take when I spotted this Vivid Garden Illuminating Powder. Wow. I was breathless. 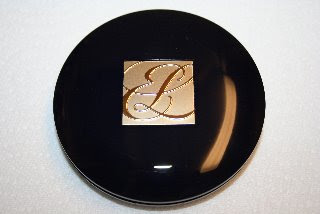 Aside from being packaged in a giant navy blue compact, very characteristic of Estee Lauder powders with the exception of their After Hours Compacts, this Vivid Garden highlighter is just a stunning creation. I'm sure there are fancier-looking stuff out there, but this powder's got that minimalist aesthetic thing going on, simple but oh-so-striking. It reminds me of the Japanese brands pulling out every trick in the book for their last hoorah of the year-end collection, only this was a spring collection. Needless to say, I started stalking my local Macy's to see when the item would arrive only to learn after a few months that they weren't going to get any in at all, because this Vivid Garden collection was released only in larger urban areas. Boo hoo hoo, but that didn't stop me :D I just had to drive another 45 minutes to the next huge mall and ended up grabbing the very last compact they had. Luckyyyy!!!! 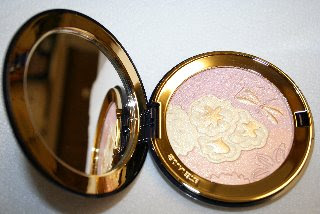 I brought this Vivid Garden Illuminating Powder with me to my short trip out of town. It was even more gorgeous in person. There was the lilac with shimmers so subtle it went on matte, same with the pastel pink. The ivory in the middle had more gold shimmers, but again the shimmers were so fine that it served only to brighten, not sparkle or even glisten. Yes, I know it looks a lot more sparkly in the picture, and that is because there was a layer of sprayed on gold shimmer that went away with the very first application. Unfortunately, the pretty gold flowers and the cute dragonfly at the bottom went away after the first use too. I really wish they weren't just sprayed on, the compact would have been even prettier. 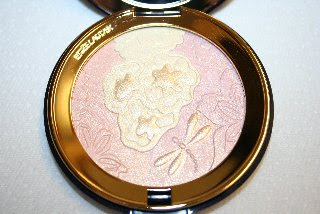 The powder itself was very light. It wasn't chalky, and was non-drying even in super dry weather, and didn't dust up a storm during application. Because of the subtle brightening effect, it made a perfect day highlighter for me. That said, if you are looking for a dewey glow, this won't be the product. Also, it was pretty much useless at night. Regardless, I'm very happy with it. It was worth it. I won't be buying another one though as the large compact will last me a long time.
Posted by D. at Wednesday, July 29, 2009