It was a quiet and otherwise slow Saturday afternoon for hubby and me when we started hearing drumming, then minutes later, folk singing. We blew it off, that was, until it went on, and on, all the way until dusk. By then, we were hearing kids squeaking, tween girls squealing, and tween boys shouting.

The center stage flanked with a large Taiko drum and adorned by pretty lanterns. 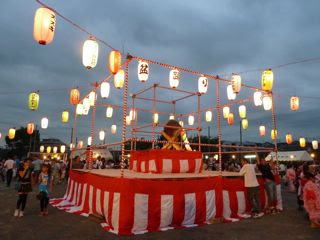 Turning to each other, we decided it might be best if hubby went out to scout. He did, and minutes later he returned with a beaming face. It was a festival at the park a couple of doors down the street. We looked at each other and wondered if the weekend was some kind of holiday. Turns out it was Obon, which usually mid August but different regions have their own time frame and for Tokyo and Yokohama, it was from mid July through this weekend! 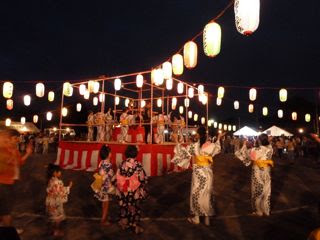 Hubby and I immediately threw on some clothes and ran over to the park to catch some nice folk dancing to Taiko drumming and crazy loud folk music. Of course there were food, but the food weren't sold by professional vendors per se. More like community groups volunteered to sell food to raise fund by setting a few stalls for yakitori, hotdogs, yakisoba, tea/beer/other drinks, and shaved ice. Even the dance troupe is from a community dance association volunteering for the event. 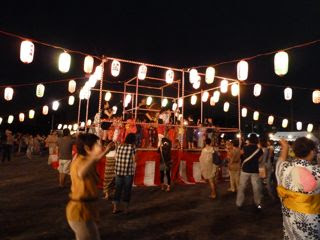 Because there were only a few food stalls and the turn out was huge - there were probably up to a thousand folks at one point - the lines for each stall was ridiculously long. That said, since we had entertainment, standing in line for food wasn't too bad. While waiting in line for yakitori, I took 2 videos, a longer video with hubby showing the 2 shaved ices we were munching on and a shorter video with some more fun folk dancing. At one point, they had all the little girls in their adorable yukatas on stage dancing around. It was so cute to watch! 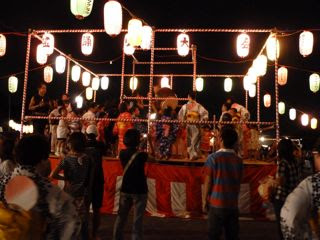 Of course there are much bigger festivals with fancy elaborate floats and carriages being parade about town, especially ones put together by the city/municipal area. That said, this itty bitty little get together (think massive picnic) put together by the neighborhood was a wonderful little surprise that spiced up our otherwise bland Saturday afternoon/evening. It's things like these that keep our life in Japan full of neat little adventures ^.^

Taiko drummers, 2 women, taking a break in between songs. 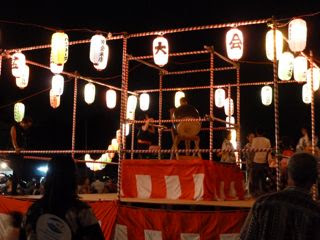