I finished up my bottle of Skilabo Cleansing Oil a few weeks ago and finally got to bust open the Hada-Labo Gokujyun (super hydrating) Olive Oil Cleansing bottle, which I was dying to try out! And plus my local drug store had a promotion where each bottle comes with a small deluxe sample tube of Gokujyun Hyaluronic Facial Cleansing Foam, so all the more incentive and I had to try this. 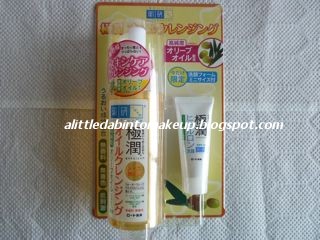 Turns out it was love at first use ^.^ I'm happy to say this cleansing oil has now replaced my trusty old favorite Softymo Deep Cleansing Oil to the best cleansing oil title! There are always better stuff out there, but as far as I'm concerned, this cleansing oil is excellent and more than suffice at the moment. 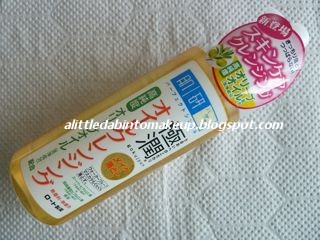 It's a given that it takes my makeup and sunscreen off, but it goes further in leaving my skin feeling clean and soft. It's not like the baby smooth effect that Skilabo Cleansing Oil gave but rather a freshly washed feeling. That said, unlike the Skilabo Cleansing Oil, it rinses completely clean, even better than all 3 Softymo Cleansing Oils I've used (Deep Cleansing Oil above, White Cleansing Oil, and Speedy Cleansing Oil)! I was worried since it rinsed so well it would be drying, but nope, so far so mild! Even after I had switched my follow up cleanser to the Pelican Deitanseki Clay & Charcoal Facial Cleansing Bar (will review soon), it's been two weeks of daily use now and I still haven't experienced any drying at all. Keep in mind though that it is extremely humid where I am right now, so perhaps now is not the greatest time to measure the harshness of any cleanser. However, this combination is working well, at least for the current weather so I am not about to go changing it :P
Other than that, this Hada-Labo Oil Cleansing is fragrance free and is affordable, being just a tad more expensive than the Softymo varieties at about 1,050yen per 200mL bottle or 840yen per 180mL refill pack. Love it! Thanks to this cleansing oil, I'm totally curious about the rest of the Hada-Labo Gokujyun line, which ranges from the main Gokujyun items to Whitening, Sun Care, and even Aging Care!
Posted by D. at Sunday, August 21, 2011

I really want to love Hada Labo, and I do like using the Cleansing Liquid and Tamagohada Cleansing Foam, but the lotion breaks me out sometimes. :(

Hmm...perhaps I should stay away from the lotion as well as I was really tempted to buy it ^.^ May be I'll get a sample size (if it comes with something else) to try out first before diving in.

Thanks for letting me know!
D.

Many people love it, and seriously, lately almost everything breaks me out, so don't not try it because of me. ^^;

I'll be sure try a sample of it first to make sure nothing goes wrong. I'm breaking out right now too so I don't want to make things any worse...