On my previous Takimibashi Suspension Bridge post, I mentioned that hubby, my sister and I had a difficult time navigating Kinugawa Onsen. From all the information source we had, it was never clear to any of us that Kinugawa Onsen is an onsen town and not a specific onsen. Particularly the foreign language pamphlets and brochure, they all have beautiful pictures of these outdoor baths along with the name Kinugawa Onsen or Kawaji Onsen (yet another onsen town in the vicinity), but never a specific name of any hotel/ryokan/onsen where we could find the baths pictured.

Getting off the train at Kinugawa Koen Station, with the map outside we finally realized we were in the Kinugawa Onsen town. To make sure our understanding were correct hubby picked up a different brochure, this time in Chinese, and it was clear as day to us in that version that Kinugawa Onsen is a town! Uhh...they couldn't put together a clearer, at least less vague, brochure in English but they could in Chinese?!? Har? I was so incredulous I had to google again to get to this Kinugawa WikiTravel page when I got back to our hostel, Sumica Guesthouse, later that night. 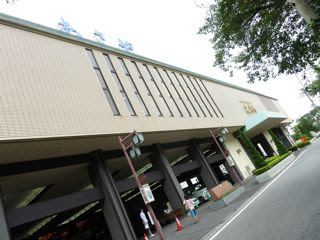 Anyway, by then it was up to us to find an onsen that is open to the public without requiring advance booking for an overnight stay, and those public bathhouses were far and few in between to begin with. The majority of the hot spring bathhouses in Nikko operate as a hotel/ryokan, and you book a room for at least one night and relax with the baths for a day or two is how things are supposed to go. It was tough for us to be walking around completely aimless without a single name or recommendation for a hot spring bathhouse. We had no idea what we were looking for, let alone figuring out where to look for it!

After crossing Takimibashi and following the street signs with "onsen" on them, we saw a large building from afar with the name Ayasa Hotel, which resulted in a collective shrugged of our shoulders. In short, we were too tired, hot, sweaty, and hungry (it was around 2:30ish and we still hadn't eaten lunch!) to go blindly shopping around for a public onsen. Hubby suggested we go in and ask if Ayasa would allow entrance for use of the baths only. And thank goodness they did. Entrance fee for use of the baths was cheap too! It was only 1,050yen per person for what was left of our day, which was almost a third the price of both Oedo Onsen as well as Manyo Club! Even Hana no Yu of Fujinomiya, Shizuoka, cost around 1,500yen per person! An onsen in Nikko cost 1,050yen? Sold!

We quickly realized we got what we paid for though. When we asked what time the hotel restaurant closed for lunch, we were told it was already closed (at 2:30ish?!?). Worse, it was also booked full for dinner. Again I was incredulous, but whatever. Seeing the disappointment on our faces, a friendly staff recommended a soba shop nearby, Yamaguchi Soba (pictures below), and we were more or less relieved to learn we could leave to get lunch and then come back for the baths.

Ayasa's lobby is actually on the 6th floor where there are also gift shops and such. There are 13 floors total in the building while they have Japanese style rooms, as you can see, it's pretty much a Western style hotel. Although the place looks glitzy at first glance, don't be fooled, all this splendor is not as well maintained as it should be. We didn't even try to take a close look to see signs of business downturn everywhere. For example, sitting down on the sofas pictured, we saw that the glass railing on every floor had not been cleaned, perhaps for weeks, because they were murky and dirty with handprints and what have you. Even that gold metal piping on the glass railing right behind the sofas where we sat was tarnished and rusty here and there, as if they hadn't been shined for a very long time. Tsk tsk tsk. 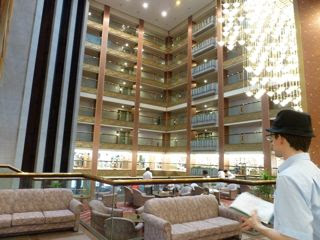 In contrast with the luster lacking lobby, some of the floors have a fantastic view of the river below. 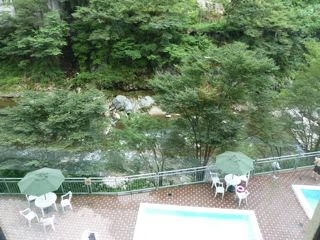 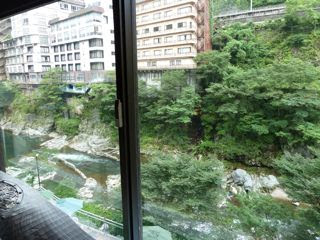 But other than the views, Ayasa's bathing facility turned out to be ho-hum as well. The large main bath was just one indoor pool. They didn't have many smaller pools with different herbal baths like Hana no Yu, or even many small pools with different water temperatures like Oedo Onsen and Manyo Club. And only after going into the bath did we realize we would need to rent yukatas if we were to walk around or go up to the rooftop baths without the hassle of putting our clothes back on. Not only there was not a private way to go up to the rooftop baths from the ground floor bath, there were no lockers in any of the changing rooms. Instead, baskets were provided for our clothes and belongings. The logic here being the majority of the folks going to the bathhouse are overnight guests, hence there is no need for lockers since they can just leave their belongings in their rooms. In the end, we did rent yukatas for an additional 500yen per person, so Ayasa wasn't as good of a deal as we had thought after all. The entrance fee for all 3 Oedo Onsen, Manyo Club, and Hana no Yu included yukata rentals, and this revelation makes Hana no Yu the best (as in many different types of herbal baths) and cheapest onsen I have been to to date!

Even Ayasa's rooftop baths on the 13th floor disappointed me a little - they were separated men and women baths, and that meant hubby was off all by himself the whole time :( I guess I was hoping for a foot bath so we could hang out together at least in between soakings, but Ayasa actually doesn't have a foot bath at all! Though I have to admit I might have been the only one disappointed on this count and hubby was probably quite happy to have rid himself of me and my sister for a while haha! xD Anyway, the view up there was mostly of tree tops. It would probably be much nicer in the fall when the leaves change colors, but in August it was just greenery and hot. A bit boring I would say. The railings were not high enough to provide complete privacy in my opinion, because the roads were right below and being just a bit over 5'2, had I stood upright I would still have flashed the drivers below. Even worse still was the sky rail car that was only a distance a way with a completely unobstructed view of both the men and women's rooftop baths. Thankfully, the sky rail car was not running that afternoon or I would have never gone up there. Not much of an exhibitionist here, no sir.

Although our first day at Nikko ended up being a bit of a bummer, all was not lost. The soba shop the Ayasa staff recommended to us, Yamaguchi Soba, was a wonderful little mom-n-pop shop with personality. Hubby and my sister had tempura soba, and I had oyako-don. Nothing adventurous, but at least it wasn't disappointing! Though I admit I still prefer the Neighborhood Chinese Restaurant's oyako-don, but that's not really fair because theirs was more like chicken katsu-don :P 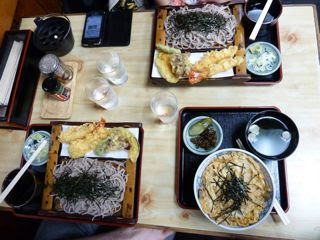 When I said Yamaguchi Soba had personality, this is what I meant - they had a gigantic collection of mini clay dolls and noh-esque masks on display all over the entire wall on one side of the shop! Just look at all that! It must have been years of travel all over Japan to collect all those! I regret not taking closeups of the cooler looking ones, but then again it is someone else's shop and I didn't want to be an obnoxious tourist :P Next time we go I'll ask for photo permission and see what they say :)

Here's the left half of the wall. 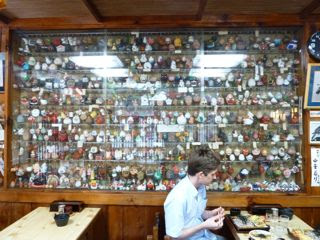 Here's the right half. 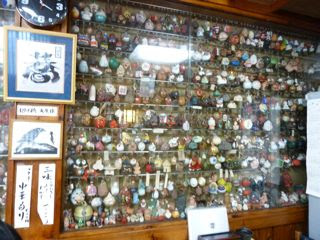