So hubby was introduced to a fellow grad student, G., who is on her way to Taiwan for the year but is stopping by Japan for the summer. She invited us and another of hubby's classmates, S. and her boyfriend M. to dinner in Shibuya with her and her friends A. and B. So despite it being sooooo hot out and I wasn't too thrill to be stuffed into a train for the ride uptown, we went out anyway because we were told G. had lived in Taiwan before and are going back next month. Since we're heading to Taiwan next, why not meet someone with experience and hear all about it?


I wore this for the night, and yes, the picture was taken right outside the door of our new apartment on the 2nd floor of the same building. Thank goodness it's twice as big as our last apartment, so we finally got some room to stretch our legs. And since we're on the 2nd floor now, we've got tons of natural light too, versus the cold, damp, and dark corner that was our last apartment. Ick. Wouldn't live there again even if the landlord paid us to! 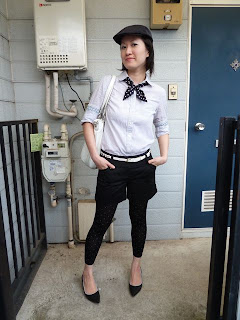 Turned out it was a group of awesome people! The world is so small indeed, because each and everyone one of us is connected to each other somehow, and I don't mean it in the Lion King's metaphorical sort of way. It's totally crazy!

- G. is from the same state as we are, she grew up not too far from where we lived and went to college! G. also did the same summer language program we did in the east coast, for the same language too, only at a different time.
- A. is from California, but went to the same high school as G., and thus both had lived near us. Several years later, G. enrolled in the same grad school with A. without knowing it until they ran into each other. A. had also completed the same year-long Japanese language program as hubby and his classmate S., only couple of years earlier.
- B. went to the same grad school with as A. and G., only in a different field.
- M. (S.' boyfriend) went to the same school as A., B., and G. for undergrad. And upon meeting M. and A. immediately recognized each other, having been introduced prior to this dinner through W., who is a mutual friend and classmate for both hubby and S. (the Japanese language program) as well as A. (fellow grad student). As for M., he is from the same state where hubby went to grad school, and he lived not too far from where we lived prior to us moving to Japan. M.'s grandparents also live in the same tiny little town where G., hubby, and I did our summer language training, and he and S. had visited his grandparents there a few times.
- S. went to the same school as hubby as undergrad, she is now his classmate at the Japanese language school.

Yeah, all that from a random get together! Nuts or what?!?


And I did wear makeup, so here's the FODN. Sorry the picture is a bit blurry, but you don't want to see my face too clearly anyway LOL! :P 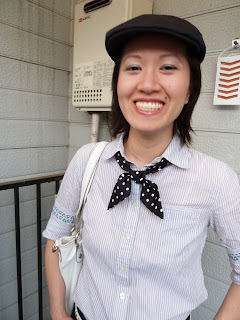 what a small world! wow!

u heading to Taiwan next? when? :D sounds like another fun adventure! hopefully u will be blogging that!

It won't be till another year or so, but yeah, I really want to go live in Taiwan for a while, and of course I'll be writing about it on this blog :)