So Benefiance is marketed to women in their 40's, but that doesn't mean no one else can use it! :P I like their Creamy Cleansing Foam. A lot. Actually, a good friend of mine, who's my age by the way, introduced it to me. She said she uses it because it smells nice. And I went out and bought a tube of it the next day. What can I say? She's a pretty little thing and she sells. 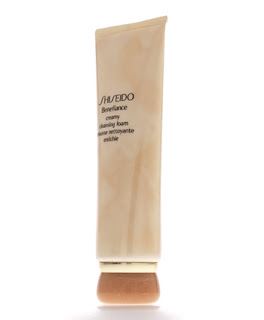 At first, the fragrance was kind of strange. But then before I knew it, it grew on me. My first impression is that it smells like an old woman's lotion. But then when you give it a better whiff, it has this very gentle powdery scent. Very soothing. I've been using it for the past 2 years now. I stopped for a while because I thought it was drying out my skin. But then we all know who the true culprit is - the Shiseido Ultimate Sun Protection SPF 55 PA+++. Yes, the goddamn sunscreen. I gave my barely used bottle away to tweenage brother, and what do you know, it cleared out his acne - yes, it's THAT drying!!! But it's kind of cool he actually uses it. He used to be like, "Sunscreens are for sissies!" Now he's like, "Hey, my sunscreen's running out! Crap! Gotta swing by the Shiseido counter get a new bottle (and make my other sister pay for it)!" Brat.

Anyways, back to the topic.

The Creamy Cleansing Foam does what it claims. It washes well, but doesn't fry my dry skin. Did I mention it smells nice? It does not create a soapy or bubbly lather, but rather a creamy one. And you don't need much at all for a nice wash. Just tiny little bit will do for the face. I also use it to wash my neck (front and back) and chest, so I use about pea-size dollop. I use it twice a day in the morning and at night, and it lasts for months and months and months. If I counted correctly, my last tube lasted me a whopping 8 months!! So yes, it's expensive, $33 a tube, but for 8 freaking months it's worth every penny.
Posted by D. at Tuesday, June 03, 2008

I love the foaming cleansers from shiseido too! I decided to make it my first cleanser splurge 3 weeks ago because I am getting a bit tired of clean&clear plus I've always using my mom's shiseido stuff when I was little and nothing happened to my skin all those time. (which is quite sensitive/reactive)


The one I got was from white lucent (I don't usually believe in any whitening stuff plus I have pretty fair skin and I don't mind being a little bit tanner for the summer, but hey...it smells nice and cleanse really well...) I like it how a little dab would give me a full face of whip cream.


Speaking of loser, remember I was complaining about evecare the other day? I ordered two Anna Sui item from them *again* ...it was a really hard to find powder case and a blusher (which was on sale, a dollar cheaper....ahem)

Oooh...White Lucent! I've never tried that line before! Hmm...I don't believe in any whitening stuff either but may be I should swing by my local Shiseido counter for a sample. You make me curious now :D

Haha...well, who can blame you? Evecare does slash those prices and make the items all the more tempting :D By the way, have you tried sasa.com? The last time I went there I saw a few Anna Sui items. Expensive as hell, but their service is a whole lot better than Evecare!

Sasa...I went the site and their price is bloody(an Anna Sui blusher will be $24 bucks in evecare, but in sasa it's $37, ripe off) ...I might as well just ask my mom to buy from the actual store in Hong Kong and ship it to me, I will not only save the shipping and handling but also the cost of the actual product...that probably won't happen, because I am always trying to conceal the fact from my mom that I am spending a good trunk of my job money on something that I just collect and rarely use...

But I like to shop at the actual stores whenever I was in Hong Kong...they got quite a bit nice Japanese drugstore brands...

One of the reason I got something from white lucent was that the associate recommended either that or the line pureness since all I need was just a cleanser and pureness was more intended for slightly oily skin. (I have normal skin type if I stay away from all those random skincare products and base makeup, if I start using those random stuff, my skin react really badly... it's like if I wear Aveeno sunscreen that is claimed to be oil-free, I will break out within 3 hours, then when I use salicylic acid acne treatment,my skin starts peeling the second day. Now I just use a water-based sunscreen on a daily basis...it worked great, btw it was a Asian line by Shiseido called Whitia. Since this line sorta act as a color correcting base that make my skin pinker, I might just get the Anessa next time. )

I am probably sticking to shiseido in the future.

Bloody hell indeed. Or may be you just have expensive tastes :P just kidding. Every now and then I get lucky with Sasa and get some stuff for really cheap, that's all :D I got all my B&C Lab lip & moist creams from Sasa for a bargain, and when you spend $75 (same with Sephora) they'll ship it internationally to you for free. So I usually save up all my Sasa "ammunition" and get all the stuff I want at once and get free shipping :D

I'd LOVE to visit Hong Kong one day. So jealous of you!

Ah, normal skin - have you tried Lancome Pure Focus Lotion/Gel Cream? The Lotion in the pump bottle, or the gel cream in the far, works quite well for my t-zones. It controls oil really well, and it has just enough salicylic acid in it to clear out my pores without peeling my skin like a potato. I would recommend it for t-zones only though as I don't use it for the rest of my face so I can't say...

As for sunscreen, have you tried Sofina Perfect UV? I LOVE it!!! Feels like nothing on my face. And absolutely no dryness either. Oooh, and when you do try the Anessa, let me know how it turns out for you. I've been curious about that sunscreen for a long time but haven't been quite ready to give up my Sofina...