I felt like trying something random today, so I grabbed OBS Milk Face Pack from my fridge :D OBS is a Korean brand and that's about all I know, unfortunately. Perhaps somebody will drop me a clue or two? Please?

The Milk Face Pack is a wash off mask type that's supposed to be moisturizing and soothing. And it delivered these claims decently, much better than expected. I was thinking since it's called a milk pack, it would be white and opaque, you know, like milk. Nope, it was translucent and more like coconut juice. It smelled like coconut too, actually! 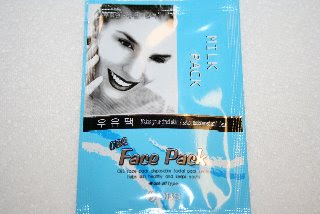 The Milk Face Pack dried clear and upon contact with water, it puffed up and got somewhat slimy in the same manner as the Avon Hydrofirming Drench Recovery Mask, only it washed off much easier than the Avon mask. And man, I totally underestimated how moisturizing this mask would be, that was, until I put on the usual amount of my lovely Cetaphil Moisturizing Cream. My skin just felt so over saturated with moisture I had to wipe off some of Cetaphil cream to lighten things up a bit. Too bad Sasa.com isn't carrying anything from OBS at the moment, because I actually went back wanting to get some more, at least to see what other masks they have. And the Milk Face Pack was cheap too, something like $0.50 a piece!
Posted by D. at Friday, March 13, 2009