It's been a couple of years, but I've finally got my hands on a couple more of these T'estimo Color Lighting, and what do you know, I just had to try them right away :D

EX-09 is a lilac-toned highlighter, you can't really tell from the picture at all, but I guarantee you it's lilac :) The whole pan is rather pale, but the three circles in the middle are definitely lilac, and they're pressed all the way down the bottom of the pan too, not just a thin layer at the surface. On top of them though are three circles of over-sprayed lilac shimmers arranged a bit skewed to the right as though are overcasts. This layer is gone after the first use. The highlighter is not shimmery at all but rather very subtly pearly, and even then, you'll have to swipe some on the back of your hand to notice the fine pearly shine. 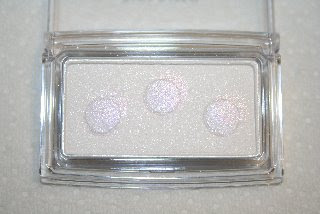 To be honest I'd never had a highlighter that was lilac before. The highlighters I'd tried had white, pink, gold, green, and blue, but never lilac or anything purple-ish. So I wasn't too sure what this highlighter was supposed to do, but I wore it during the day anyway. The powder was soft and was neither chalky or dusty. After putting it on, though, I was quite disappointed - I couldn't tell any difference at all! I thought, damn, it's T'estimo, I was so sure I was going to like it! And then I put on some blush, and -wow- my face just got this strange...glow. It was subtle, nothing like the airbrushed effect, but it had this very healthy glow to it that wasn't there before. I looked awake and fresh! But then I wasn't about to just credit the highlighter, after all, it might have very well been the blush. So on another occasion, I put the blush on first instead of the highlighter (as I usually highlight first) and the glow wasn't there. Then I applied the highlighter, and -poof- there it was again, that glow! So I think this highlighter does have some effect after all, but that effect is not visible without a follow up blush. So yes, I am rather happy with this highlighter :D It's like a more subtle version of the highlighter in the Canmake Cheek & Highlight. And because its effect is too subtle for the night, I have to say it's definitely a daytime highlighter. Don't even bother with it at night, you won't see a thing!

EX-11 is entirely white, even the 3 circles in the middle. The 3 shimmery circle over spray are iridescent, but they disappear after the first use so really, they're just for appearance. Again, the powder is soft but not chalky or dusty. And while this highlighter is not overly shimmery by any means, it's definitely a lot more shimmery than EX-09. In fact, I think I've found a 24-hour highlighter - a highlighter that's suitable for day and night use! *squeals in happiness* It's like a more subtle version of my beloved Victoria's Secret Mosaic Highlighter but at the same time, not at all over the top for day use. How is that possible? I guess I'm just lucky! A total keeper! *smooch*