New month, new oil cleanser! Well, actually I've been using this HJB Skilabo Cleansing Oil since late January :P
HJB is a generic brand as generic as they can come. Yes, that means everything from skincare to facial tissue to whatever else you can think of. I was getting bored of the usual drug store brands like Softymo, Naive, and even DHC, but at the same time I don't want to shell out big bucks for the department store brands. Why should I, when the drug store stuff works just as well, if not better? That was when I thought of trying the generic brands, just for kicks. I can always get Softymo, Naive, DHC, Biore, Dove, what have you, online so it doesn't really matter whether or not I'm in Japan. The generic Japanese brands, however, are only available in Japan. 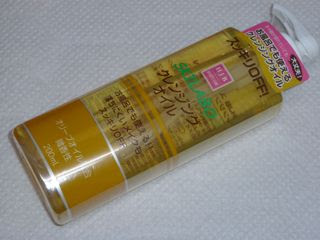 Turns out I like this Skilabo Cleansing Oil a whole lot! The first thing I noticed was its light and flowery peach scent, and I said flowery because it reminds me of the banana blossom essence they use a lot in Vietnamese cuisine, especially in desserts. It wasn't until a few days into using this cleansing oil that I finally figured out the scent is actually peach, and it isn't sweet like other Japanese peach scents or a heavily ripened fruit scent like the Etude House Happy Tea Time Cleansing Foam Peach Tea. Funny to say, but I really enjoy the scent of this cleansing oil!
Next up is the texture, it's not thin but somehow still feels lighter than most cleansing oils I've used, and not in a silicon-y way. That said, it removes my sunscreen and makeup just as well as the others, without getting too drying as oil cleansers can sometimes be. In fact, I would say it's quite the opposite and this Skilabo Cleansing Oil actually softens my skin! I was truly amazed the first time I used it as my facial skin felt like a baby's and I was so giddy I kept patting my cheeks, scaring my hubby into a distant corner of the apartment ^.^
It's not a perfect oil cleanser, of course, and its major fault being that it does not rinse as clean as the others do. Yes, that means it does leave a slight thin film behind after rinsing, similar to most cleansing creams. To my surprise, however, I was able to tolerate it, even though I normally hate the feel of any greasiness at all on my face, especially after washing. I guess the thought of that baby skin afterwards really won me over xD
Last but not least, this cleansing oil is by far the cheapest cleansing oil I've ever purchased! I paid only some 400yen for it and didn't expect much but it turns out to be quite nice! Love it when that happens :D
Posted by D. at Tuesday, March 01, 2011

I'm always looking for good cheap cleansing oils, and I double cleanse anyway, so this sounds like a good one to try. Thanks for the review!

That's my philosophy too, and I just think paying some $60 for a bottle of cleansing oil is beyond absurd, especially when I do follow up with a mild cleanser just as you do.