I didn't mean to buy this Lipstick Queen Frog Prince Story, a set containing all three Frog Prince products, Lipstick, Cream Blush, and Lip Gloss. As gimmicky as they all appeared, I was only curious about the lipstick, just as I was with Hello Sailor. However, at the time the individual lippie ($25) was more expensive than this whole set on sale ($22.50!), so the set was what I got. 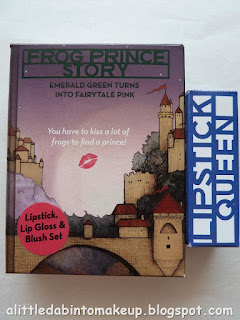 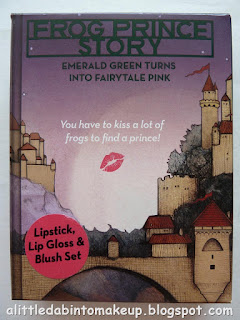 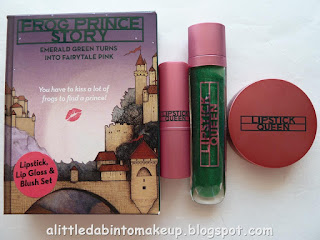 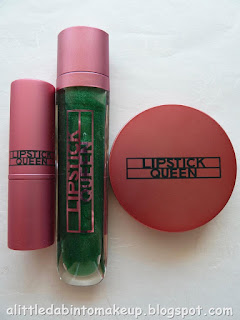 Turns out this whole Frog Prince line works out fine for me and I should have skipped Hello Sailor altogether. The only complaint I have is that the Lip Gloss has a ton of obvious green(!) shimmers in it, which strikes me as odd because both the Lipstick and the Cream Blush are shimmer-free. Perhaps they thought shimmers in the gloss would make the green goo less intimidating? Then again, if someone didn't find the green lipstick bullet and the green blush intimidating, why would they be intimidated with the green lip gloss?

Anyway, if I didn't like shimmers on my lips before, I hate them even more now. Because even after thoroughly wiping my lips clean, the shimmers would stubbornly stay on and let me tell you, it's quite unsettling to see sparkles on a 4.5 months old's chubby cheeks. 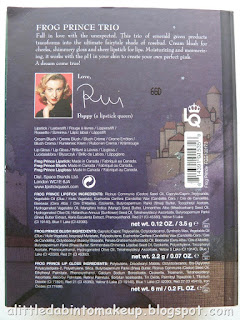 - Frog Prince Lipstick: I mentioned the trick lipstick my friends pranked me with in middle school. Yup, it looked exactly like this Frog Prince, only its tube was pink plastic instead of pink brushed metal with a somewhat sticky feel as the Saint Lipstick tubes. The lipstick bullet itself was the same shade of pink, turning emerald green upon application, basically doing the exact reverse of this lipstick. 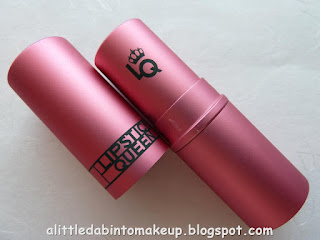 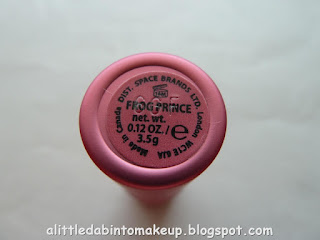 Frog Prince has a texture identical to Hello Sailor, both similarly balmy but slightly thinner than Medieval, very moisturizing and glossy. Whereas Hello Sailor didn't do jack squat, Frog Prince actually works on my lips, changing color instantly upon application, giving me a "rosy pink" just as promised. Blotting or waiting for Frog Prince to wear off leaves behind a bright and warm but not quite hot pink "stain". So why the quotations around "stain"? Because this "stain" comes right off, leaving a pink smear on my cloth napkin. Oh well. I'll just wear it like any other lipstick. 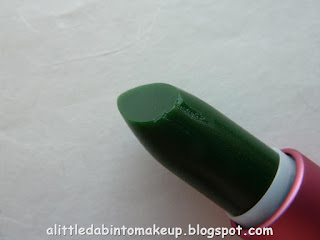 - Frog Prince Lip Gloss: I grew out of lip glosses years ago and never would have bought this gloss on its own. That said, this is quite a lovely lip gloss spare the shimmers. It comes in a long slender tube that tapers at the bottom and the applicator is a standard fuzzy doe foot. The texture feels like a thick gel-balm, moisturizing and doesn't bleed beyond lip lines, not at all oily or gooey. The gloss applies smooth despite all the shimmers, with zero grittiness. Too bad the Jean Queen Lip Gloss was discontinued or I would be tempted to try it also.

Frog Prince Gloss turns the same rosy pink as the lipstick and the green shimmers aren't really visible unless I scrutinize my lips. It leaves behind the same brighter and warmer pink stain also, an actual stain that stays on and doesn't wipe off. To see how long the stain wears, I wiped off the gloss itself and layered on clear lip balm. This combination lasted for a couple of hours, which I thought is pretty decent. 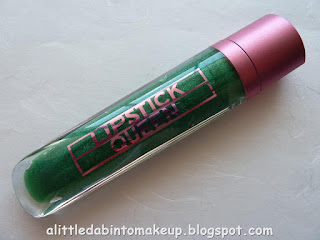 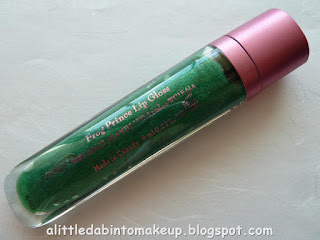 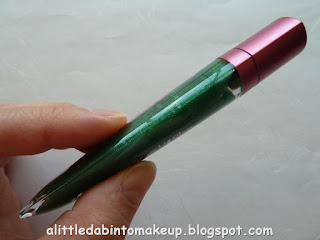 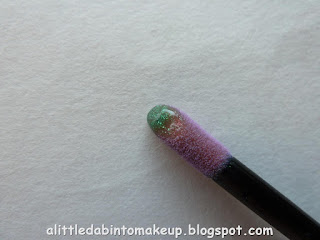 - Frog Prince Cream Blush: this cream blush comes in a similar-looking packaging as the lipstick tube, only it's plastic and not metal with a sticky rubbery feel. They call this a cream blush but it feels like a jelly formula to me. It's also the least pigmented in this set and my cheeks only get a faint rosy flush. That said, I'm kind of glad--sheer means goof-proof, especially with a color-changing blush. I have few opportunities to wear blush these days, and when I do I just slap some on and go. There's just no time to waiting around for the color to change and buff off the extra. 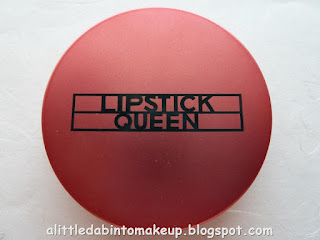 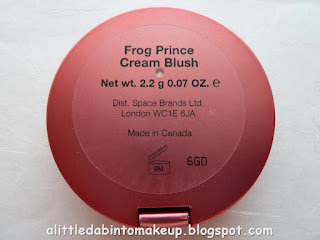 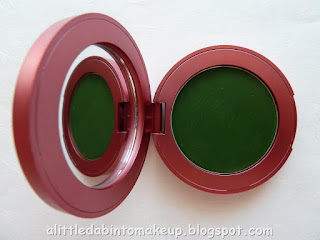 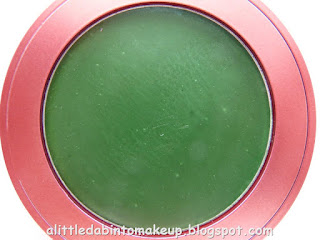 From left to right: Frog Prince Lipstick, Lip Gloss, and Cream Blush. I know the swatches (left photo) and the stains (right photo) appear weak, but the lipstick and gloss both show up pretty well on my lips. It's just the blush that's sheer on my cheeks. 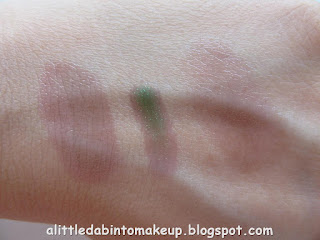 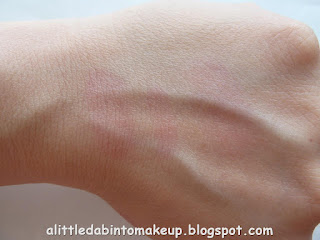 i want to see your baby!