Since we live in Yokohama with more options of Ethnic food, my sister charged me the task of finding something close to our favorite noodles soup. I'm saying something close because there's just no replacement for it. You see, my sister and I grew up eating these noodles, among other delicious things from the various street stalls stationed along the alley where our grandparents lived. Every morning, we would wake up and run out to the stalls still in our pajamas, and pick what to eat that morning. Those are some of my most cherished childhood memories that I often recount to my hubby, who used to say I was just nostalgically biased with these noodles.

Then a couple of years ago, I took him on a trip to show him where I was born and spent the first ten years of my life. Miraculously, that noodles stall was still there, though the woman who originally ran the stall had retired in old age and her daughter had taken over managing the stall, carrying on her mother's noodles legacy - no joke, folks, these noodles are legendary! The daughter is in her fifties and was a classmate of one of my aunts during middle school. What a small world, no? Anyhow, for many years the daughter had helped her mother manned the stall, and as soon as my sister and I showed up she recognized the both of us immediately, marveling at how time had flown and we had grown.

These are "our noodles," the very noodles my sister and I grew up eating! And then one slurp of our noodles soup and hubby duly agreed he never had noodles as delicious as these, and he's had lots and lots of noodles. As you can see from the picture above, these are just egg noodles in clear pork broth (it could be chicken too) with slices of chicken breast and wontons. But damn, it was ambrosia! Even after so many years, the noodles still tasted exactly as it did when my sister and I were children. The daughter is continuing her mother's noodles legacy indeed and my sister and I salute her by making a point to find the likes of "our noodles" no matter where we live. Sadly, to date no matter how hard or where we looked, we have yet to find anything that comes within a mile of these god-send noodles.

But I digress. Sorry, that was a rather rambling introduction to a simple Thai restaurant. But to make it short, I have given up on finding "our noodles" from Chinese restaurants here in Yokohama. "Our noodles" aren't "Chinese" noodles per se, but they definitely have Cantonese influence, which makes me wonder what the hell am I doing in Yokohama? I need to be in Hong Kong or Taiwan!!!

Anyway, one afternoon hubby and I wandered about the Yokohama Station and stumbled upon Tinun Thai Restaurant on top of the Yokohama Cial, which by the way is closing its door after March 2011 after 50 years in business! Holy crap!!! Hubby and I were there again just today and they had all these crazy sales going on! I bet it's not closing closing though. A year or two (or several months) later it will reopen under a different name, and then they'll have even more crazy grand-opening sales. I do feel bad for all the people who work there though. What a blow to them and their livelihood, especially in this terrible economy. 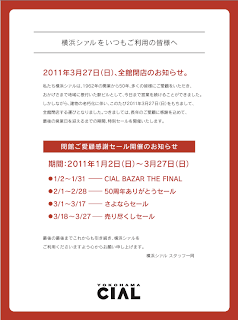 Sorry, I digressed again. Tinun is a chain, and on the top of my head I can remember a branch store in Kanda, right smack in the middle of the Jinbocho Used-books District. That late afternoon, Hubby and I only had noodles for snacks since we were going to head off else where for dinner. I don't remember the names of the dishes we ordered because they were in Thai, however one had clear broth and the other a darker, more hearty beef broth. 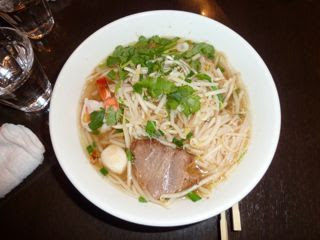 For the noodles in clear broth, we had a choice of rice or egg noodles and I stupidly chose rice noodles. When the waiter laid the bowl down in front of me on the table, I immediately texted my sister in excitement, "I found noodles that sorta smell like 'our noodles'!!!" Just the aroma though, I'm afraid, because one bite into it and I was sorely disappointed. Don't get me wrong, it was decent noodles, just nowhere close to "our noodles" :P Admittedly it would have been better had I choose egg noodles, but still, the broth tasted very different from "our noodles" even though its aroma was reminiscent of "our noodles." This broth was greasy and heavy and somehow managed to be bland at the same time. What a shame. And plus it had shrimps and a quail egg, which was kind of weird to me. To me, I said! Why weird? Because it wasn't a seafood noodles or a meat noodles. It was half and half, not quite either but somewhere in between, which frustrated me. I wished the chef would make up his darn mind already which noodles, seafood or meat, he was going to serve me. 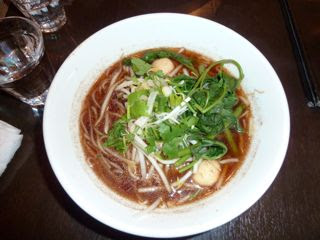 I wasn't too thrilled with other rice noodles soup either. It too had a greasy and heavy broth, markedly heartier than the clear broth in addition to being a tad too sweet. The aroma and taste was reminiscent of Vietnamese Rice Noodles in Beef Stew (Hủ Tiếu Bò Kho), only overly sweet and not savory enough in addition to being way too greasy.

But hey, visiting Tinun Thai Restaurant gave me new hopes of finding the likes of "our noodles." Instead of searching for it in Chinese restaurants, I'm going to target Thai restaurants instead since many of Thai noodles have similar tastes to Vietnamese noodles xD
Posted by D. at Tuesday, January 25, 2011