Not *my* neighborhood, but hubby's colleague W. and her husband M. invited us out to Roppongi Bon Odori Saturday afternoon, so why not? We actually got off the train at Azabu then walked from there to Roppongi. There was a gigantic festival in Azabu that went on for at least a dozen blocks right up to Roppongi, where Bon Odori was held.

Oh man, we had no idea what we were walking into until we got there. There are 13 millions people in the Tokyo metro area and I swear they were all there at the festival! My photos just don't do the crowds any justice at all. Actually, I couldn't take pictures of the crowd because, well, we were pressed back to back and inched along heel-to-heel. Add in heat and humidity and it was a disaster. We were all drenched in sweat and could take pictures only after having escaped to a smaller alley, and thus it looks like hardly anyone was there when it couldn't be farther from the truth. 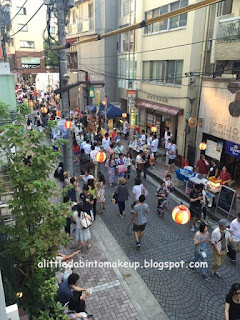 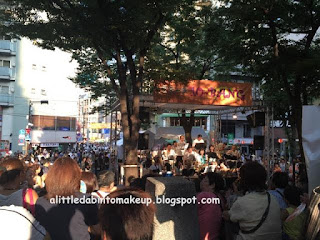 But at least we'd gone to a Japanese festival before, whereas that was W. and M.'s first and I think they were a bit bewildered ^.^ We snacked as we walked, having fried chicken, beer, beef kalbi on skewers smothered with minced truffles (they were crazy pricey --$8/skewer-- we didn't know we were ordering beef with truffles LOL!), and shaved ice (coconut with shaved dark chocolates and white peach with condense milk). 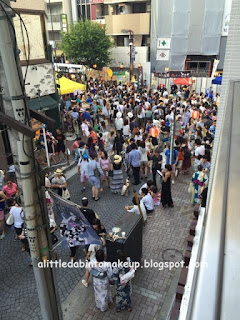 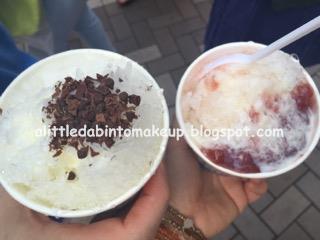 Bon Odori in Roppongi was no less crowded. In the photo below, we were close-ish to the stage and so couldn't capture the crowds behind us. After staying for a song, we couldn't suffer the crowds anymore and left ^.^ 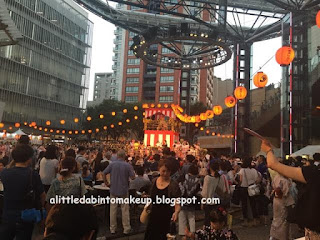