Mos Burger is Japan's answer to McDonald's ubiquity. And a much better answer, I'd have to say. Case in point - hubby refuses to eat at McDonald's at home but will dine happily at Mos'. We've eaten there a couple of times already within the past 2 weeks. Compare that with never. At home, the most he will compromise with is Chik-Fil-A once every other month, or if I'm lucky, Wendy's once every blue moon. But McDonald's? Never ever.

Mos Burger not exactly what you would expect in an all-American burger because it caters to the local flavors. Hell, even McDonald's in Japan tastes very different, and not in a good way I'm afraid :X I learned that the hard way. Way back when I was a JET and homesick (and sick of eating Japanese food everyday for 3 months straight), I made my very first trip to Takaoka Eki's McDonald's hoping for a taste of home. Well, bad idea, because it didn't taste anything like home. It was actually really disgusting. Not only the fries were soggy and dripping with grease, they were fried in an oil that tasted really strange, almost like it had some weird chemicals in it (it probably did). My chicken McNuggets were fried in the same oil, and they too were soggy and had this odd chemically taste. Even the ketchup was weird! I was badly scarred from the incident and never again did I expect any McDonald's outside of the US of A to taste like they do inside the US of A.

But Mos Burger isn't like that. No they don't serve up burgers like burgers are at home, but their fries and nuggets didn't have any weird taste in its oil. They weren't soggy or dripping with grease, quite the contrary, they were delectably crispy, just like they are at home! Even the ketchup tasted uncannily like ketchup! To satisfy my craving for hot dogs I ordered a spicy chili dog, and to my complete shock it came topped with pickled jalapenos that were actually crunchy and spicy. Holy crap, even at home the pickled jalapenos were either crunchy or spicy and never both! And check this - the chili dog I ordered from Mos tasted better than the chili dog I had at Sonic's! The chili actually sorta tasted like the *real* chili at home, or at least it was heading in the right direction. I was impressed enough to order 2 chili dogs on our second visit to Mos. Enough said. 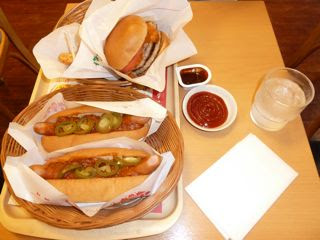 Hubby ordered a spicy burger and swallowed it whole before attacking half of my chicken nuggets and 2nd chili dog! For someone who refuses to eat fast food at home, that's saying something.

So the conclusion is - as long as you are open to the idea of a burger that isn't exactly a burger you know (twisted logic, I admit), Mos Burger is actually really decent.
Posted by D. at Friday, September 17, 2010