Had dim sum tabe hodai (all you can eat) for dinner at Shofukumon inside Yokohama's Chinatown. From the East Gate, take a left, and Shofukumon is just a couple of blocks down on your left. 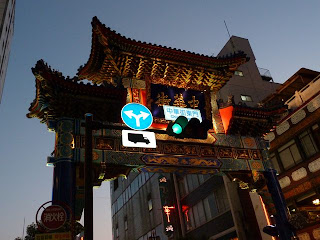 Shofukumon is a huge restaurant by any country's standards with 6 floors! Check out their floor guide with seating arrangements! We were on the 2nd floor, where they serve all you can eat dim sum. 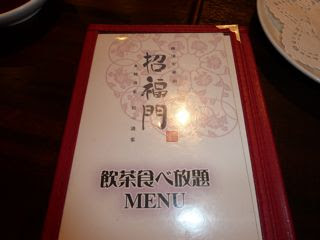 Hubby and I were expecting "Japanized" dim sum, as the majority of Chinese food we have had in Japan prior to this were basically greasy stir-fries doused in sesame oil. But the dim sum here was surprisingly good, and for 2,700yen/person (~$33), it was a tad expensive, but not an extortion by any means. What was expensive, however, was the alcohol that was an absolute must for the dinner. We had our money's worth in dim sum, then lost it all back in the alcohol. Damn! LOL

Hubby's favorite was the soup dumplings, which was good enough to give Joe's Shanghai a run for its money. To me, the most significant difference was that the soup inside the dumplings at Shofukumon ran clear, where as its counterpart at Joe's Shanghai was murky with grease and icky run-offs from the cooked meat inside. All that said, my favorite at Shofukumon was not the soup dumpling. Rather, it was the shark fin (big) dumpling in broth. Now that's a good dumpling. Just about perfect. The broth it came in was just as delicate. Not bland, but not overly flavored either. 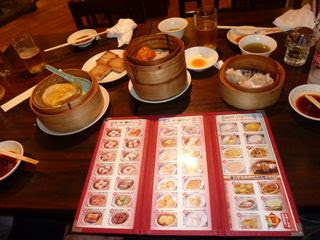 What, who are you kidding? Of course we had to order the most expensive stuff on the menu! :P

But I have to say the best dim sum I've had was not at Shofukumon. And no, sorry Denver, but not there either. So far (and I'm saying so far because I haven't tried another dim sum place at Yokohama Chinatown yet), it's at a seemingly unknown restaurant called Wonder Seafood Restaurant, located in Edison, New Jersey.

Wonder Seafood serves dim sum around the clock, but don't let that deter you. One bite into their shrimp hargao and dim sum everywhere else will never be the same again. My favorites are the shrimp hargao (of course!), fried pork & shrimp dumpling (thick and sweet mochi shell deep fried to a crisp with ground pork and shrimp inside), sesame balls (yes I like my food fried and crispy), and steamed Chinese BBQ pork buns. They also have this clam in black bean sauce dish that's just absolutely delectable! But these only come out during the dim sum brunch on the weekends. Even then, you'll have to be quick, because they'll be gone the moment they are brought out.

If you are thinking of having brunch on weekends to experience the push carts, you should come before noon or the line will be out the door. This means if your party is small enough, you'll be seated with a bunch of strangers at a big round table.
Posted by D. at Friday, September 10, 2010