Too bad Sana discontinued their Maikohan line, because these Maikohan Cheek Colors rock! They only come in 2 varieties: Akane (Madder, reddish orange) and Benisakura (Red Cherry Blossom, pink). I bought the Benisakura first, loved it, then went back and bought Akane later but didn't get a chance to take photos before having to pack everything up for the big move. So here they are, finally.
Outer packaging for Maikohan Cheek Colors. All pictures taken in natural light without flash unless otherwise noted. 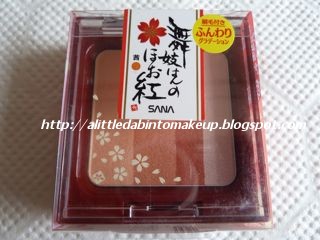 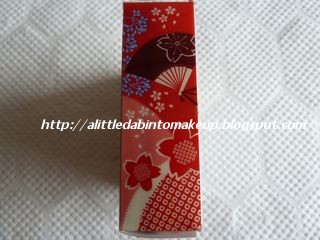 I really love the red with sakura motif packaging for Maikohan items. It's just very simple but elegant at the same time, though I must admit it can still be improved a bit as it's a tad bulky. Also, I usually never pay much attention to the outer plastic packaging, but I have to say that's a pretty plastic box, no? Anyway, each compact comes with a brush that's okay, but again I don't use this brush so I don't really care for it.
Akane and Benisakura (picture taken indoor with flash). 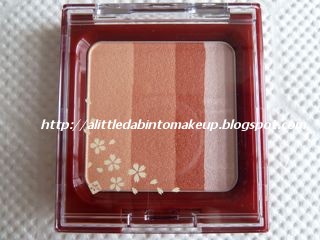 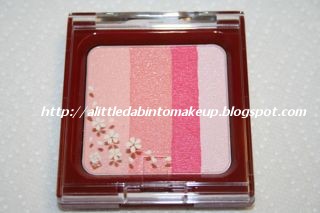 These blushes are unscented, and while they're not the silkiest blush around, they're still pretty soft. I like that they're decently pigmented. I only need to slightly swirl my brush around and shake off the rest to get nicely flushed cheeks, sometimes even too flushed, actually, and I have had to wipe off some (like this morning...). They do have shimmers, but the shimmers are very finely milled and the blush goes on with a luminous satiny finish.

- Akane: funny enough, while this blush looks totally orangey in the pan, it swatched more of a coral-y peach and goes on my cheeks with even more pink. So despite all the orange in its appearance, I don't get any of it. Don't get me wrong, I love the pinky peach that it gives my cheek, but damn, how hard is it to find me an orange blush that will stay orange on? I guess I can always go to the bright tropical orange in Canmake Cheek Gradation 06 Candy Stripes. 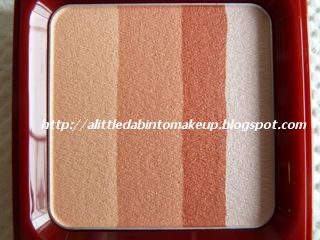 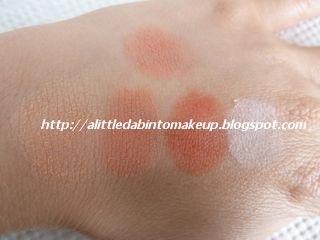 - Benisakura: and this I thought would be totally girly pink on me with that hot pink bar and all, but it swatched more of a muted rose and goes on my cheek with more red.
Picture taken indoor with flash. 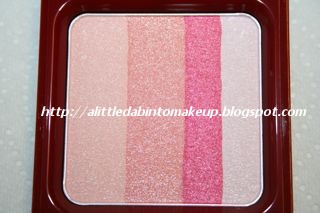 Swatches were done in the same order as the color bars, with the top dot being the blended result of all 4 colors.

A lot of orange turn coral on my as well (including the three canmake ones you got me = = but I like orange-coral as well so there is no harm) but I found that the one with golden/bronze undertone usually stays true. The first orange blush I had Paul & Joe harvest moon was even described (on Urban Outfitter's site) a straight up bronze...I like it all year round for the apricot kind of flush it gives.

P.S. I think google just made the word verification a lot less legible (and longer)...

Aww...really?!? I'll send you a Canmake Cheek Gradation in 06 Candy Stripes next time. It has a really bright orange stripe at the very top that actually does stay very bright orange on me. Mean while, the ones with golden/bronze undertone tends to turn reddish on me instead.

Oh, I didn't realize I had word verification on... *goes to check*