In the fall of 2018, Maquillage revamped the Dramatic Rouge line with both new formula and packaging. The revamped line is called Dramatic Rouge EX, and the emphasis was that the lippies can be worn sheer or layered for a more dramatic look. The "sheer" part and the somewhat better looking tubes sold me and I picked up five colors to try: OR420 Naive Optimist, RD365 New Starlet, RD430 Passion Inside, RD540 Diver Red, and the winter 2018 LE RS377 Faint Smile. 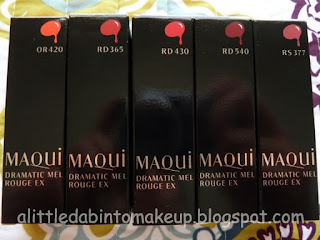 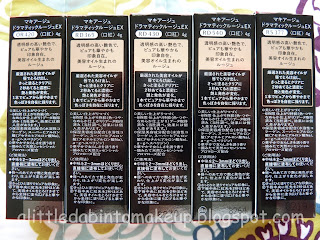 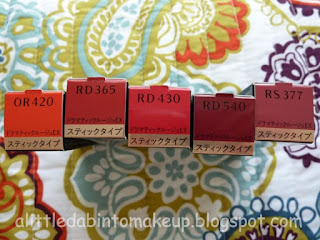 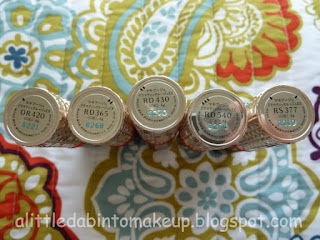 So, the new tubes. I like them better than the old ones for sure. They feel better in my hands even if they're not necessarily any sleeker. They do appear slimmer though, what with the black octagonal cap being half the tube now. The gold tile body is reduced to other half, with the tiles themselves smaller and less "bumpy." Why not just make the whole tube black octagonal, I wonder? 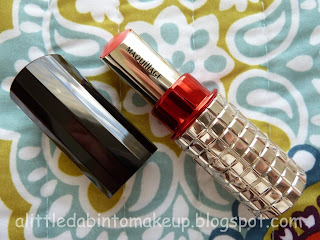 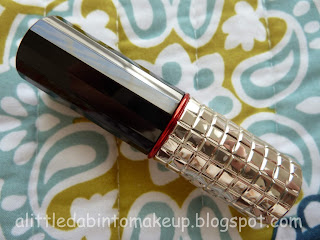 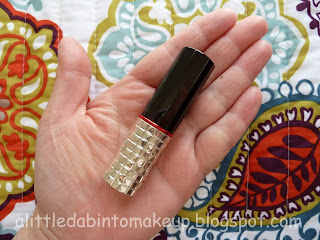 See how the new tubes appear slimmer and shorter? Just optics, unfortunately, although they do store better. 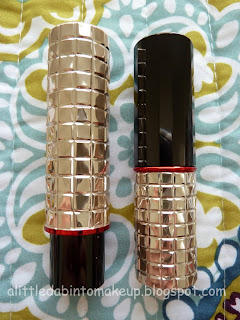 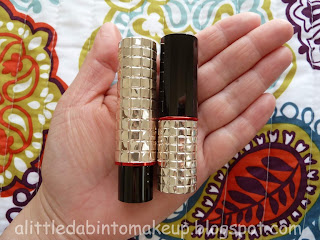 Formula wise, I actually prefer the old version, the original "oily" formula that is. That said, there's not a significant difference between the two. The new version is just as thin with the same glossy finish, only a touch creamier and less oily. The reason I prefer the old "oily" formula is pigmentation. Despite the emphasis on layering, the new formula is more pigmented. It shows pretty well on my lips with just one layer, and more layering just means more color than I'd like for daytime wear. Even then, the new formula isn't consistent either and some colors are more opaque than others, like RS377 Faint Smile below. And that's not to mention the bait-n-switch with the bullet looking totally different than how it applies. Overall, I'm happy to have tried these, but unless there's a gorgeous sheer red, I probably won't buy any more of them.

- OR420 Naive Optimist: shimmer-free, semi-translucent coral with a natural finish. 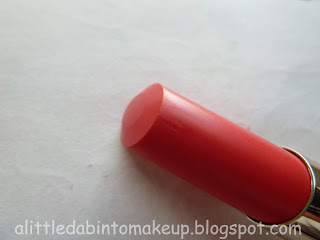 - RD365 New Starlet: shimmer-free and translucent warm red. Despite the bullet appearing a darker, if not brownish red, this color turns out to be more of a coral-red on me. 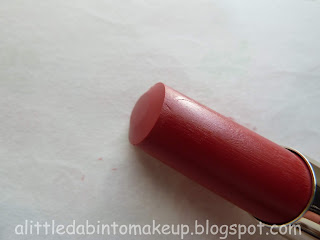 - RD430 Passion Inside: translucent pink-red with scattered gold shimmers that don't show. The bullet appears a warm red but applies rather pink on me. 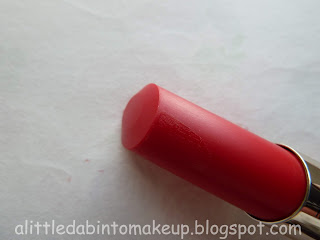 - RD540 Diver Red: a semi-translucent and cool-toned, almost raspberry red, again with scattered gold shimmers that don't show. This is another bait-n-switch if you ask me. Look at the bullet and the swatch! The bullet looks totally brown-red but this color not at all warm. 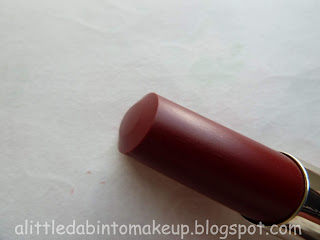 - RS377 Faint Smile: a semi-opaque red-rose with pigmentation and creamy finish similar to many of the previous Dramatic Rouge released in the recent years (versus the original oily formula). 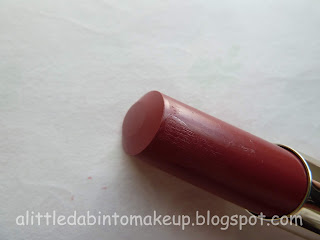 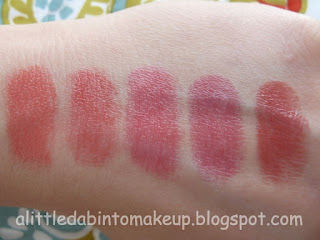 I still use the one you gave me. Sad these didn't satisfy you! Have you tried Aube or Coffret d'Or? I used to love Coffret d'Or lipsticks, but I haven't bought any new ones in years because I have so many lipsticks...

Also, I sent your package yesterday! Sorry it took so long >.<

Oh goodness gracious, you're sending me goodies and you're apologizing? THANK YOU SO MUCH!!! xD

Did I send you the old Dramatic Rouge or this new one? The older version with the oily formula is better I think. Yes, I totally hoarded Coffret D'Or lippies until they discontinued them (http://alittledabintomakeup.blogspot.com/2017/03/coffret-dor-premium-stay-rouge-part-vii.html). I tried several new CD lippies too and found them too pigmented, even more so than these Maquillage ones if you would believe it! If you want to try some, I'd be more than happy to send to you!

Wow, you did hoard a lot of those! I think the last lipstick I bought from them was in 2011? X'D

You did send me one of the old ones! I don't think I'll ever get through all the lipsticks I own, and I'm currently trying to destash a bit as I might move soon, but I don't know yet.

Yeah well, I won't ever get through all my lipsticks either, although I do go through quite a few sticks of balms and sheer lippies.

Oh boy, moving soon, exciting! Let me know where you decide to go!

Best of luck and cheers,
D.

The really balmy ones like Opera or Lip The Color (still lol'ing at that one) I can actually finish (or I throw them into a bag and they melt oops), but the pigmented stuff like Maquillage? No way.

Nothing's decided yet, but I need you to wish me a lot of luck next week! >.<

Yup. That's the same with me, as I slather on the balms and sheers but seldom reach for the pigmented stuff. To me, pigmented stuff are more "statement making" and are reserved for photo sessions and special dates (which we rarely get to go on, ha...).

I use the pigmented stuff quite a lot too, but for some reason only at home and rarely to reapply on the road.