***Disclaimer: Please note these posts are retold as interpreted. They also reflect my own personal views and opinions and not those of the seminar,  its professors and lecturers,  or affiliations. In addition,  these photos and stories can be quite tragic and gut-wrenching,  so proceed at your own risk. Some of these photos I did not watermark,  because I feel it would be a good thing to pass them on.***

On the third day we took a long (5 hours?) bus ride to Miyagi's neighboring prefecture, Iwate to visit a town call Kamaishi, also hard hit by the earthquake and tsunami. Before leaving Sendai though, we made a brief stop at the Sendai castle park to see the ruins of the Aoba Castle. 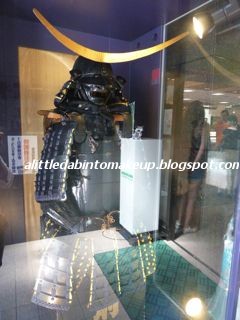 The actual castle was burned down in the fire bombing of 1945, but bits and pieces of its outer wall and the watch tower still remains. We didn't wander off that far though. Because the castle was built on top of a hill, so the watch tower is way off else where. Watch a video I took of the view atop this hill where the castle used to stand. That is a gigantic Buddha statue in the far distance (see video). Being up that high really makes you feel like king of the hill, doesn't it? 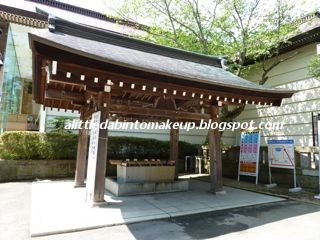 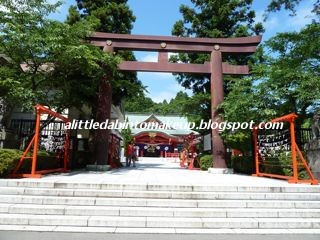 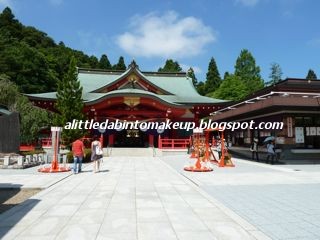 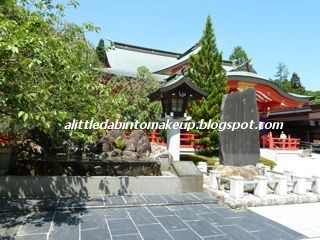 In the left photo is the statue of Date Masamune, the feudal lord who built the castle. If this name sounds familiar to you, it is probably because you've either been exposed to the Sengoku Basara game or the anime, in which Date Masamune is one of the 2 main protagonists. In the right photo is remnants of the main castle's wall. It was beautifully sunny that day, however instead of having a nice and green garden at the top of the hill they paved the whole over with cement. The result is a scorching and blinding view platform that literally gave me a headache because it was reflecting so much of the heat and the light. 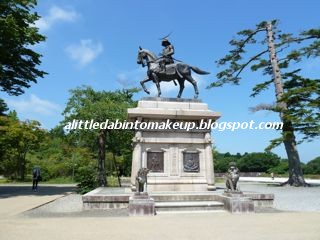 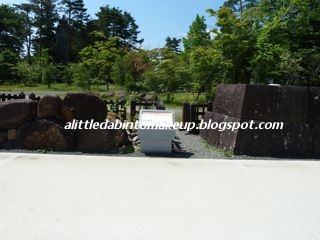 Anyway, after the brief stop at Aoba castle, we moved on to Iwate. The view of the Japanese countryside is just gorgeous. So lush and green versus the sea of concrete that makes up the suburbs and metropolis that is Sendai, Tokyo, etc. 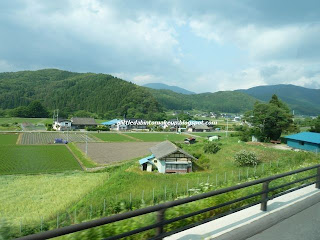 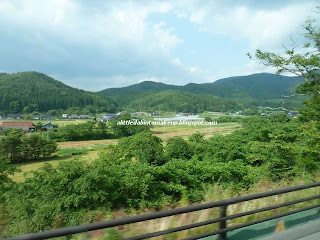 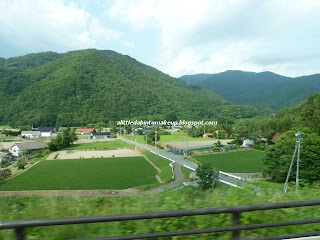 ...And then we arrived at Kamaishi, a steel producing town along the Sanriku coast of Iwate. 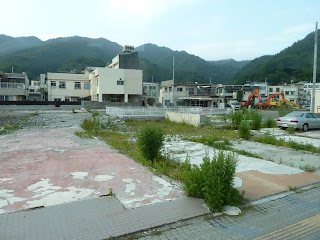 This area used to be considered downtown Kamaishi. 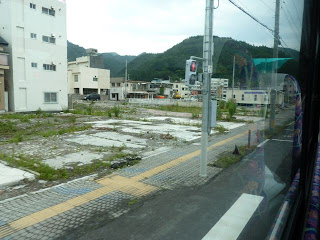 Yes, the tsunami came that far inland and destroyed much of the city. 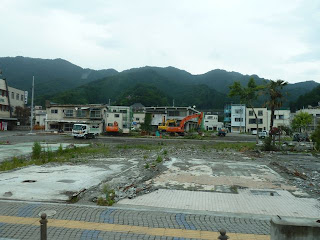 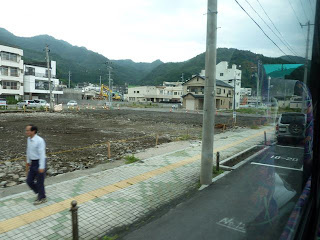 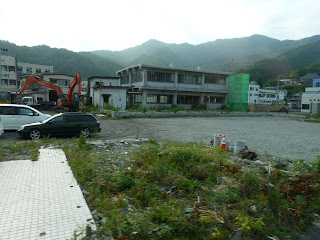 We drove through the city out towards the coast. That upside down L structure on the far left is a breakwater. Kamaishi is "famous" (or infamous, depends on who you ask) for the Kamaishi Tsunami Protection Breakwater that is on the Guinness World Records for the deepest breakwater. It was built because Kamaishi has a history of tsunami, at the cost of $1.5 billions! 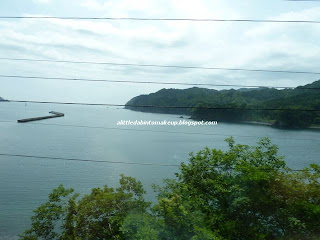 Did it work? I guess you can see the answer in these two giant mounds of debris. The current controversy revolves around the decision to rebuild the breakwater at the cost of another $650 millions. 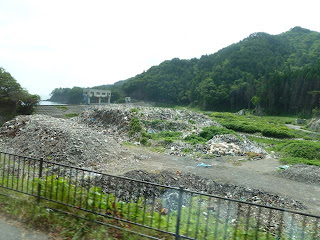 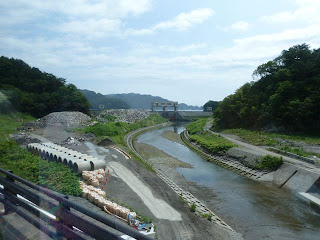 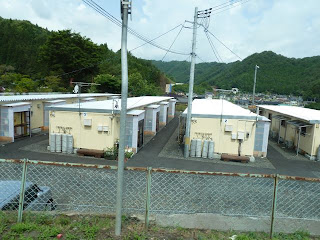 Because this became of their homes. 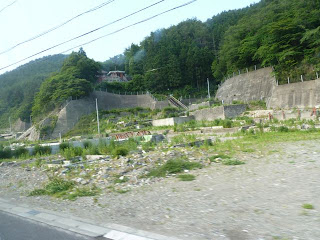 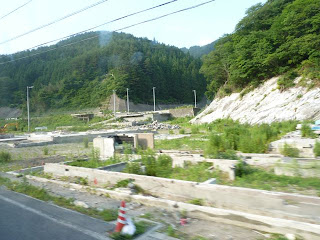 This is the site of the coast. 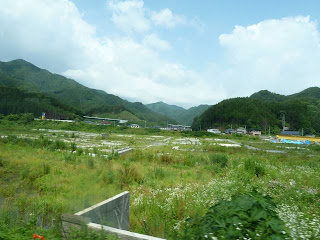 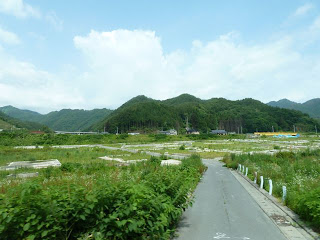 This was the sight of Kamaishi-Higashi Junior High School. Along with a nearby Unosumai Elementary School, they are a survival story usually told in perspective to Ishinomaki's Ookawa Elementary School tragedy. In this case, the teachers initially thought they would be safe at the roof of the school and it was actually the students who convinced them otherwise. Along with the elementary students, they all fled to the higher hills behind the school and everyone survived. 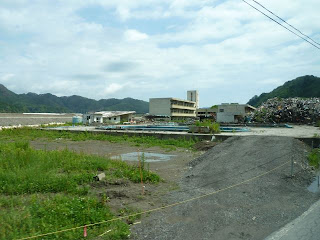 What happened to the school building? It was completely submerged, all three floors! Only recently did they remove a car that was deposited on the roof of the school. When we stopped by here, there were still workers clearing debris and throwing them over the roof top. 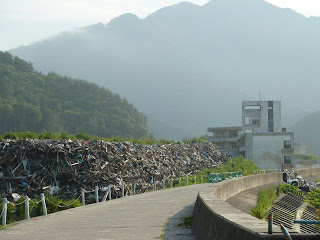 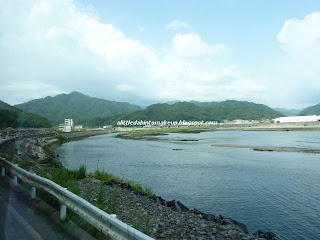 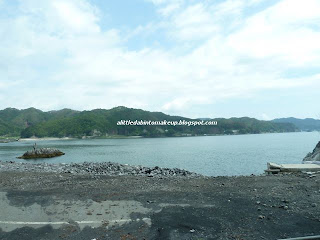 Just look at how beautiful this coast is! 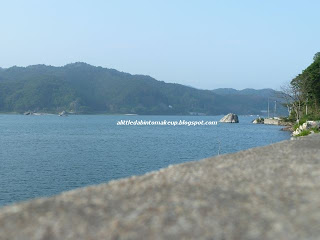 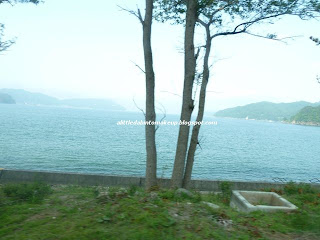