I thought I'd end the month of July with this post ^.^

This year, our neighborhood's Bon Odori (Obon Festival) was on the last weekend of July, 2 weeks later than last year's. Hubby actually saw a flier advertising it this time, so it didn't catch us by surprise like it did last time. We went out there pretty early, about 30 minutes after it had started and the lines for snacks and drinks (yakitori, yakisoba, hot dogs, beer, shaved ice, etc.) were already out the park's gate!

Watch a video I took of the festivity while standing in line for yakisoba ^.^ 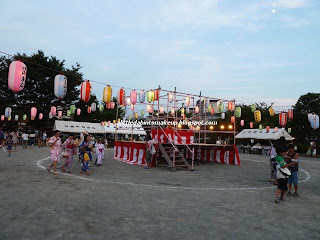 I'd say this year's Bon Odori was much more lively than last year, which was a bit more solemn due to the earthquake and tsunami occurring just a few months back. Lot of kids were running around, kicking up a storm of dust but no one minded, except perhaps those who were eating ^.^' Watch this video I took of the opening dance. 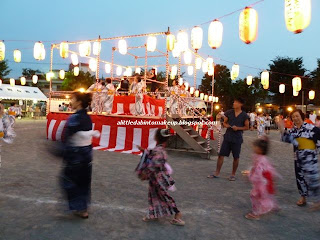 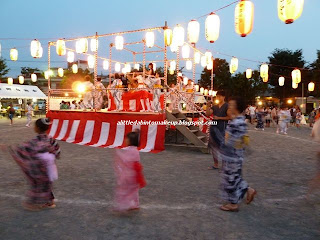 And of course, I wouldn't miss the children's dance. 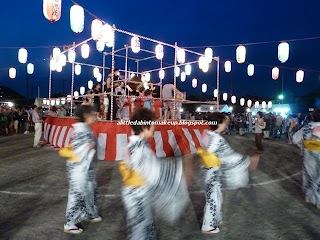 This year, in my humble opinion the highlight of the festival was an unscripted showdown by a large group of 15-20 genki middle school boys who joined in with the dance on the side. They were so into it, perhaps as a joke, but it was still hilarious all the same. They even got the neighborhood drunk (the dude in the straw hat holding a fan) to join in LOL! At around the 1:55s mark, a woman ran up to one of the boys and told them all to go dance on the stage, which they did for the next song. How funny is that? Fashionable? Yes. Too cool for folk dance? I think not! Honest good fun never goes out of fashion if you ask me! I'm going to miss living in Japan dearly for times like these... T.T 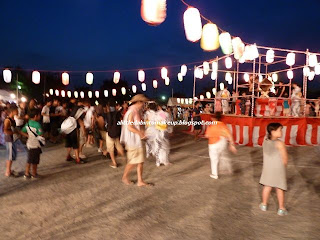