I ran out of the 80g Nivea Sun Protect Water Gel SPF30 PA++ bottle a couple of weeks ago and moved on to this 2012 reformulation of the Skin Aqua UV Moisture Gel I started using in 2009.

This new formula marks an important change in the sunscreen, making it photostable in addition to offering slightly better protection with SPF32 and PA+++ (the old formula had SPF27 and PA++). Supposedly, the feel of the sunscreen changed as well, and the big round sticker on the lower half of the outer packaging gasps, "It's just like lotion!" By lotion they meant toner, and remember that Asian made toners are seldom runny water but instead more viscous like a runny gel. The hygienic and nicely sized 150g pump bottle supposedly retails for 1,260yen and the 130g refill pouch 1,050yen, but you can get it for cheaper. I got mine for 945yen and 745yen, respectively, and I'm sure some places have them for even cheaper. 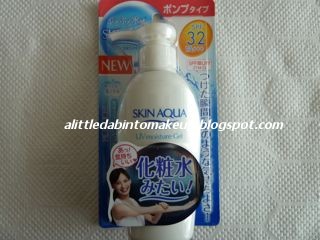 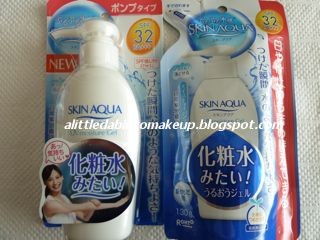 I can definitely tell the difference with this reformulation, even if the sunscreen itself looks virtually unchanged - it's still an unscented skim milk-like runny gel. First off, the alcohol content isn't as strong. It's definitely there, but it isn't as dominant as it was with the older, now discontinued, formulation. I use it exclusively on my body anyway (neck, decolletage, upper chest, arms, legs, feet), so the alcohol isn't an issue here. Secondly, it seems to melt in my hands. It pumps out a milky runny gel and quickly melts into a viscous lotion-like liquid, so the claim of it being just like lotion (toner) isn't that far off at all! 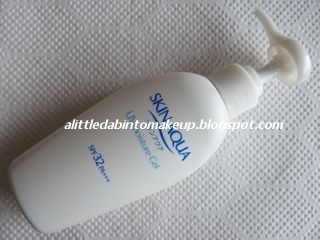 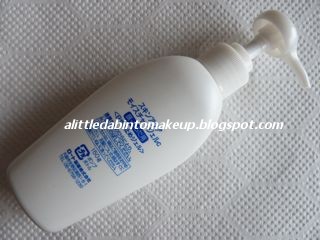 Last and not least, it dries even faster than the old formulation and is much less sticky in humidity, though I have to say it still couldn't beat Nivea Sun Protect Water Gel SPF30 PA++ in this department. Hubby really liked the Nivea Water Gel and he said he couldn't tell the difference with this Moisture Gel. I could, but will happily overlook it since it does offer slightly better protection than Nivea. At least it's not as sticky as the old formulation gets with humidity, as if sweating profusely didn't make me sticky enough already. Yuck. So yes, this reformulation is definitely a welcomed change.

For comparison, see my review for an older and now-discontinued formulation, the Skin Aqua UV Moisture Gel SPF27 PA++.
Posted by D. at Friday, August 10, 2012

Something to check out when I run out of my body sunscreen. Thanks for the review!

You're welcome :) Thanks for reading!

This reformulation is great, and cheap too! My older pump bottle lasted me 3+ months, which is awesome considering I apply a liberal amount every time.

hi! where do you live and where did you buy this product from?

This sunscreen is available online. Please my "where to buy" tab.