I hrmm and hrrh over this Lunasol Party Coffret 2014 for a long time. Previous sets almost always include a mascara which I don't use (sparse + short lashes = why bother?), while this one has an eyeliner, a clear gloss that's supposedly moisturizing, and a powder, all in addition to the main attraction of the eye palette. But still I wavered back and forth, that was, until I found it on Rakuten for 7,589JPY (about USD61) after tax and shipping. In comparison, the cheapest I've seen is $89 at Adam Beauty before shipping. So into my cart it went ^.^ And I'm so happy I gave it a chance. 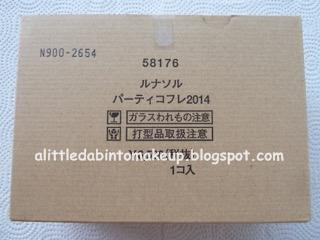 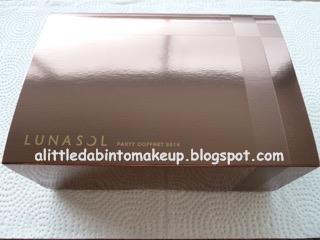 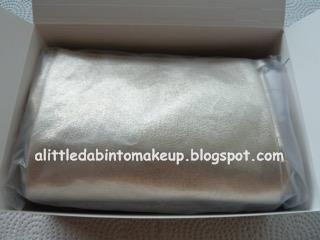 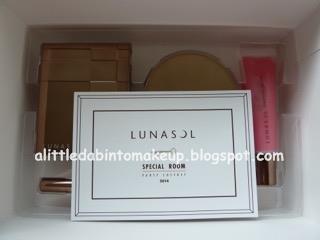 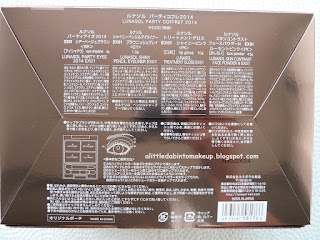 The set arrived still in its manufacturer's carton. Inside, there was the featured Party Eyes 2014 EX01, Shiny Pencil Eyeliner EX01, Treatment Gloss EX01, Skin Contrast Face Powder 4.5g, and a sparkly zipper pouch that I don't much care for :P 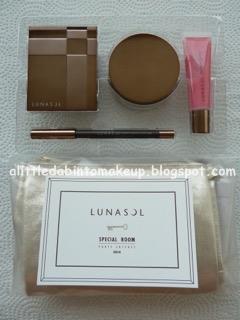 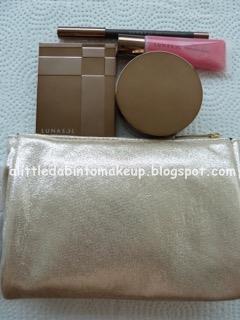 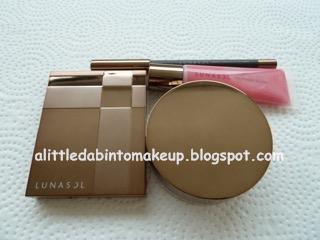 - Party Eyes 2014 EX01: yes, even more taupe, what can I say? I just tend to gravitate towards these colors and I haven't gotten tired of them. Yet ^.^ May be one of these days I will, but for now I just can't have enough. This particular taupe palette is pink-toned and gold-accented. And OMG, that buttery texture that I went totally crazy for in Vivid Clear Eyes is back!!! *happy dance* Pigmentation is great, not as excellent as Vivid Clear Eyes but still pretty good. There's only one semi metallic with the rest being shimmery, but I'm actually okay with that as all the colors work surprisingly well together. In fact, I like this palette better than both the 15th Anniversary Summer Eyes and the Lighting For Eyes, even though there's seemingly nothing special color-wise. 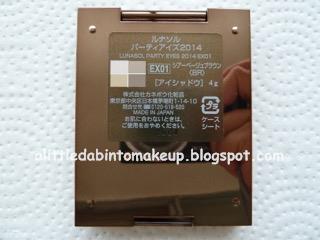 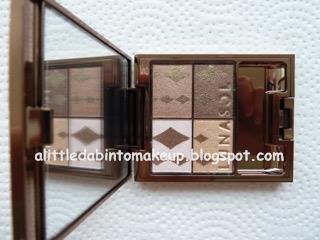 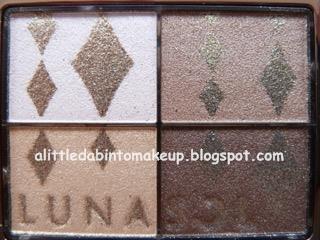 Clockwise from top left:
- Base/highlighter: shimmer, low intensity. A whisper pink that applies pretty much a pink-tinted white. This color has micro shimmers so fine the shade applies with a subtle pearly sheen.
- Medium crease: semi metallic, medium intensity. A pink-tinted taupe with a glistening wet semi metallic sheen. So pretty!
- Liner: shimmer, high intensity. A chocolate with gold and pink shimmers. Also very pretty even if it's not dark enough for me for the upper lash line. But that's where the eyeliner in this party coffret comes in handy ^.^
- Lid/sparkling top wash: high shimmer, low intensity. A lovely 14K gold. This is technically a sparkling top wash but it's more pigmented than your average super sheer translucent washes. It's very sparkly, yes, but the shimmers aren't garish glittery or chunky, so it can double for a lid shade. In fact, the instructions say to apply this shade all over the lid, blending upwards to soften any harsh lines. Then apply the pink-tinted taupe below the crease.
- Glittery overspray: just a special mentioning for the antique gold overspray that I use as a sparkling top wash. I even swatched it below (far left on the wrist). Picking it up is a bit tricky, but with the right brush (Hakuhodo J122R or J125R) it's gorgeous! 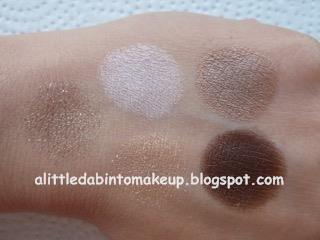 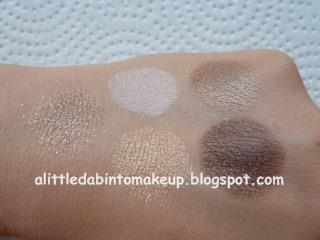 - Shiny Pencil Eyeliner EX01: A grayish taupe brown with silver shimmers, pretty much a shimmery version of my favorite Clinique Kohl Shaper for Eyes in 03 Blackened Taupe, a color so beautiful and versatile but sadly discontinued. So I can't tell you how happy I am to have received this Lunasol eyeliner. The eyeliner itself is very smooth and creamy, though somewhat thicker than the usually melty buttery texture from Stila Smudge Stick or Pixi Endless Silky. I still love it though! 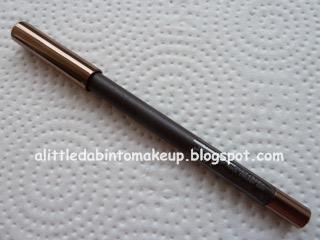 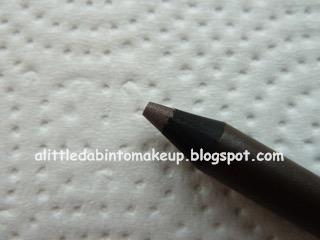 - Treatment Gloss EX01: a pink-in-the-tube but ultimately clear gloss with scattered gold shimmers. It feels identical to Lancome Juicy Tubes to me, thick, smooth, and moisturizing, all without the hit-n-miss scent that was the very reason I quit Juicy Tubes. This Lunasol gloss is unscented. It's not sticky at all, not to me at least, and it lasts for several hours on my lips with water sipping every now and then. Did I mention it's moisturizing? It now lives in my bag and I love it ^.^ 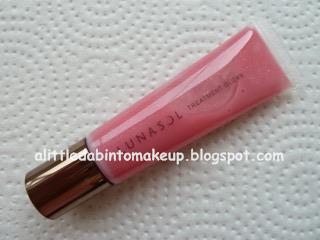 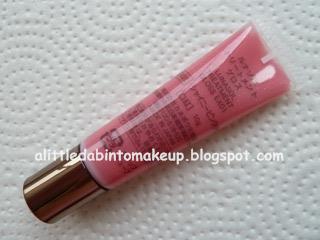 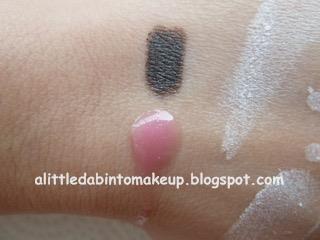 - Skin Contrast Face Powder: I thought this was a pink-tinted finishing powder but it turns out to be a highlighter instead. I learned it the hard way, actually, having dusted it all over my face as the finishing touch after makeup, only to turn rather shiny a couple of hours later. Granted it was a warm afternoon, but this powder has extremely fine shimmers I didn't even notice until sunlight hit my face directly, at which point I lit up like a disco ball. Nothing a sheet of Boscia Blotting Linen couldn't fix but it was still a bit of a surprise ^.^ 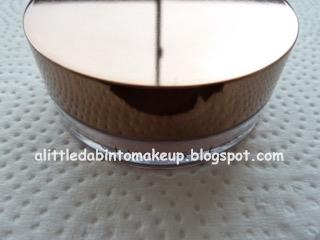 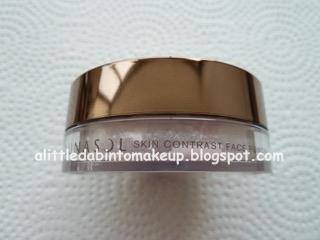 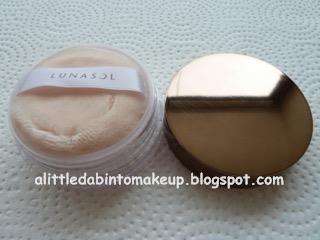 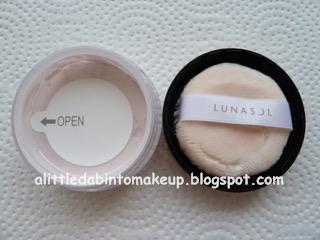 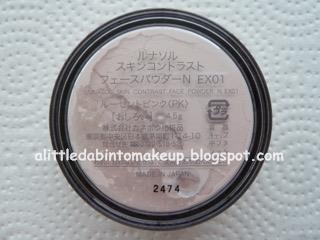 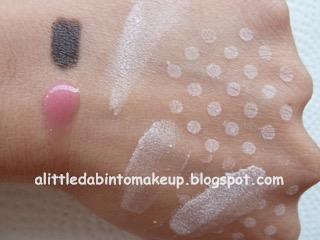