Happy Holidays everyone!!! I'm home visiting my folks for the rest of this month so posting will be sporadic until I get back. Keep warm (unless you're in the Southern hemisphere, in that case, keep cool!) and take care!
Anyway, this bottle of Naive Makeup Cleansing Oil actually says "cleansing oil for use in bathtubs." I think that pretty much sums up this cleansing oil, yep, it can be used dry or wet! I spotted this newbie a few months ago when it first came out. At the time I was still using Hada Labo Super Hydrating Olive Oil Cleansing, but I bought it anyway and have been using it now for the past month. And it was cheap so that helped ^.^ 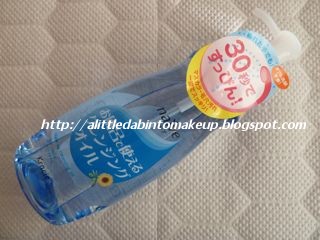 This oil cleanser a very mild fragrance that I don't notice anymore. Also, I was expecting it to be more silicon-y but it's not. It actually feels a tad thicker than the Hada Labo oil cleanser, and it rinses better and cleaner. That said, it's also a bit more drying, as my skin felt a little tight afterwards, though that might just be the fact that it's winter right now and my skin is just super dry. 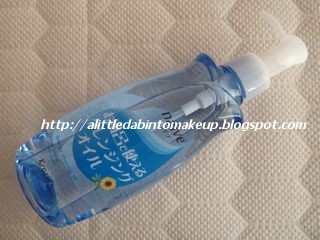 I have also tried using this wet, as in while taking a shower wet, of course because I'm skeptical ^.^ It's not like I haven't used a wet/dry cleansing oil before, I have, with DHC Mild Cleansing Oil, but this DHC cleanser didn't look or feel like a typical oil cleanser whereas this Naive one does. A typical oil cleanser will loose its effectiveness when water is introduced, so for example, if my face is damp or my hand is wet, the oil cleanser will immediate turns cloudy and starts to melt off. To my surprise, this didn't turn cloudy with water. Its thick and oily texture remained intact even with my hands and face wet, which was really weird, especially since after massaging my face I splashed the cleanser off with, well, water! Here's the oddest part, the cleanser doesn't rinse as well when used wet as it does when used dry. When used wet, it leaves a slight film, which makes me think it didn't remove my sunscreen completely.

Yeah, so now I'm completely boggled as to how the heck this thing works! That means I will be sticking with the dry use unless in the rare circumstances that I forget to take my sunscreen off before starting my shower. It's not a bad cleanser I guess, but I won't be buying it again, only because there are so many choices out there and I want to keep exploring ^.^
Posted by D. at Tuesday, December 20, 2011