Boy is this review so very late. Good thing this sunscreen is still available. Despite the repackaging in 2017, the formulation hasn't changed as far as I know.

Anyway, back in 2016 when hubby and I were still in Tokyo, I gave this 50g tube of Skin Aqua SaraFit UV Sara Sara Essence PSF50+ PA++++ to him after he poo-pooed Nivea Sun Protect Plus UV Creamy UV Essence, disliking its soft matte finish and how it felt "waterproof" (it wasn't...). 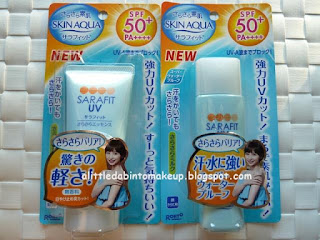 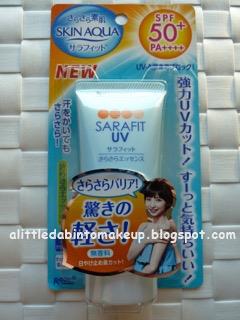 Turned out he didn't like this SaraFit UV Essence either. He said it was much thicker than the Nivea Creamy UV Essence, and it left his face too shiny. So I tried it myself and sure enough, it was just like any other professed sunscreen "essences" or "gels" that are in squeeze tubes (versus those in bottles that are "actual" gels and are much better I think). It was thick, greasy, and it left my face shinier than if I'd slathered on some cork grease. Nope. Nope. Nope. 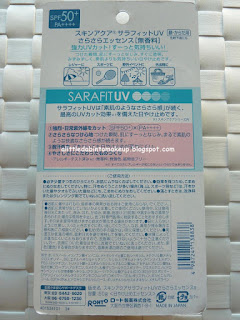 I didn't give up on the stuff though. For what it was worth, this was a chemical sunscreen with octinoxate (メトキシケイヒ酸エチルヘキシル), Uvinul A Plus (ジエチルアミノヒドロキシベンゾイル安息香酸ヘキシル), and Tinosorb S (ビスエチルヘキシルオキシフェノールメトキシフェニルトリアジン), not a bad combo. In addition, I actually had bought a duplicate by accident and so was stuck with one full and one mostly full tube to use up one way or another.

So I have been: they've been among my arsenal of sunscreens for mixing for these past few years, with mostly meh results. And by "meh" I mean the cocktails ended up being just as thick and pasty as the original products and/or didn't leave a decent finish that I could leave the house with. It was only recently that I found this to work okay with Skin Aqua Tone Up UV Essence SPF50+ PA++++ (will review next). So yeah, once I'm through with this last tube I won't repurchase. 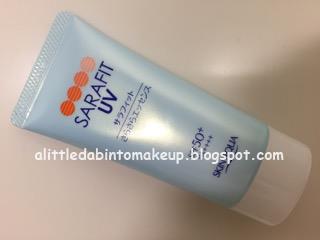 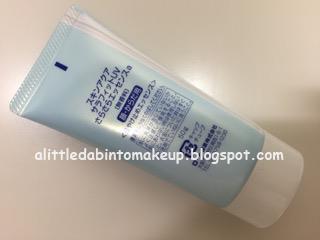 ha you know a product is old when it has akb48 member on the sticker(look how flopped it is now). I am so put off by greasy sunscreen (that I slacked off a lot during summer and ended up with bunch of spots, oops).

Oh is that AKB48? I thought it was just some random chick LOL!

I've been kind of lazy these days too. A few times a week I'd skip sunscreen. May be I should just be like hubby and put on some easy-on-easy-off stuff or puff on some sunscreen powder and call it a day. Something is better than nothing.