Within the past couple of months, some things have happened back at home which leads to the difficult decision that hubby and I would need to return to the US of A first instead of going straight to Taipei as we originally planned. So knowing hubby and I would be leaving Japan in a couple of months, somehow my sister has tricked me into becoming her shopping assistant and my apartment her personal warehouse to which she sends all her otaku collector items ^.^' Hubby has jokingly worried that the mailman thinks he's a creepy gaijin otaku because he's always home when the packages show up LOL! As for myself, I've been running all about town to supply her of candies, dry foods, skincare, sunscreens, and soaps. So while I'm at it, I might as well share with you some of my favorite Japanese candies ^.^

These Kishiri Crystals are "throat candies" aren't meant to be candy candies. However, they're so yummy they might as well be. You know how Ricola is supposed to be a cough drop but it's so mild it's not really effective as a cough drop? These are much much milder than Ricola, so mild they taste like a minty milk candy that is quite delicious! While at Don Quixote one day I found a super sized bag for the original Milk Mint flavor (blue bag) as well as the special Peach Mint (pink bag) flavor. I haven't tried the peach mints yet, but I'm pretty sure I won't hate it. 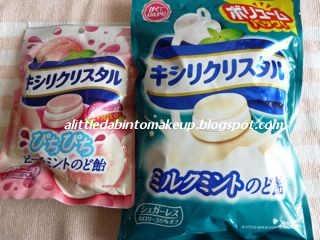 Also popular in Japan are "shio ame," which is salted candies, candies that are sweet and salty. Have you ever eaten a Chinese candy that is domed and clear with a dry preserved salty-sour plum in the middle? I love these plum candies (and salted caramel and sea salt in chocolate as well!), so the shio ame in Japan are also a huge hit for me. In my sister's case, for some reason it the salty sweet combination really helps her with motion sickness or car sickness, so she sent me on a mission to find her favorite Japanese shio ame because her supply at home had ran out.

A version of the Chinese preserved plum candy sold in Japan. 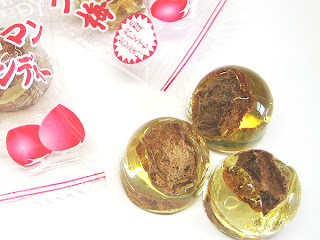 Most shio ame in Japan comes in citrus and ume (plum) flavor, depends on the season. A couple of months ago, this Yuzu Shio Ame (left bag) were sold widely, but now it takes me several stores to find this specific brand that I like. Right now, the more readily available flavor is lemon, but I also found these grapefruit and lime ones that are really yummy. 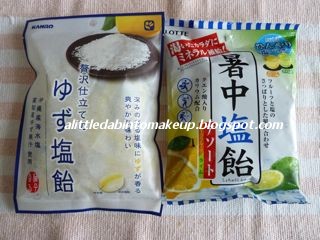 And after going to a dozen store, I finally found my sister's favorite Nama Shio Ame (Fresh Salt Candy) in Lemon flavor. I've had these before and like them as well, so I bought a couple of bags for myself too. ^.^ Mean while, my sister is going nuts, asking for 10 bags O.o She also wants a specific brand of ume candy, which I haven't been able to find at all and thus suspect that it's seasonal. Can't help you there, sistah :P 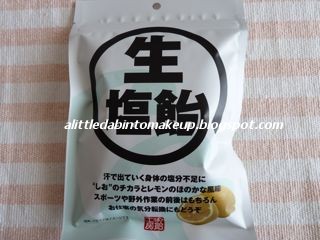 Hi, I have been searching for these milky mint candies ever since a friend gave me one after lunch one day. I'm addicted. But of course, it's hard to find international candy when you can't remotely decipher the language on the packaging. WHERE DID YOU FIND THESE!? Thank you for keeping a blog!

Hi, I have been searching for these milky minty Japanese candies ever since a friend gave me one after lunch one day. I was addicted. But no search will ever be fruitful if you can't decipher the language on the packaging. Did you find these in the U.S.? Where? Yes, it's possible I will pay you to mail me some... it's that bad. P.S. how were the peach ones?

This post was written before I moved home to the US of A, so I found these candies in...Japan ^.^

Have you tried googling "Japanese candies"? There are a few monthly subscription services (first 2 results!) that will send you Japanese candies straight from Japan. Perhaps you may be able to request Kishiri Crystals since it's a rather common throat candy.

Hi I have been searching for the plum candy for at least 8 months. I have tried china town in San Francisco as well as in Oakland put have come up short. If you know of a store that carries them please send me an email @ girlfrend43062@yahoo.com

Have you tried Japantown in San Francisco, or any other Japanese supermarket (there are a few in Oakland also)?

If you're searching for Japanese plum candies, it's best to look for them in Japanese supermarkets. There is a Nijiya in San Francisco's Japantown (Post & Webster). I have seen many plum candies sold there!