The Tokyu Hands branch I'd been to was rather small, because despite having 6 floors and 2 basement floors further divided into half-floors (for example, floor 1A is one flight of stair from floor 1B), each actual floor was only the size of a single shop and it wasn't a sprawling department store in any sense. Still, there were 2 whole floors (that's 4 halves) dedicated to all things stationary! It was among the several aisles of cute and sparkly stickers that hubby and I found these hysterically funny ones. We were going through and read them one by one, giggling like nut jobs and contributing to the inflammatory stereotype here that foreigners are mostly weird, crazy, suspicious, etc.

The Japanese says, "Aim right!" Damn right! They ought to put one of these stickers in every public bathrooms, for all the guys and gals who are disgusting enough to not clean up after themselves. 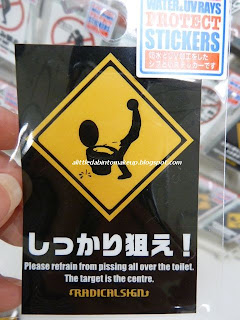 Similarly to the English, the Japanese says, "I cannot bear it anymore..." What I can't really tell is whether the puppy is drooling or puking. Poor thing. 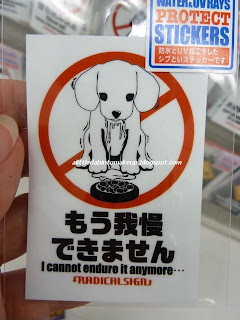 Another close translation, the Japanese says, "There is no medicine for stupidity." 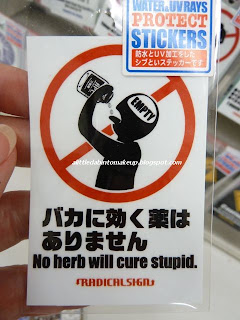 The Japanese text is a saying something along the line of, "just stick with it," "ride it out to the end", or, "hang in there" ^.^ Though I do wonder if anyone would really take this advice and strike this pose LOL! 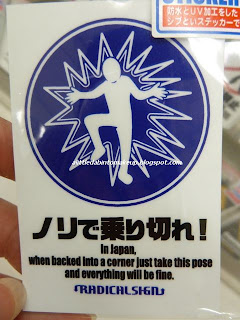 The Japanese says, "I don't want to become, like, an adult or something!" 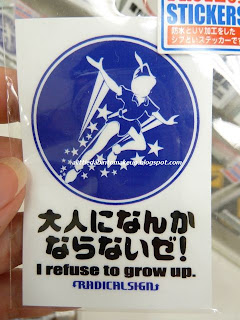 The Japanese says, "Whatever it is, I pay it back two fold." Totally unfair, since that huge hammer looks a whole order of magnitude bigger! 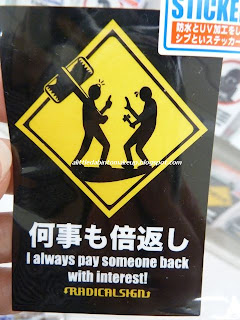