Even though I don't go to class everyday anymore, I'm still looking forward to any excuse to use these Excel Shiny Shadows ^.^ They are sparkly top washes with mega bling! 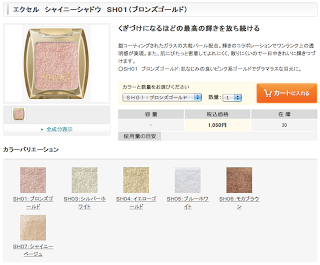 There used to be 7 colors available, but SH02 (a pretty blue green) has been discontinued so I definitely missed out on that one. As a whole, these are pigmented, intensely metallic, and are extremely sparkly.
Due to all the shimmers they're not as soft and smooth like their sister Glossy Shadows, however in comparison to the vast majority of the sparkly top washes out there, they are far more superior in both texture and pigmentation. Right after swatching these, I hopped up and dug out my Makemania Sparkle Glitter Eye Shadow for a side by side comparison. Believe it or not the first three SH01 Bronze Gold, SH03 Silver White, and SH04 Yellow Gold beat the Makemania shadows in all 4 counts, pigmentation, metallicity, sparkliness, as well as texture! I didn't think that was possible, but hey, check the comparison swatches and see for yourself! If anything, the Makemania swatches appear dull next to the first three Shiny Shadows! The later three, SH05 Blue White, SH06 Mocha Brown, and SH07 Shiny Beige, are comparable to Makemania. While I'm not sure why there is a difference between the former and the later threes, it's still pretty damn good and so I won't complain ^.^


- SH01 Bronze Gold: metallic, high shimmer, medium pigmentation. A gorgeous metallic peach with gold shimmers. However, the peach is not entirely golden, it's a little pinkish even, and I don't see any bronze at all! I thought it would be similar to Makemania BR (Brown), but it's obviously peach while Makemania BR (Brown) is definitely bronze with some copper. 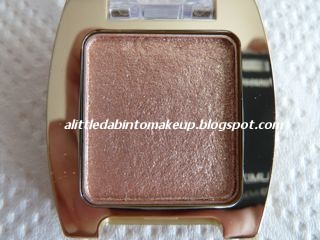 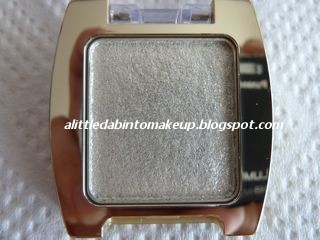 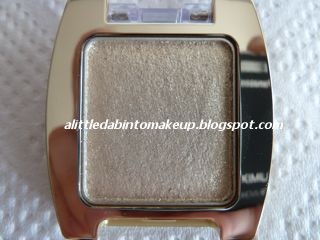 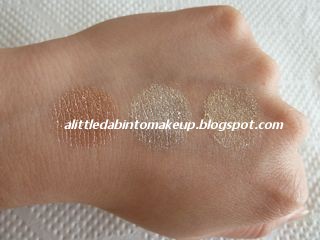 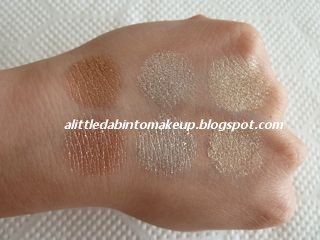 - SH05 Blue White: metallic, high shimmer, medium pigmentation. An ashen grayish silver. I see neither any white or blue in the swatch by itself, however when I compare it with SH03 Silver White, the white and blue becomes more apparent. Anyway, it's a tad more translucent than the rest, but still pigmented nonetheless. 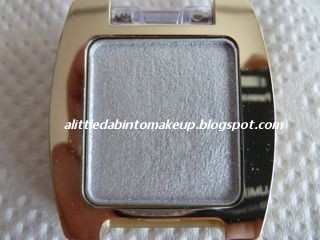 - SH06 Mocha Brown: metallic, high shimmer, medium pigmentation. Woh, this one threw me in for a loop. It's a warm mocha brown indeed and it's way too dark for a top wash. Perhaps this is a crease shade, and a super sparkly one too! 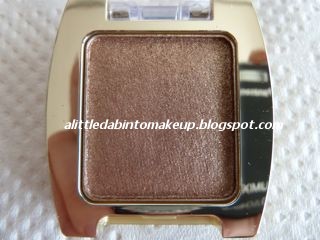 - SH07 Shiny Beige: metallic, high shimmer, medium pigmentation. More like a golden marzipan to me! The Makemania BR (Brown) looks like a cross between SH06 Mocha Brown and this color! Mean while, SH01 Bronze Gold is still obviously peach ^.^ 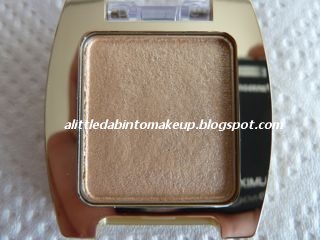 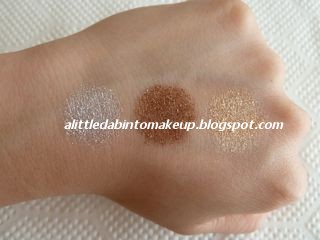 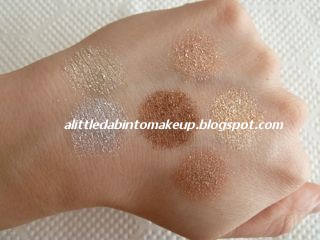 While at it, I thought might as well swatch both the Glossy and Shiny Shadows just to show you that they are very indeed different. See how much smoother than Glossy Shadows are? 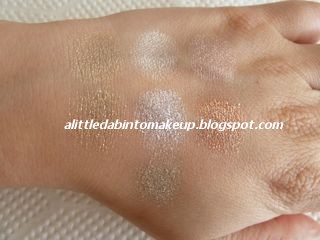