Arisan Taiwanese Restaurant is rather well tucked away in an alley outside of Sakuragicho Station's back entrance, the one that leads away from downtown Minato Mirai. Hubby and I didn't find this place ourselves. A classmate of hubby lives near the area and told us about it.

This water spinach sauteed with garlic (left) totally impressed us, but the cold spicy cucumber was only okay. 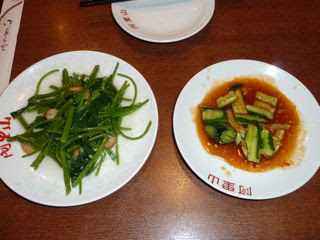 Overall, the food at Arisan is good, though there wasn't anything that stood out to us as "Taiwanese." Not that hubby and I would know, but I'm sure somebody will bite my head off and curse several generations of my family (hey, it's the Asian way) if I were to claim that Taiwanese food is just like "Chinese" food. In short, the dishes we had at Arisan were pretty standard "Chinese" fares, could very well be because we ordered the standard Chinese fares. But even then, there were a couple of misses among the several dishes we ordered, some were clearly better than others. We would probably come here for dinner again. Arisa has a huge menu and several dishes weren't really a fair trial xD

Gyoza (pan fried dumplings) were good, but you just can't go wrong with gyoza in Japan, so this dish doesn't count :P 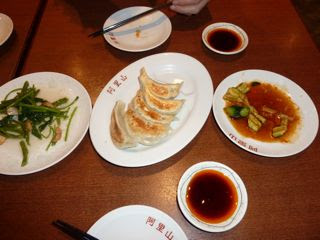 I really liked this stir fried shiitake and bokchoy dish, although they used the dried Chinese shiitake instead of the fresh ones, so the mushroom came off a bit too strong and hubby didn't enjoy this dish as much as I did. 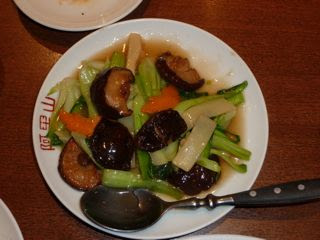 I forgot the name of this dish but it was a hit for us and the first dish we cleared out ^.^ It was pork and vegetable stir fry. 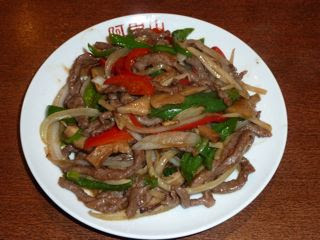 I forgot the name of this dish too, but it was pork, looks like charsiu but wasn't. Came with fine seasoned salt. 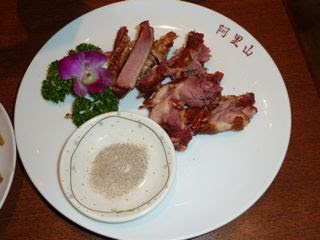 Shrimp in Chili Sauce. This was so so, nothing impressive. 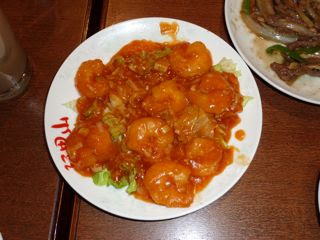 Twice Cooked Pork, it was good, but the pork were actually the belly cut, aka bacon. So yeah, it was quite fatty. 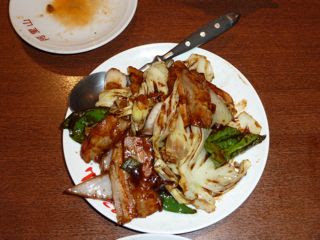 I hated this dish. It was supposed to be Kungpao Chicken, but I think one of the cooks accidentally spilled a bottle of vinegar in it because, eeeps, it was sour!!! 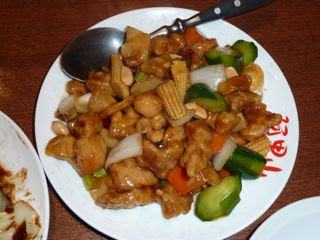