...Because I can't go see and swatch this Lunasol 2016 Party Coffret myself anymore T.T *sniff* so I scoured the web for pictures of them and hoped to find some swatches. I did find some, so I thought I'd share them with you :) 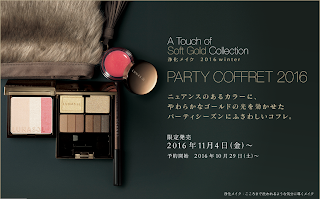 
Here are a few less-produced photos. Follow the links below to see even more photos and read Cosme.net reviews (all in Japanese). Sometimes, some reviewers will also post candid photos of the items and swatches. 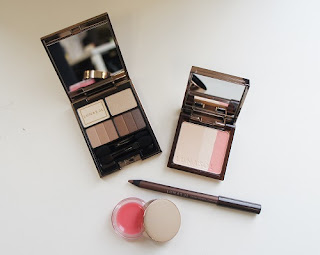 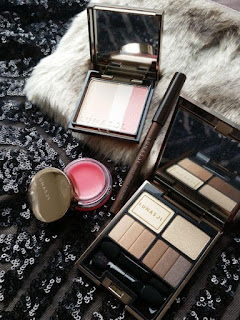 I'm most interested in the Party Eyes palette but it looks almost identical to the Shinjuku Isetan exclusive of the Feathery Smoky Eyes (which I will get to reviewing eventually, I promise). Actually, from the swatches below, it appears more neutral but less sparkly. Boo. Hiss. I like my sparkles! 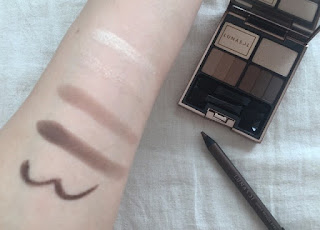 ***Photo from this 4meee! review (in Japanese). Follow the link for even more photos.

So it's safe to say I'll pass on this 2016 Party Coffret. I don't need a dupe of a palette I already have and love. I have enough powder blushes and lip balms to last a lifetime, and better ones too! I'm not going to bother with the eyeliner, especially when I have backups of Three Flash Performance pencils. That's not to mention J. just got me into Tarte SmolderEyes Amazonian Clay pencils, which I might not get around to photographing and reviewing until next year. So yeah, I'm all set with eyeliners. And I definitely don't want anything to do with that furry pouch LOL!

I decided to pass on it too. I did order the eyeliners and cream blush from the holiday collection being released separately. I can't recall, did you ever check out the 2015 coffret? I randomly picked it up when Imomoko was doing their anniversary sale and I was surprised at how much I enjoy the quad! It has this lovely beige-champagne sparkly shade that's fantastic.

I did check out the 2015 Party Coffret (but didn't post the swatches, which I should have!). I liked the sparkly beige-champagne but hated that the deep color was matte :(

I'll be passing on Addiction's Holiday Winter White set for the same reason, because 2/4 shades in the featuring palette are matte as well. I guess matte eye shadows are in vogue nowadays. Oh well. I'll just wait for the sparkles to come back ^.^

If you want sparkles Suqqu is coming out with a new quad range. I saw the pictures on Instagram and its shine city. Tbh they kinda look like Lunasol palettes. I really want to see how they swatch.

Oh interesting! I saw the Suqqu UK instagram with the new EX35 and EX36, but each seems to have 2 matte pans. Where did you see shine city? I want!

Oops, I should have been a little more specific. Suqqu is coming out with a new line of quads called Designing Color Eyes for Spring 2017 (5 permanent, 1 LE). Looks like they come in gold cases the way the new blushes do instead of the old solid black casing. Here's a few links to some of the pics on IG:

You can really see the iridescence in the mirror reflection - https://www.instagram.com/p/BMUDJnmjusz/?tagged=suqqu

Not a matte to be found!

I'm eyeing the quad that has the orange/brown/purple combo and the lilac/green/brown one. Ironically now that you're back in America it's actually cheaper to buy Suqqu from Selfridges.

My oh my those are gorgeous! I'm actually eyeing 4/5 of them :X

But you're right, I'll wait until they arrive at Selfridges--another reader, Karen, told me the exact same thing, that the GBP is very weak against the dollar now and I can get Suqqu stuff for much much cheaper than I could in Japan.

Thanks so much for telling me about these quads! Now I'm super excited :D

I have Selfridges+ and love it! Absolutely pays for itself. I can't believe the day has come when you can get a Suqqu quad for under $50. The new Extra Glow lipsticks are now under $25.

I know, right? Is that why ALL the colors are out of stock?!? LOL!

Great to know you love Selfridges+. Should I bite now rather than wait for them to waive the international delivery fee? Hmmm...

I say go ahead and just get it now. The new spring collection won't be out until end of January and by then the offer will probably have ended. Plus I'd bet everything is going to get cleaned out during the free delivery period. I do know that Suqqu UK is planning on restocking the EGL mid November, I asked them on IG.

Oh! I would like to try some of those EGL ones and was wondering when they'll restock those! Thanks so much for telling me ^.^ You're the best!

No problem! Your blog has been so helpful to me over the years. :) In case you were curious about the EGL colors I currently have two - 01 which is a beige with yellow undertones in a clear base. It's more or less identical to CGM in 11 so if you already have that you can skip EGL 01. I also have 10 which Suqqu describes as a pink-red but on me is more of a bright pink. To my eye it looks neutral with maybe a touch of coolness, also in a clear base. It really brightens my face when I'm too lazy to do full makeup. I think it'll make a beautiful spring color. It's the only color Selfridges has in stock at the moment iirc.

Oh I'm glad this blog is good for something :)

I actually don't have ANY Suqqu lippies because they've priced it out of my range. But as you say, now that I'm home, the dollar is doing better against the pound so why not? ^.^ I did pick up EGL in 10 Blooming Pink over the weekend with the Selfridge+ Global. Looking forward to playing with it!