Had these Lavshuca BB Lip Essence SPF21 PA+ since our Tokyo days but totally forgot to post about them. Woops. Actually, now that we're settling down a bit and I have some time to slowly unpack (still... =.=") and go through our things, I found I've neglected to post on a bunch of stuff even though I've been using them here and there. So you'll see more woops-I-forgot posts.

Anyway, this lip gloss generously comes with 8g of product and in two "colors," 01 Princess Pink and 02 Queen Red. 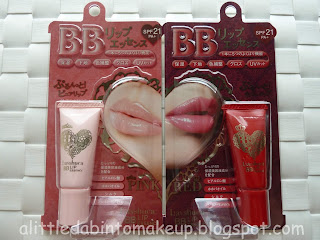 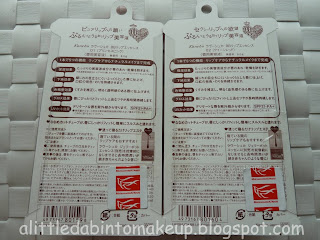 Ignore the "BB" in the name. I've no idea what it means and I really doubt Lavshuca has any clue either. I think "bb" was and perhaps still is a trendy term so they just slap it on everything, like "synergy." Even the photos on the packaging are misleading if not outright false advertisement as these provide no coverage whatsoever. 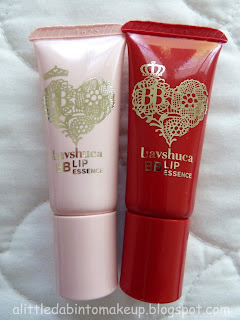 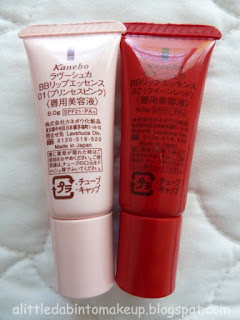 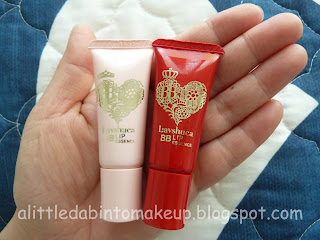 I picked these up solely to replace the Integrate Sakura Drop Essence tubes I had my gym bag and my travel backpack. I really don't know who copied who but they're really identical competing products, a supposedly moisturizing lip gloss with negligible sun protection. Even the colors-no-colors are nearly identical, a pinky-clear and a clear-red.

Unfortunately, their performance aren't identical and the Integrate version is better by a long mile. The Lavshuca counterparts are much thicker, and not in a good way. The formula is so goopy it'll leave a white ring around your mouth after a couple of hours. Ick. Even worse is that it's not really moisturizing. It's unscented though, versus the medicated menthol in the Integrate which I didn't mind a bit but perhaps some folks might.

- 01 Princess Pink: translucent with a hint of pink. Goes on my lips completely clear. The Integrate version is milkier with a pearly sheen. 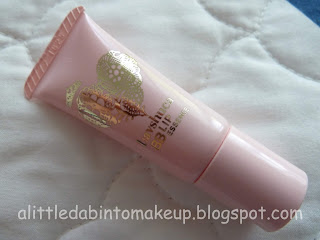 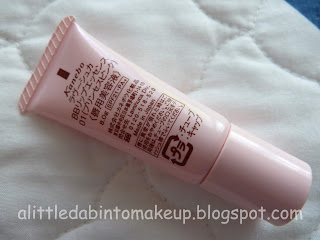 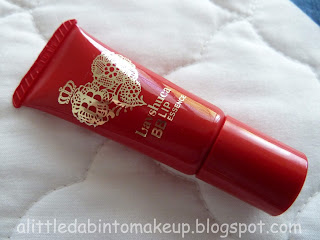 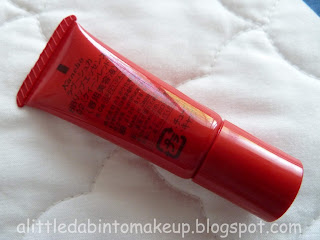 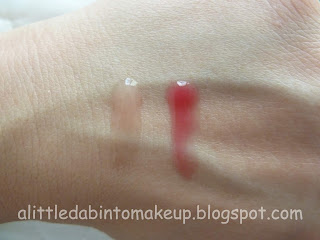 Since unpacking, I transferred both Lavshuca lippies to the organizer on my temporary desk and found myself reaching for everything else but them. One day, my little one climbed up my chair and promptly snatched the red tube while I wasn't looking. He wouldn't let go of it and took it with him into bed for the afternoon nap. I thought I'd closed that cap as tight as humanly could without breaking it, and yet he still woke up with the tube chewed up and uncapped. Red lip gloss was smeared all over his face, blanket, and crib mattress. You think a puppy is destructive for your tidy home? Try a toddler. Even more telling was that I felt zero sadness for the lippie's demise and was instead glad I now had an excuse to be rid of it. Don't recommend.
Posted by D. at Friday, November 02, 2018

Oh boy, I hope you got that stuff out of his bedding.
When did Lavshuca go out of production again? I miss some of their products, especially some lip and eye stuff.

Does Lavshuca still exist in Japan?
Anyway, you just gave me an inspiration on how to make my cat destroy my unwanted makeup stuffs..

Lavshuca as a brand ceased production at the end of 2015. Hubby and I got to Tokyo that summer when I got these lippies. I do miss some of their stuff, mostly the lipsticks and eye shadows before the pinky-bubblegum revamp the repulsed me more so than attract. I think they tried to re-establish and capture a younger crowd but failed miserably and shuttered. Too bad, right? I thought they were doing just fine before.

Oh, and the lip gloss washed out okay, thankfully! It was so funny when I came to get him after the nap. He woke up looking like he had snuck some strawberry jam into bed LOL

It does not, sadly. Kanebo discontinued the brand at the end of 2015.

Oh man, I want to laugh but at the same time I worry for your cat ^.^

Yeah, I didn't buy anything after their revamp. Maybe that's why they tanked?

Me too. I bought just a couple of things after the revamp. I didn't like the overly pink packaging at all :(