This is hubby's 2nd bday in Japan and we're celebrating it more quietly this time than we did last year. Hubby was still in school then, and all our friends and his classmates knew of his bday and insisted on celebrating. But of course, that was several different groups of friends, so we ended up celebrating several different times, each with a separate group. Hubby was very flattered, but in the end he was all partied out. So now that he's done with school and we don't see our friends and classmates everyday anymore, we decided to keep it quiet just between the two of us ^.^

We went out to lunch today to hubby's favorite Korean restaurant - Saikabo. Running into our neighbor S. on our way out, she offered to help snap a picture of us and we were happy to take her up on her offer. Despite the cloudy day appearance, it was actually sunny and we were both squinting because the sun was hitting directly at our eyes. Can you believe hubby and I have been together for a decade now? We have been married for over half that time. How time flies! 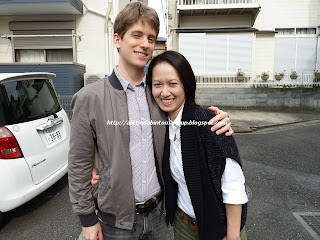 We went for a course lunch for two at Saikabo that came with a tofu and kimchee salad, an assortment of kimchee, stir fry noodles for appetizers, and Korean style sukiyaki to share, which we inhaled before I remember to take a picture, hence the emptied pot LOL! xD Then each person gets an individual portion of bibimbap, wakame soup, and tiny dessert in the form of a frozen strawberry stuffed with cream. Yep, it was a whole lot of food! 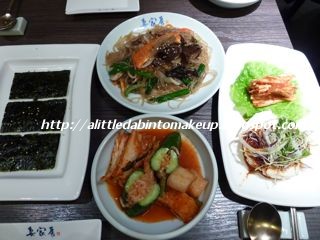 We were stuffed by the end of the meal and I could barely finish my bibimbap! 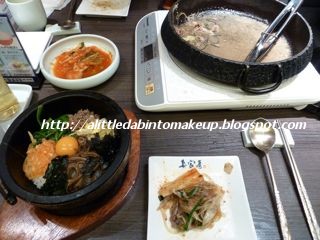 And the funny thing about some restaurants in Japan is that they don't allow take outs in fear of liability. So it's either you force yourself to eat all the food, or they'll be dumped out. I guess course meals like these are meant for big parties so that people can share. 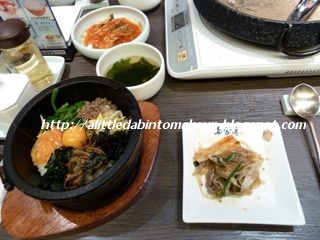 From my trip home in late September early October, I brought back some new clothes and shoes including some of my most favorite sweaters ever! This is one of them. It's an open front, sleeveless sweater that's meant to be worn as a light jacket. Being black with shimmery threads, it pretty much goes with everything and is a perfect layer for the current weather. 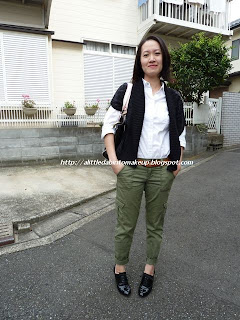 Anyway, speaking of weather, it's still shockingly warm here, unlike last year when I was wearing several layers before Halloween even arrived! It's almost a week into November now and the temperature is still hovering around mid-60's to mid-70's. It's supposed to get down to low-60's this week though, so we'll see.
Posted by D. at Saturday, November 05, 2011