I saw this new Canmake Highlighter in 05 Baby Beige at the local drugstore about a month or two ago and snapped it up immediately. I was hoping it would be like the original Canmake Highlighter that I bought a few years back in that I can use it for daytime without looking like a disco ball ^.^

Highlighter in 05 Baby Beige. All pictures taken in natural light without flash. 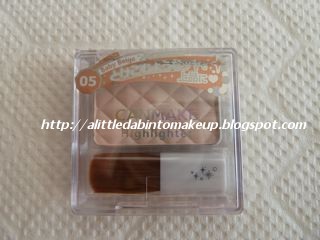 The highlighter is in the same functional and straightforward clear case with a ho-hum brush, but I use my own brush so no complaints here. It is unscented, like all other Canmake powders. And luckily for me, it's just as nice and smooth as the original highlighter and produces no dust whatsoever! Actually, I'd say it's an even better daytime highlighter than the original Highlighter in that the shimmers are super fine and pearlized. When worn during daytime, I get a really nice soft focus glow along with a brightening affect. There is no color in this powder, despite the beige-y appearance and name, so in effect it is a translucent finishing powder with pearlized shimmers for a glowy finish.

I would say the pearlized shimmer factor is somewhere in between Lavshuca Face Powder in Glow and DHC Q10 Face Powder in 01 Translucent Shimmer, and the powder appears denser when swatched than when it is actually applied to the face with a brush. I have tried to wear this at night too, waiting until after dark to apply. However, even under a direct source of light, there was just a luminous but subtle satiny glow on my face without any obvious sparkles that really jumped out at me. If you like subtle daytime highlighters, for the office for example, I definitely recommend this one! Oh, and did I mention it's cheap? Yes, it's only 550yen xD